There are only few story tellers in Tamil cinema whose films have high expectations from its time of official announcement. Auteur Selvaraghavan is one such story teller. He has engraved an everlasting place for himself in Tamil cinema with his unconventional film making. But he has been in a rough patch for few years now. For some reasons the film maker has delivered just 3 flicks in seven years. Even his last directorial NGK lacked the usual Selvaraghavan’s touch. The director has been looking for a spark to get back on track. Now, his recent film Nenjam Marappathillai which began production in the year 2016 when the horror genre was the trend got delayed for so long due to some unknown financial tussle. Finally, it has cleared every issue and has hit the screens. But is it Selvaraghavan-ish enough to bring back director Selvaraghavan to the winning zone? To know that let us get in to the movie review. 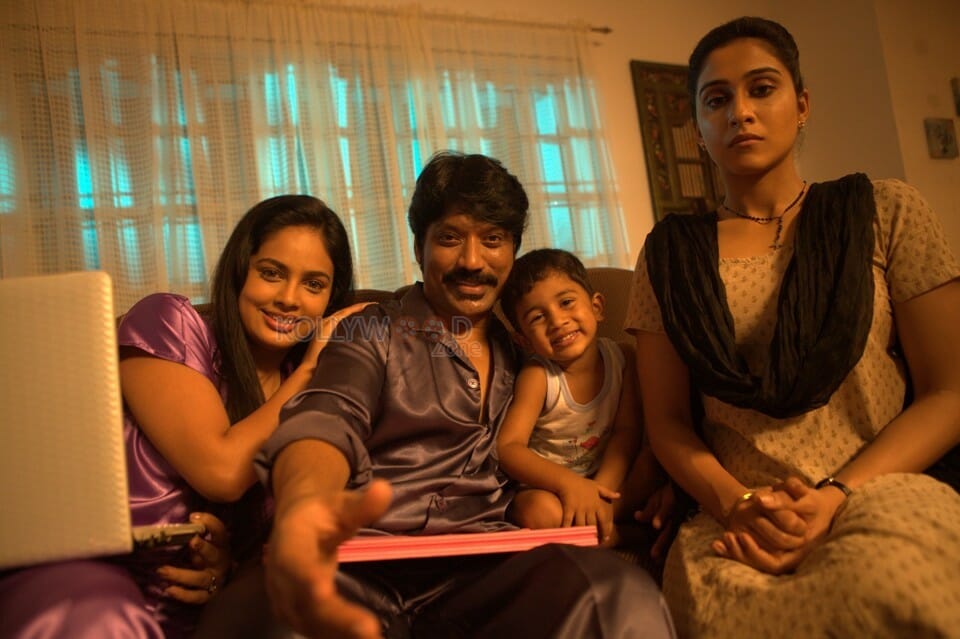 The film follows the life of Ramasamy aka Ramsay (S. J. Suryah). Ramsay is a rich businessman with no moral boundaries in life. In fact he has got where he is by deploying devious plans. He is married to a rich woman, Swetha (Nandita Swetha). They have a 4 year old boy, Rishi. Ramsay pretends to be an innocent and caring husband just to maintain a good relationship with his wife despite her arrogance. So that he can keep enjoying the luxurious lifestyle. In reality he is a cunning pervert. Swetha wants to employ a baby sitter to take care of her son. She chooses Mariam (Regina Cassandra), a pious woman who grew up in an orphanage. She has taken up celibacy to serve her lord and take care of the people in the orphanage.

Mariam goes to Swetha’s house on her joining day. Ramsay sees her and his perverted side comes in to play. He lusts after her. But he has got to be discreet as he cannot do anything to upset his wife. He ogles at Mariam with lust whenever she is doing her work. Like an animal waiting for its prey, he waits for the right time to unleash his evil act. At one point Mariam becomes aware of Ramsay’s ugly side. But still continues to work in the household to take care of Rishi and also to support her charity works. Ramsay concocts a cunning plan to get intimate with Mariam. But unfortunately things go down south when Mariam loses her life while Ramsay attempts to execute his plan. What Ramsay does to get rid of the body, will he get away with the crime or will he be brought to justice is what makes the rest of the drama.

Nenjam Marappathillai is equally actor S. J. Suryah film. It is only fair to say that nobody in Tamil cinema could have played the role as effectively as S. J. Suryah. He even gets our attention in the song sequences. Selvaraghavan has roped in the right individuals to deliver what he wanted. On the downside, the film is not only dark but also cold. A tragic incident has happened but Selvaraghavan’s writing makes it hard for us to feel for the character. Despite a gruesome act of Ramsay his characterization prevents us from loathing him. Other than that, the technical excellence of the film gets mediocre towards the end. The VFX failure breaks the intensity that the director managed to build throughout the flick.

Actor S. J. Suryah has showcased his acting prowess from time to time. His performance in this film outdoes his so far career best performance in Iraivi. He shoulders the film single handedly without much effort. Actress Regina Cassandra has bagged a well written meaty role. The actress has delivered an impressive performance. Actress Nandita Swetha does not have much to offer in the first half of the flick but she has a decent part to play in the second. The actress is adequate to the role but she could have done better.

On the technical front, music director Yuvan Shankar Raja disappoints with his tracks but he makes up for it with his spine chilling background score. Cinematographer Arvind Krishna starts of well but becomes sloppy in the climax portion. Editor Prasanna has done a decent job with his sharp editing.

On the whole, for people who knows Selvaraghavan’s body of work would know what to expect of Nenjam Marappathillai and their expectations will be quenched but others might have a different experience.