Actress Keerthi Pandian who made her debut in Tamil cinema with the adventure drama Thumbaa is back on screens with her second flick Anbirkiniyal. The survival thriller film is the official Tamil remake of super hit Malayalam drama Helen. The drama is based on father and daughter relationship. Real life father and daughter Arun Pandian and Keerthi Pandian have played the respective role on screen. Tamil cinema has seen a lot of crime thriller movies but not many survival thrillers. It is a genre that is not much explored in Tamil cinema. In fact it is hard to recall the last flick that was made under the genre in K town. Director Gokul has endeavored to use that less explored space in favor of him. But has he done it in an effective way with Anbirkiniyal? To know that let us get in to the movie review. 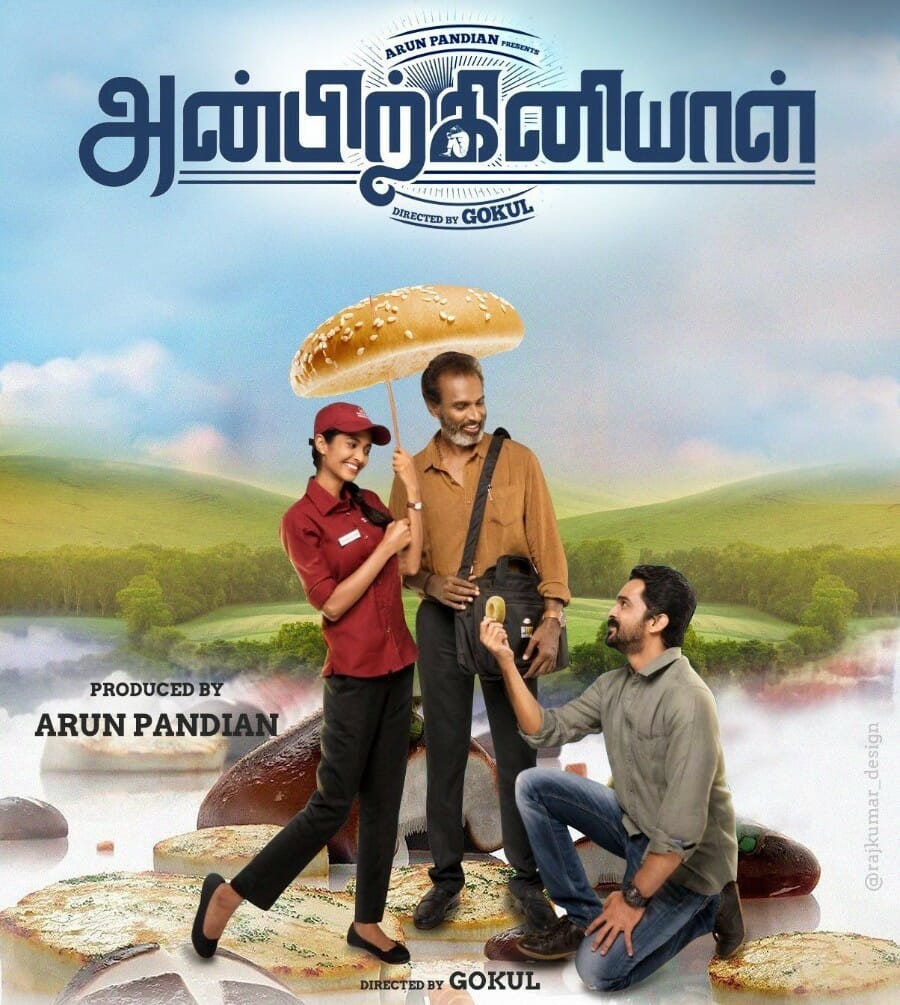 Anbirkiniyal  follows the life of a young woman Anbirkiniyal or Anbu (Keerthi Pandian). Anbu is an easygoing and responsible 25 years old woman. She lives with her father Sivam (Arun Pandian), who works as a LIC agent. They have an amicable relationship and she shares everything with her father. She understands his situation well and wants to take off the financial burden from his shoulders. And that is why she prefers to be an independent woman. She works in a food joint to support her education expenses. Not only she takes care of her expenses but also wants to aid her father by taking care of the EMI payment for their house – to do that she has planned to move to Canada to get a high paying nursing job. She is preparing for the immigration process.

Everything goes as planned for Anbu. But soon everything is put at stake when she and her boyfriend Charles are stopped by a cop. As Charles is drunk the cop takes them to the police station. Sivam comes to know about the incident and he is shocked to learn that his daughter has a boyfriend. He gets angry and disappointed that his daughter kept her relationship secret. He does not talk to her for the whole day. The next day he finds his daughter missing. Who is Charles, has he got anything to do with Anbu’s disappearance, why did Anbu keep her relationship secret from her father, and what has happened to her, is what makes the rest of the flick.

Survival thriller is a hard genre. Unlike crime thrillers here the film makers do not have the luxury of building drama as they wish. They have to develop the drama within a framework that they set to themselves. And having a single character fight for survival inside a closed space is even difficult as it cuts down the freedom to bring in different characters to keep the audience from getting bored. Abiding all these factors a story teller has to pen his story in an engaging way. That is why this is a rarely touched genre. Director Gokul starts the entertainer at a slow pace setting up the characters. He shows us how their regular day would be. The father and daughter relationship is well written. The moments that they share between them are sweet and enjoyable. Actors Keerthi Pandian and Arun Pandian make sure that it connects with the people with their natural performance. Once Keerthi Pandian goes missing the film takes off and gets intense.

Story teller Gokul manages to blend the emotional and thriller elements to perfection. He sets up the stage well initially by taking time exploring the father-daughter relationship. Even thrillers with bad story line turn watchable when the thriller element is maintained. Director Gokul gets that factor right and manages to keep the audience at the edge of their seat. Films like this need a strong technical crew to effectively materialize what is on paper. Undeniably director Gokul has brought together a capable technical unit. They are the pillars of the Anbirkiniyal . The only major down side of the flick is the wrong placement of songs in the already slow initial portions. It makes it difficult for us to stay engaged.

Actress Keerthi Pandian seems like a promising find for Tamil cinema. She deserves a lot of appreciation for picking up such a challenging role just in her second film. She has delivered an impressive performance in the role of a young woman fighting for her life under a tough situation. Veteran actor Arun Pandian shines in the role of a friendly father and later as a dejected father searching for his daughter. The rest of the cast has delivered a decent performance.

On the technical front, music director Javed Riaz has given impressive tracks and his background score in the survival portions are intense and affecting during the emotional portions. Cinematographer Mahesh Muthusamy has covered the flick in all best possible ways without losing the intensity. Editor Pradeep E Ragav has enhanced the work of his colleague with his razor sharp cuts.

On the whole, Anbirkiniyal has got almost every element that is necessary to cook an engaging survival thriller right which makes it worth a watch.