Kanithan was a long pending movie in Atharvaa’s career. A debutante director named Santhosh shaped this project. Kalaipuli.S.Dhanu under ‘V’ creations banner funded the movie. Catherine Tresa shared screen space with Atharvaa Murali for the first time. Sivamani also makes his debut as music composer. Tarun Arora, K.Bhagyaraj, Manobala, Karunakaran, Sunder Ramu, Aadukalam Naren, Naasar, YG Mahendra were part of the cast. The movie is releasing on Friday and a special premiere show was arranged for the press people. The movie is about Atharvaa who works as a journalist for a local channel. His skills were going in vain and his ambition was to work for BBC. At the same time, he falls in love with Catherine Tresa. 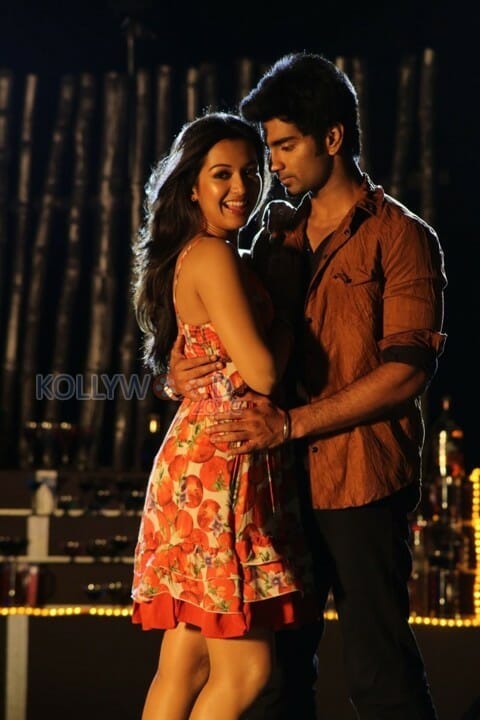 Things take a quick turn when police arrests him for making fake certificates. And he realizes that many youngsters are dragged under the same crime and he decides to find who is behind it. When he unravels the mystery, he finds out a mafia behind the scam. He slowly brings them down to justice and what happens to his ambition and lady love forms the rest of the story. Atharvaa is shaping up better in each movie. He is handsome, dashing and energetic as a journalist. He essays the role to perfection.

Catherine Tresa is just the usual heroine who comes for skin show and two song sequences. But she gives a ‘drool-worthy’ performance. Initially it was Jackie shroff who was roped inside to do the baddie role. But he was later replaced by Tarun Arora. There were more doubts regarding his performance initially. But he proved everyone wrong. He was completely evil and the way he portrayed the character was astonishing. Aadukalam Naren brings out the middle class father with lots of emotions. YG Mahendra and K.Bagyaraj were proven actors. So they don’t need any special mention once again.

Sivamani could have done lots more on musical score. Neither they are attractive or pulsating. Arvind Krishna’s cinematography is splendid and fabulous. No wonder Selvaraghavan prefers him each time. Bhuvan Srinivasan keeps the running time to check. But still few scenes in second half are draggy. Kalaipuli.S.Thanu is the producer and the production values are high. TN Santosh proves that he can be powerful as his guru AR Murugadoss with this movie.

Overall, Kanithan is an enjoyable and predictable thriller !