Actor Vikranth is back on screens with the sentimental drama Bakrid after his critically acclaimed crime drama Suttu Pidikka Utharavu and sport entertainer Vennila Kabaddi Kuzhu 2. Like his previous ventures the actor has given a neat and clear performance in the flick. It has been some time since Tamil audience has enjoyed a good film crafted on the relationship between a human and an animal. Director Jagadeesan Subu has tried to cash in on that and has come up with the first of its kind Indian film which speaks of the relationship between a man and a camel. 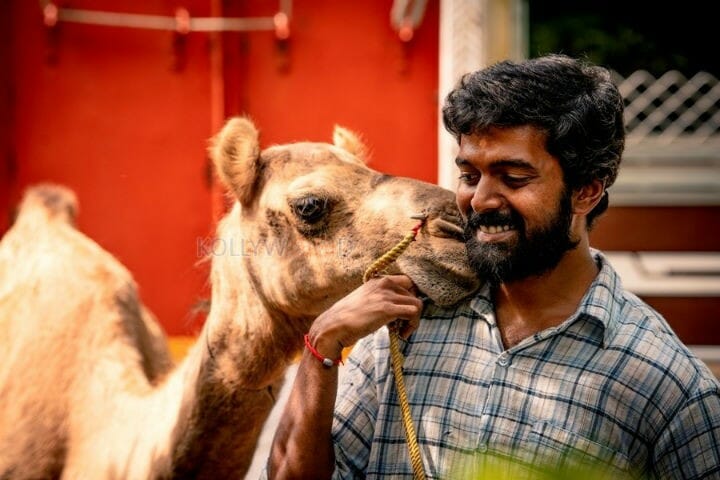 Rathinam (Vikranth), an innocent farmer wins his share of his ancestral land after a legal battle with his elder brother. He desires to start farming in the piece of land that he has won but lacks the financial source to do so. So he decides to approach the bank to apply for a loan to begin farming. But the officer in the bank tells him that he wants to see some ongoing works on the field in order to sanction him a loan. But to do that Rathinam needs money. His friend (Dinesh Prabhakar) points him to a moneylender who happens to be a Muslim whose family is getting ready to celebrate Bakrid. When Rathinam arrives at the moneylender’s home he witnesses a camel and its offspring. He also notices the moneylender yelling at his people for bringing home the offspring along with the mother as it will be morally disturbing to slaughter the camel in front of its own offspring.

Rathinam, who was noticing all this, gets fascinated by the little camel and asks the moneylender to give him the baby camel. But before deciding to take the camel to his home he gives a call to his wife Geetha (Vasundhara Kashyap) to see whether she is okay with it. She says she has no problem with it and hence he takes the camel to home. They begin to farm their land and grow the camel alongside their cows. Rathinam names the camel Sara after his late father Sarangan. Sara gets the attention of the villagers and they are also fascinated by the creature.

Rathinam develops a special bond with Sara. Everything seems to go well until Sara falls ill. When Rathinam gets a veterinarian to treat Sara, he advices Rathinam to leave the camel in the desert as the climatic condition and food in the locality is not suitable for the habitation of a camel. So without having any choice left Rathinam makes the hard decision to leave the camel in Rajasthan by the mode of lorry transportation. But he decides to travel with Sara to ensure that she lands in safe hands. The journey from Chennai to Rajasthan and did he leave Sara in safe hands, is what makes the rest of the story.

The intention and the message that the story teller intended to convey through Bakrid is good but it is the execution that has took a slight pitfall. There are many sweet little moments in the entertainer between Rathinam and his daughter and between the camel and Rathinam which are beautifully established. They are genuine factors that incite a pleasant feeling in the audience. But the film gets sluggish in the second half which is really a patience tester.

Actor Vikranth has delivered a fantastic performance of a man who is too emotional but keeps it with himself. The actor has clearly evolved as an actor and it is simply his career best performance so far of his journey in the industry. Vasundhara Kashyap is fitting in the role of a village homemaker and has beautifully added colors to the screen without any makeup. The rest of the cast has added strength to the film with their neat performance.

On the technical front, apart from being unnecessarily too loud at few places D. Imman makes his soulful music speak in places where the emotions cannot be put forth by means of dialogues.

Director Jagadeesan Subu’s has come up with a plot which only a handful of film maker would dare to touch. But the good intention of depicting the unconditional love between a man and an animal turns desperation in the second half where he drags the film with lengthy emotional scenes trying to establish a connection or to help us understand the love between the man and animal.

On the whole, Bakrid is a genuine attempt to depict the love between a man and an animal but struggles to connect with the audience after a certain point. But it is definitely a one time watch for animal lovers out there.