It is not very often that Tamil cinema audience get to witness sport dramas and in case of sport dramas based on women, the infrequency rate is further high. The sports film specialist, director Suseenthiran’s attempt to do a film on the rarely touched zone of Tamil cinema deserves to be commended but the endeavor alone is not sufficient to save Kennedy Club. Very predictable writing with the formulaic sport drama template has made Kennedy Club a tedious watch. 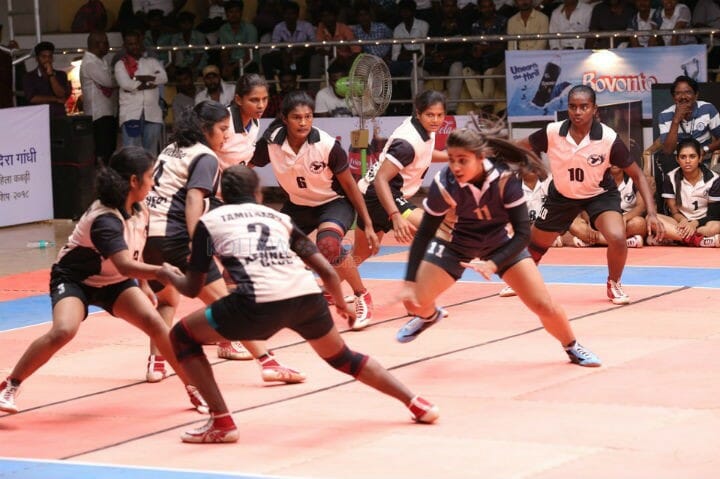 Savarimuthu (Bharathiraja) is a retired military man and a Kabbadi coach who is very passionate about the sport. His passion extends to a greater outlying that he splurges most of his life earnings to train an underprivileged yet highly skilled women’s kabbadi team in his village. For these women in Ottanchathiram a village in Dindugal, the sport is not just for passion but is also a source to get out of the poverty that their families are deeply submerged in by getting placed in a government job through sports quota. They play for the Kennedy Club which is trained by Savarimuthu.

The club after gaining attention through a lot of local matches gets promoted to take part in a national level championship. While the team is already facing heat from corrupt officials, unfortunately Savarimuthu falls ill due to a sudden heart attack which results in him having to reduce his activities. So a former student of him, Muruganandham (Sasikumar) is called up on to be an interim coach of the team. Muruganandham who works in the railway department immediately agrees to coach the team as the job he is in is obtained through playing the sport. Did Muruganandham and Savarimuthu guide the underdog team to glory and aid the players of the team to come out of the poverty state is what makes the rest of the story.

The biggest plus of Kennedy Club is the director’s decision to rope in real life players who are currently playing the sport. The moves of the players are authentic and do not appear to be staged even in a single shot throughout the film. The director has scripted the lives of the players hailing from economically weaker background in a realistic way which enables us to connect with the characters and empathize for them.

Actor Sasikumar has tried to play his part well to the maximum extent but the actor does not seem to fit in the role of a kabbadi player due to his physical appearance. Perhaps a change in the actor’s body language could have worked better. Even veteran director Bharathiraja is not convincing in the role of a senior coach. But the girls who also happen to be real life players of the sport have put on a spectacular show in the drama. The rest of the cast has given what was asked on them.

On the technical front, cinematography Gurudev’s frames have beautifully captured the sport from all angles; particularly few aerial shots at crucial moments were captured extraordinarily. Editor Antony’s spectacular cuts have complimented the frames of Gurudev well. D. Imman’s music ensured to give a spine chilling experience during the Kabbadi kabbadi chant uttered by raiders.

Story teller Suseenthiran has assembled every necessary top ingredients to cook a perfect sport drama but it is his decision to follow the formulaic sport drama template of an underdog team coached by a fervent coach and trouble arise for the team when a villain in the selection committee wants to derail their path to glory have made the drama to be just another ordinary sports film. The characterization and back story of the girls are well crafted which helps us to root for them. But there are some unnecessary emotional moments which slows down the flow of the film. Perhaps if the director had reduced the melodramatic tone and focused on the technical elements involved in the sports, Kennedy Club could have been a better sport drama.

On the whole, Kennedy Club is just another ordinary sports drama which has its moments but fails to keep us invested throughout the flick. The director’s indulgence in way too predictable writing has cost the film much.