MGR Magan has its bright moments but the problem is, as a whole drama, it falls flat. It offers entertainment in bits and pieces. Of all problems, MGR Magan suffers mainly because of how poorly it is written. The film moves aimlessly on a template plotline, few comedies are thrown at us, the father and son fight, the mother tries to hold them together, in walks a corporate businessman, we have a message, and then the end card. Oh yeah, add few lectures of family affairs and history lessons to it. There you go. You have MGR Magan.

Actor Sasikumar who was last seen on small screens in the sentimental drama Udanpirappe is back with his latest entertainer MGR Magan. As much as Tamil cinema heroes enjoy doing chic and modish roles, they equally enjoy playing a righteous short tempered rural man. But actor Sasikumar inclines a little more to doing the village guy with overflowing emotions. So, if not Sasikumar to play a rural guy, who else can it be? MGR Magan is a story about an assiduous father and his carefree son. Director Ponram struck a rhythmic chord with actor Sivakarthikeyan to deliver three hit ventures back-to-back. Will his latest drama with actor Sasikumar turn out to be a successful one too? To know that let us get in to the movie review. 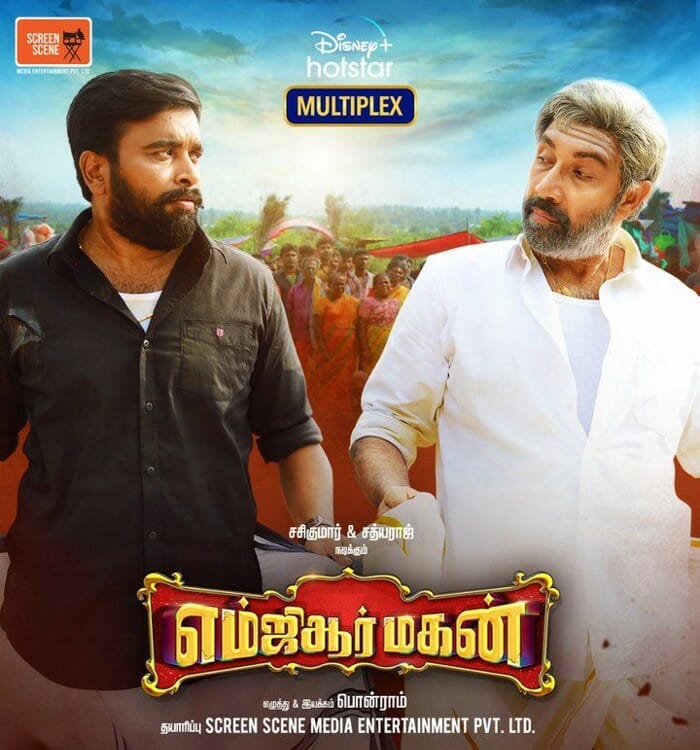 MGR Magan is set at the backdrop of a village near a hilly region. Anbalippu Ravi (Sasikumar), is a happy go lucky young man who comes around the village having fun and helping people whenever he could. His father MG Ramasamy aka MGR (Sathyaraj) is a hardworking man who has earned himself a reputation around the village as a naturopathy medic. MG Ramasamy is disappointed with his son as he does not take life seriously. But Ravi is not as aimless as his father thinks he is. He does have an ambition to appear on the front page of the newspaper. He is very persistent about it and vows to make it happen one day. His uncle Agni (Samuthirakani) tags along with him and swears not to wear a vesti until his nephew make it happen. At a point the relationship hits a rough patch, and the father and son duo refrain from talking to each other. Ravi’s mother (Saranya Ponvannan) does everything in her power to keep the family together.

Anupriya (Mirnalini Ravi), Ravi’s lover, on her part, does silly things in her attempt to reconcile their relationship. But she hits the road block every single time. In the meantime, we have a materialistic businessman (Pala. Karuppiah) in to the picture who wants to turn the hill near by the village in to a quarry. MG Ramasamy collects many significant herbs for the medicines he prepares from the hill, and when this news reaches him, he decides to fight the businessman. He takes the matter to the court. Initially, the case moves fine, but suddenly the verdict is ruled in favor of the businessman. This breaks MG Ramasamy. Will Ravi come to fight his father’s battle, and will his ambition of making the front page headlines of a newspaper come true, is what makes the rest of the flick.

MGR Magan has its bright moments but the problem is, as a whole drama, it falls flat. It offers entertainment in bits and pieces. For instance, Samuthirakani’s portions are full filled but those portions are followed by unnecessary or tedious sequences. Of all problems, MGR Magan suffers mainly because of how poorly it is written. The film moves aimlessly on a template plotline, few comedies are thrown at us, the father and son fight, the mother tries to hold them together, in walks a corporate businessman, we have a message, and then the end card. Oh yeah, add few lectures of family affairs and history lessons to it. There you go. You have MGR Magan.

Director Ponram’s films does not really have a story and rely heavily on the comical flow. If you take a look at his filmography Varuthapadatha Valibar Sangam, Rajini Murugan, and Seemaraja, they all have this thing in common. They are light hearted family dramas that bask on the comical performance of actor Sivakarthikeyan. And that is exactly what MGR Magan lacks. When you are basing your entire film on comedy, it is important to cast the right artists with impeccable timing that can make the comedy work for you. Of course, there are his regular artists Sathyaraj and Samuthirakani. But the trouble lies with his lead hero. Story teller Ponram’s first Achilles heel is his writing, and second is his decision to cast actor Sasikumar who’s timing is awful to the extent that even good jokes do not land. Perhaps, if actor Sivakarthikeyan had played the lead, maybe, maybe MGR Magan could have had an impact.

With so many films almost with similar characters under his belt, actor Sasikumar should have pulled of the role without efforts. But he does not. He does well in the portions that are well under his comfort zone but struggles in his usual weak spot, the romance. His comical timing is not good either. Veteran actor Sathyaraj is under used yet he makes his presence felt. Actor Samuthirakani essays a contrary role to what he usually does, and shines in it. Actress Mirnalini Ravi is just there to avoid the heroine’s void. Actress Saranya Ponvannan is impressive as always. Actor Pala. Karuppiah has done justice to his role. The rest of the cast has delivered what was asked of them.

On the technical front, music director Anthony Daasan’s songs do not get our attention. His background score is just deafening and irksome. Cinematographer Vinoth Rathinasamy’s frames are adequate. Editor Vivek Harshan’s trims could have been better.

On the whole, MGR Magan could have been in the line of Varuthapadatha Valibar Sangam had it had a better writing, but it does not, and even director Ponram’s regular cast could not save it.