Actor Vikram who has been trying to be a good father by making time in his busy schedule and being with his son Dhruv Vikram while he shoots for his project, goes a step further to boost his career and co-stars a film with him. Actor Dhruv Vikram who had to take in a lot of heat for the toxic character that he essayed in his debut venture Adithya Varma goes head-to-head with his proficient performer dad in Mahaan. Director Karthik Subbaraj garnered the attention of Tamil audience right away with his debut drama Pizza and followed it by another stunner Jigarthanda. He has earned an image of a film maker that always attempts something different. This time around he brings the father and son duo together for a project for the first time. So, how has the entertainer come out? Will Mahaan be a successful venture for actor Dhruv Vikram? To know that let us get in to the movie review? 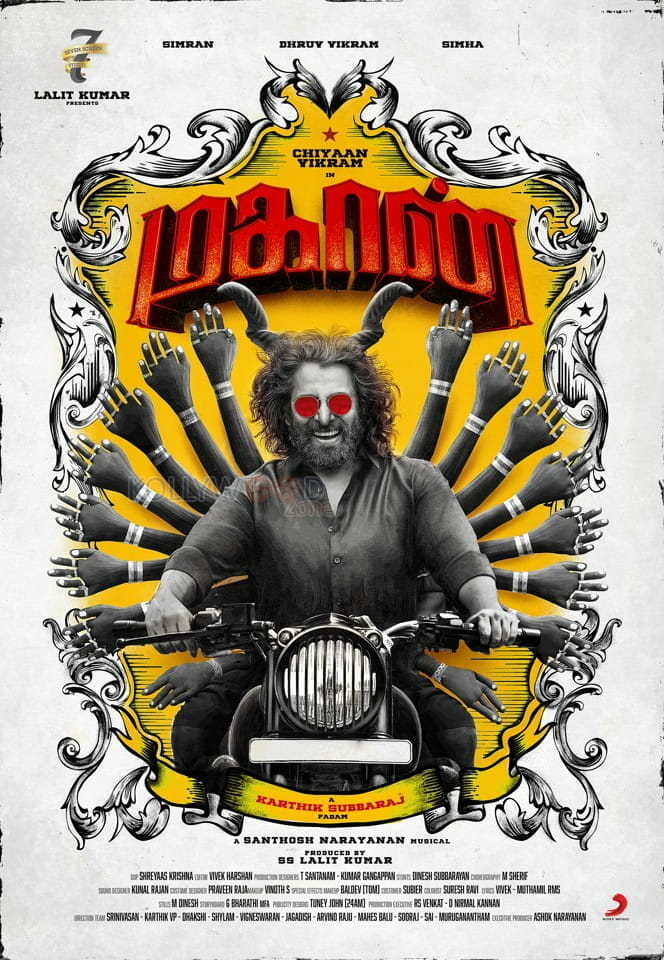 The entertainer follows the life of Gandhi Mahaan (Vikram). Mahaan opens in 1968, where we witness three friends Gandhi Mahaan (Vikram), Sathyavan (Bobby Simha), and Gnanam (Vettai Muthukumar) getting in to fight over a card game. Fate directs them to different walks of life. Fast forward to 1996, Gandhi Mahaan is a school teacher. As the name gives away, he is brought up in a Gandhian family and grows up to be a man of principle. He is married to Nachi (Simran), who is also from a Gandhian family to whom even her husband going to watch a film is something of a delinquency. Gandhi Mahaan is increasingly growing agitated with his life. Things upend when Gandhi Mahaan hits the midlife crisis precisely when he turns 40. He comes across his childhood friend Sathyavan (Bobby Simha) who runs a bar. Memories come rushing in and he slackens a bit and spends the night partying. The following day, his wife Nachi finds him drunk. Shaken by his behavior she takes their son Dadabhai Naoroji (Dhruv Vikram), and leaves him.

Opportunity presents itself to facilitate Gandhi Mahaan’s move to transgressive life. His wife’s departure gives him the boundless freedom, and he decides to let loose and walks to the contrast side of things that he has stood against in his entire life so far. He crews up with Sathyavan and rebrands his liquor business as Soora. Couples of years go by, Gandhi Mahaan and Sathyavan have a life of luxury. But that is not going to stop them from stepping up their game. They devise a plan to set up an organization that controls the supply of alcohols in Tamil Nadu. They face opposition. But what does a hero do, he beats all of them and hoists his flag in the state. Years pass, now Gandhi Mahaan and Sathyavan have become powerful personalities in the society. The film moves to 2003 period, the government pass a law that would allow only the sale of approved liquor in the state. Gandhi Mahaan and Sathyavan organize a meet with Gnanam, their other friend who comfortably happens to be a politician.

A deal is done and their brand Soora is stocked across all bars. Moving to 2016, they run a mafia syndicate in Tami Nadu calling the shots. Just when they seem formidable, in walks Dadabhai Naoroji as a special op cop appointed to take down the syndicate. Gandhi Mahaan is caught between his best friend and his son. Whom will he choose, to what extend would he go to save his business or will he try to save it, is what makes the rest of the flick.

Director Karthik Subbaraj draws out the core concept from auteur Vince Gilligan’s cult classic Tv series Breaking Bad and gives it a spin of his own to build Mahaan. The problematic part with the spin he gives is, it is a Tamil cinema-esque spin. A tantalizing urge and exertion to heroizing the hero. The reason for why Breaking Bad was celebrated so much was for the characterization of its lead character which accepts its flaws rather than trying to point its helplessness as a defense. But here story teller Karthik Subbaraj goes an extra way to save his lead character to paint him as a Mahaan.

In a sense Mahaan is a very confusing drama. It feels like director Karthik Subbaraj wants to ask a lot of questions about life, and ideologies that we chose to make life better. But he just drops a question and moves on to the next without exploring them. For instance, he seems to ask what is wrong with being a teacher and content in one’s life. But then the flick does not go to the roots of this piece, or does care to elucidate what it wants to achieve clearly. In the end Mahaan leaves us with a lot of unanswered questions than the ones it seemed to vaguely answer.

Actor Vikram is dashing and full of life as usual. He cakewalks his character with absolute fineness. Actor Dhruv Vikram seem like he has got a lot of ground to cover to be able to shoulder a flick on his own. Actor Bobby Simha has given his best. Actress Simran has not lost her touch and has done justice to her part. Actor Aadukalam Naren is effective as always. Actor Gajaraj is adequate. Actor Vettai Muthukumar is passable. Actors Sananth, and Deepak Paramesh chips in and have played their part well. The rest of the cast has delivered what was asked of them.

On the technical front, musician Santhosh Narayanan is not at his best. Yet his rhythm is entertaining. His tracks are decent. His back ground score add value to the drama. Cinematographer Shreyaas Krishna has covered the entertainer in the best ways possible. Editor Vivek Harshan’s scissor work compliments the work of his colleague well.

On the whole, director Karthik Subbaraj’s endeavor to do a Breaking Bad with Mahaan ends up as a catastrophe that is grim to sit through.