Adithya Varma marks actor Dhruv Vikram’s venture in to Kollywood. After years of clutter and disarray in the making of the film, finally Adithya Varma has hit the theaters worldwide. From the conflict between the production house and director Bala due to creative difference, to last moment holdups in release, Adithya Varma has been in the news for a fair amount of time garnering more than enough attention on the project. Also, actor Vikram’s journey along with the unit throughout the movie added to the cause. Even the promotional events set up for the flick saw the father and son duo together promoting the romantic drama. 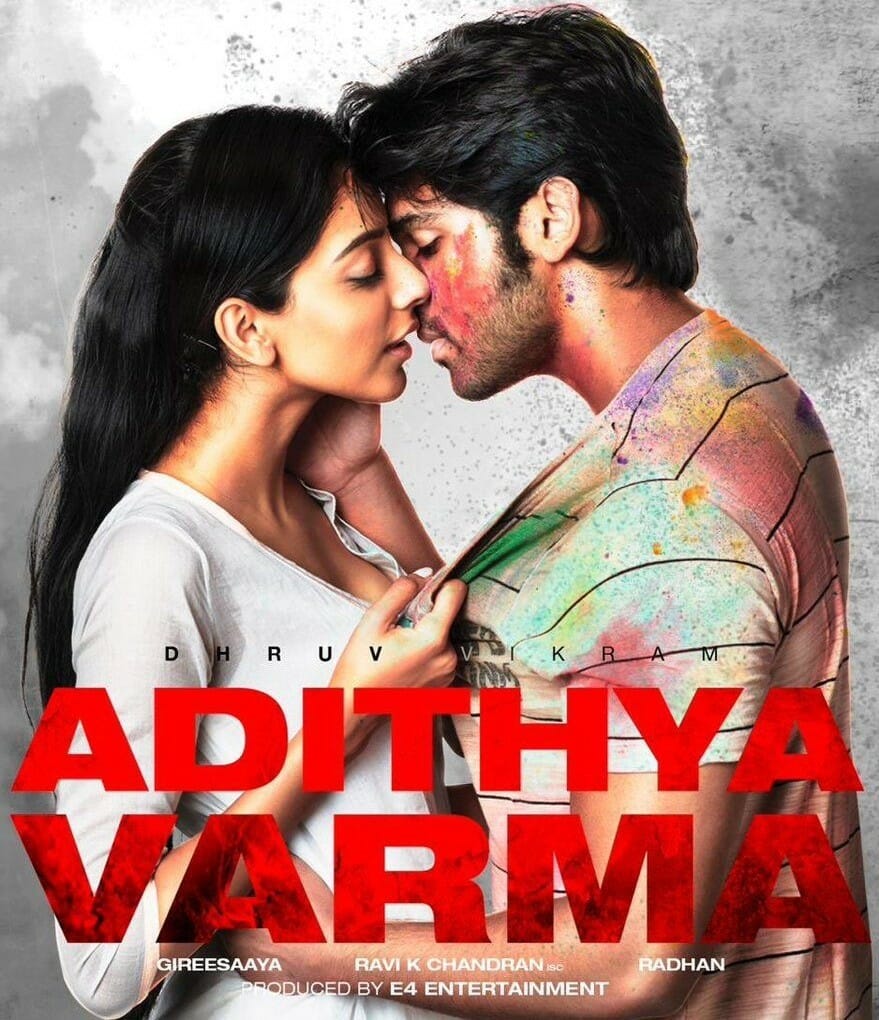 Director Gireesaaya who worked as one of the assistant directors for Arjun Reddy has remained faithful to the original version. But it is safe to say that the Tamil version is slightly a softer version of Arjun Reddy. The film which was recently remade in Bollywood as Kabir Singh received criticism from all corners. But thankfully film maker Gireesaaya has worked on those objectionable abusive and self destructive factors in the Tamil version. Since abusive behavior is the core essence of the lead character, writing them off totally would be an impossible feat and eliminates the need for the film in the first place. Hence he has alleviated the intensity of the character with few rational changes.

The very opening scene of the flick attempts to give away a fraction of the reason as to why the lead character in the film behaves the way it behaves. Then comes the introduction of the lead character Adi aka Adithya Varma (Dhruv Vikram), with a young beautiful woman getting zestful. Just when they are about to get further, someone bangs on the door. And that someone is the fiancé of the woman who is getting cozy with Adi. After the bang at the door, realizing what she was about to do she backs off. Adi who do not react well to rejections, gets enraged and picks up a knife nearby, pointing at her he bullies her to get undressed. Though, he comes to sanity after that, his reaction in the sane state is furthermore worrisome. He puts some ice cubes in his groins to what purpose, no one knows. This is the recitation of what you are about to get for the next couple of hours. The director establishes the traits of his lead character forthright without taking much time.

The plot switches between reality and the past trying to narrate what has turned Adi the way he is. In flashback, he is a house surgeon with the same attitude. He sees Meera (Banita Sandhu), a fresher in his college. He falls for her in the first sight and again he behaves in his own style. He walks straight in to her and plants a kiss on her cheeks. Meera does not seem to be offended by this action; rather she reciprocates his love. Then the love at first sight transforms in to madly in love zone. This does not incite a good reaction in Meera’s strong caste adherent dad which leaves Meera with no choice but to leave Adi. After Meera’s departure from his life, things spiral down the abyss further resulting in Adi’s complete out of control behavior. What will happen of Adi, will he manage to return to normal state in life, is what makes the rest of the flick.

If you had watched the Telugu and Hindi versions of the movie you would know exactly what to expect of Adithya Varma. While the Tamil version is the ditto of the original, in order to cool off some of the heat the entertainer generated in other languages the film maker has made minute but key alterations to the script. However, the character’s aggressive, reckless behavior and the justification of it still seem only to be silly and rambling. Because how would you explain his action of making his nurse to hold his smoke while treating patients? All his actions only bring pain for people around him, yet they seem to not only justify it but to glorify it by seeing him as a cool bad ass youngster.

Dhruv Vikram plays Adithya Varma, an alcoholic surgeon with aggressive and self destructive behavior, simply a character which is unapologetic for its actions. The character is quite a challenging take for a debutant, especially after impressive benchmark performances delivered by Vijay Deverakonda in Telugu and Shahid Kapoor in Hindi. Even despite huge pressure Dhruv Vikram has delivered a neat performance for a debutant. He has got in to the Arjun Reddyish tone but with few difficulties. He has a long way to go to get to the standards that his father has set in the industry. Actress Banita Sandhu is apt as the innocent and silent girl. The rest of the cast has delivered adequate performances.

On the technical front, cinematographer Ravi K Chandran’s frames are huge plus for the entertainer. Musician Radhan has given what was required for the movie, neither good nor bad.

On the whole, even Dhruv Vikram’s notable debut performance does not make Adithya Varma as an entertainer for everyone.