This weekend actor Yogi Babu has had three releases two as comedian and one as a lead hero. His last release as lead hero Dharma Prabhu opened up with mixed reviews and did not fare well in the box office. And even Gurkha looks similar to Dharma Prabhu in the context of not begin a whole entertainer but is slightly on higher note in terms of comical relief. But it is high time that the actor realizes that the eminence of his comical relief is degrading gradually film after film. 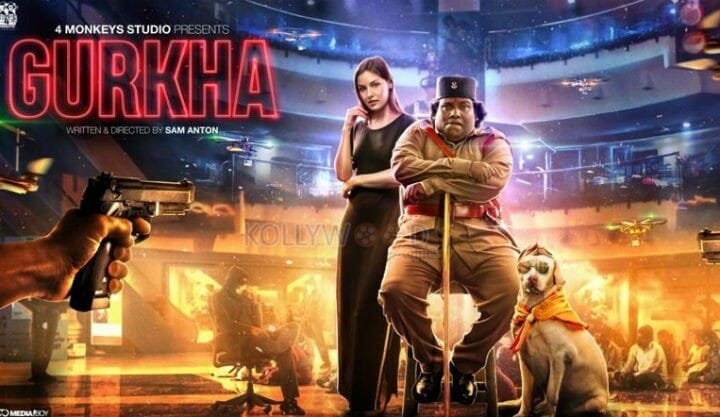 Bahadur Babu (Yogi Babu) hails from a North Indian Gurkha family that has migrated to Chennai a generation ago. He desires to become a cop. But his attempt to get in to the police department goes in vain and he ends up in a mall security job in order to earn his daily bread. He does not like his job and keeps whining about it. While in the job of a security guard he meets a foreigner Margot (Elyssa Erhardt) who comes to the mall to watch Baahubali 3. Bahadur addresses her as ‘market’ and tries his luck to charm her. Meanwhile, a group of terrorists enter the mall and bring it under their control. This is what makes the first half of the film.

Now, being in a hostage situation we get to know that Margot is an American ambassador. Seriously Mr. Sam Anton, American ambassador wanting to catch Baahubali 3? Does it meant to evoke laughter in us? All the people and VIP’s present in the mall are held as hostages. But the terrorist gang has no idea about the presence of Bahadur Babu and his counterpart (Charlie) and the doggie inside the mall. And just like what terrorists in movies do, they demand the government to pay a huge ransom by threatening to slay the lives of people inside in case of denial. Now, with the assistance of the Bahadur Babu, his friend and his dog, the police officials make their move by communicating with him through his old mobile phone. Did Bahadur Babu manage to save the lives of the innocents held as hostage inside the mall, is what makes the rest of the movie.

Well, Gurkha shines in bits and pieces but as a whole entertainer it definitely is a big disappointment. A lot of comical portions in the film are blunt and unpleasant. It is comprehensible that logics are left in air in order to make people laugh in these sort of flicks but when that main agenda fails and when illogical comical scenes fails to incite laughter, one cannot help but point out the illogicality.

Some of Yogi Babu’s one liners are thoroughly enjoyable. But that alone cannot make him a leading hero of a film. Even in case of veteran comedy actor Vadivelu playing the lead roles he makes few changes in the body language and fitting modulation in dialogue delivery. In order to carry a whole film on his shoulder Yogi Babu has to work more on the character that he portrays. Actors Anand Raj, Charlie, and Manobala are a big plus for the comedy entertainer.

Director Sam Anton’s leverage to pen scenes that are far from reality considering the genre of the drama is one of the major causes for the collapse of the entertainer for he has stretched the genre too much to his own advantage.

On the whole, despite having today’s leading comedian Gurkha toils to incite laughter in us and falls short of being a complete entertainer.