Summary of Lock Up Movie

Lock Up sets its premise with the murder of an inspector Sampath (Mime Gopi). The commissioner of police assigns the case to a cop in the station, Ilavarasi (Easwari Rao). Then enters Murthy (Venkat Prabhu) and his sidekick Vasanth (Vaibhav), both are in a desperate state to obtain a promotion, and comes across as characters that would go to any extent to achieve it.

In the unprecedented situation the world is in, entrepreneurs throughout the world are turning their attention towards the online platform to sustain their businesses. Tamil cinema producers are no exceptions to it as permission to reopen theaters does not appear to come out in the near future, and as the consequence of it the OTT platform finally seems to have gotten its acceptance among Tamil film producers. The platform first explored by Jyothika’s Ponmagal Vandhal amidst high opposition from theater owners across Tamilnadu was followed by Keerthy Suresh’s Penguin, Varalaxmi Sarath Kumar’s Danny, and now Vaibhav’s Lock Up. 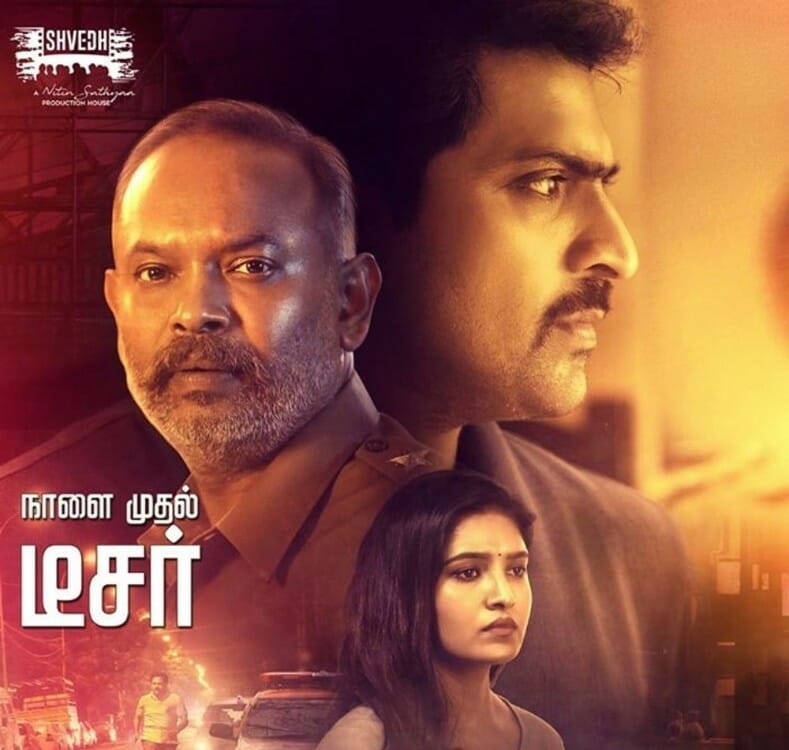 Actor Vaibhav, who is on a success lap for more than a couple of years with his low budget films like Meyaadha Maan, Sixer, and Taana, is back with an entertainer which also stars his best buddy Venkat Prabhu. Unlike their favorite comedy genre, it is interesting that they have chosen to go with a serious whodunit drama. Debutant film maker SG Charles has built a decent plot for the investigative thriller and has endeavored to infuse all the indispensable elements to make a good thriller. But has the director succeeded in his attempt? To know that, let us get in to the review.

Lock Up sets its premise with the murder of an inspector Sampath (Mime Gopi). The commissioner of police assigns the case to a cop in the station, Ilavarasi (Easwari Rao). Then enters Murthy (Venkat Prabhu) and his sidekick Vasanth (Vaibhav), both are in a desperate state to obtain a promotion, and comes across as characters that would go to any extent to achieve it. Murthy is sent to the crime spot first and up on his arrival he begins to look out for evidence. Later, a local thug surrenders himself to the cops confessing to the murder of the inspector almost closing the case.

Ilavarasi begins her investigation in to the murder case. When the surrendered suspect is asked to enact how he managed to take out inspector Sampath, Ilavarasi finds his statement incongruous and suspect foul play. The Knife with which inspector Sampath was hacked to death turns out to be different from the one that was found on the murder spot. Ilavarasi realizes there is much more behind the murder and it is not a simple open and close case. She begins to collect information and evidences related to the case with the assistance of Murthy.

Meanwhile, on the same day of inspector Sampath’s murder, a kid walks in to the police station and requests the cops to find out his missing mother (Shamna Kasim). On further investigation the cops learns that the missing mother was a house maid, who has committed suicide by jumping off a flyover. With little investigation on the suicide Ilavarasi begins to suspect that there is a connection between the two cases. Who killed inspector Sampath, was the mother’s death really a suicide, did Murthy and Vasanth have something to do with these deaths indirectly, is what makes the rest of the flick.

Generally, in Tamil cinema the audience are more used to movies which are based on ‘the good vs. the bad’ theme. But for a debutant director, SG Charles has daringly chose to move away from it and has based his script on exploring the grey side of two of his lead characters. Besides that he does not reveal his lead characters nature altogether at once but he does so gradually at regular intervals. Also, he has put to use the twists in the tale factor to keep the audience invested. On the down side, other than the lead characters rest of the characters in Lock Up are weakly sketched. In fact they do not have much to do in moving the drama. Forced and redundant twists in the plot, breaks the flow of Lock Up and makes it difficult for the audience to stay connected.

After witnessing actor Vaibhav in comical roles for quite a long time, it is refreshing to watch the actor in a serious role. He has done justice to his role. Director Venkat Prabhu has returned to acting after a long gap but has scored well than rest of the actors in Lock Up by pulling off his different shades role with ease and garners our attention towards him throughout the movie. Despite half baked characterization actress Easwari Rao shines in her role as a cop. The much expected actress Vani Bhojan has too little to do in affecting the flow of the plot and to a great disappointment seems to have brought on board only to fill up the romantic track. Actress Shamna Kasim has done a decent job in more sort of a guest appearance role.

On the technical front, musician Arrol Correli adds to the thrilling moments through his background score. Cinematographer Santhanam Sekar’s frames have done a decent job in covering the drama. Surprisingly, Lock Up has lip sync issues on certain portions possibly caused due to the improper adaptation to the OTT platform.

On the whole, despite drawing out an interesting plot debutant director SG Charles has squandered the chance of turning Lock up in to a solid investigative thriller.