With time, the OTT platform is beginning to see big budget flicks, even of big stars landing in on its platform. Though, the Bollywood entertainment industry has already embraced the OTT platform to an extent, the South Indian cinema industry is still hesitant to place its balls on it. With Jyothika’s Ponmagal Vandhal, Keerthy Suresh’s Penguin, Varalaxmi Sarath Kumar’s Danny, and Vaibhav’s Lock Up being the only few entertainers previously reaching the audience on their hand devices, in comes a decent budget film Silence. From trying to craft the nature of his lead characters in an intriguing way to attempting to keep the audience hooked with split screen horror angles, director Hemant Madhukar has ambitiously moved things. But has he succeeded in his attempt? To know let us get in to the review. 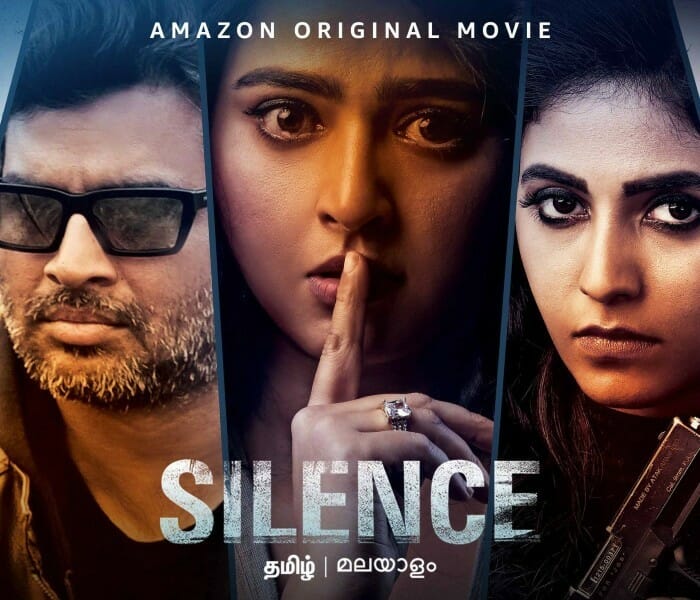 Silence begins with depicting an event that took place in the 1970’s on a Christmas night in a villa nearby Seattle in the U.S. A young couple are entertaining themselves with wine, music, and dance. Moments later, the girl begins to head upstairs while the boy goes to the basement. Bam, we have the conventional thrill elements the flickering of bulbs and demonic background score. The girl begins to walk towards the basement and shrieks at the sight of her brutally murdered boyfriend. The crime goes unsolved and as the result the house is tagged haunted around the surrounding. The scene cuts to 2019 where the house is bought and renovated except for the basement by a Colombian businessman who lists the house as a rental property.

Then we get the introduction of our protagonist Sakshi (Anushka Shetty), a deaf-mute woman who grew up in an orphanage. Sakshi is a talented artist and her art works are well received. She displays her works at exhibitions and raise funds for the orphanage. During one such event a much celebrated cellist Anthony Gonzalves (Madhavan) comes across Sakshi and is smitten by her. He purchases Sakshi’s painting for a million dollar. Sakshi expresses her gratitude and informs him that half of the money will be going to the orphanage. Then the eventuality happens; Sakshi falls for Anthony Gonzalves in no time. Sakshi’s close friend Sonali (Shalini Pandey) has trepidation over Anthony Gonzalves. In spite that Sakshi gets engaged to him.

One day Sakshi and Anthony Gonzalves go on a short trip to the haunted house just to see a painting that Sakshi’s is more interested in and plans on replicating. The couple reaches the place and gets in to the house, but before we could settle in, Anthony Gonzalves is murdered in the exact pattern as the guy who was murdered in the 1970’s. Shocked Sakshi flees for her life and wakes up in a hospital. In walks Maha (Anjali), a detective and Michael Madsen, a cop in the Seattle Police Department to investigate the mysterious murder of renowned cellist Anthony Gonzalves. Their every attempt to solve the case ends in a road block. Meanwhile, Sakshi’s close friend Sonali is found to be missing since the murder. Does Sonali’s disappearance has anything to do with the murder or is there a ghost angle to the murder, is what makes the rest of the flick.

The strength of any murder mystery thriller depends on the knots that it knits at the beginning, then the gradual unfolding of the knots, and startling revelations towards the end. Silence knits the same clichéd knots that many thriller films have done in the past and the twists in the flick are so predictable that one can foresee what is coming even after missing out few minutes of the drama. The director’s minimal use of visual narrative and predominant deployment of voiceover narrative kills the thrill of the thriller entertainer. There are also some key elements which were used to lure the audience’s attention initially but were left out half way through. For instance, the speech and hearing impairment of the lead character which seemed like some sort of allegory has no real impact in the plot. The rest of the characters are also half baked and walk in and out of the plot to the comfort of the story teller.

Though it is good to witness actress Anushka Shetty after quite a while, one could clearly agree it is surely not one of her best performances. Also, the weak characterization makes it even difficult to bear. Actor Madhavan who has been away from acting for quite some time has returned to acting. He has a very short screen time, more sort of extended guest appearance. But he is the saving grace of the film and essays off his different shades role with ease and makes his presence felt in short phase. Actress Anjali suffers in an awkwardly misplaced role. Surprising the much expected Kill Bill star Michael Madsen’s character has no depth in affecting the flow of the plot and only raises the question of his presence in the flick. Actress Shalini Pandey struggles even in a simple role.

On the technical front, musicians G. Girish, Gopi Sundar and Vishwajeet Jaykar have done a decent job to make thrilling moments effective. Cinematographer Shaneil Deo’s frames have wonderfully covered the beauty of Seattle, especially during the night. Editor Prawin Pudi’s pointless use of split screen leaves us in splits.

On the whole, director Hemant Madhukar ambitiously attempts to dish out an interesting thriller but it is his own lazy writing and narrative style that has squandered the chance of making one.