Appathava Aattaya Pottutanga, the film which has been in the box for a long time now, has finally come to see the day light. Thanks to the vigorous growth of OTT content platforms. Age is just a number, it is never late to fall in love, and it is the responsibility of the young to take care of the old are the messages that director Stephen Rangaraj’s Appathava Aattaya Pottutanga wants to drum. Late actor Chandra Haasan who is known for getting under the skin of the character he portrays, has played the lead role in Appathava Aattaya Pottutanga. He is accompanied by a bunch of senior artists. So, how has one of the greatest artists of Tamil cinema’s one final show come out? To know that let us get in to the movie review. 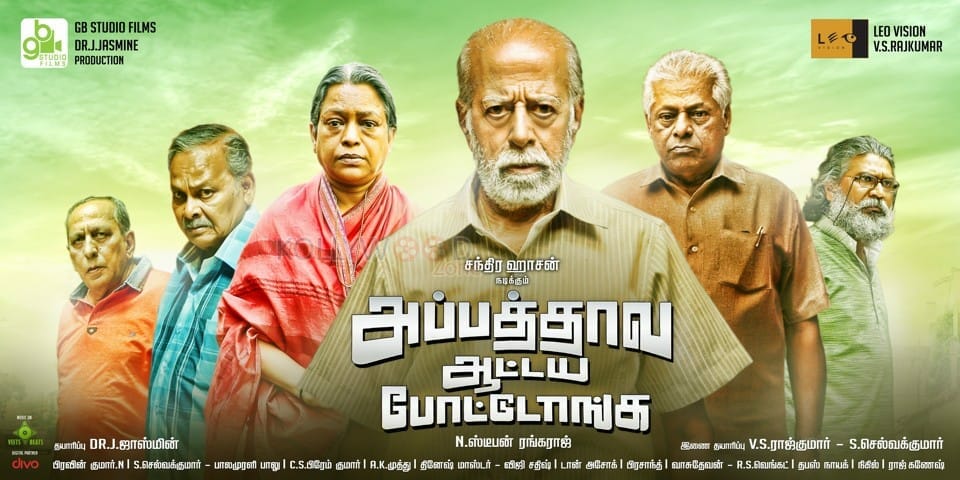 The film revolves around the lives of a group of elderly people. Director Stephen Rangaraj does not take much time to establish his main characters. He does it right away when the flick begins to unfold. We see what kind of existence elderly people have in their own home and how they are mistreated by their children, and get sent to the old age homes. When life puts them in tough spot, it also offers them solace in their new found home. Fortunately, or unfortunately, the old age home is where they experience peace. They get the opportunity to meet with people of their age and relate with them. Ramasamy (Chandra Haasan) is one such old gentleman. He has spent most of his time in life being in solitude. The old age home offers him a shot at having a relationship. He meets Meenakshi (Sheela) in the home and they both form a good rapport. Eventually, their relationship culminates in to a healthy relationship. But things take a turn, when they decide to get married.

Ramasamy has no one to worry about to convey or consult with the decisions he makes in life. But that is not the case with Meenakshi. She has got a son, daughter-in-law, and the family’s prestige to upkeep. When her family comes to know of her relationship with Ramasamy, they express a strong disapproval. Being cornered, Ramasamy and Meenakshi is left with no options but to elope and get married. They indeed make that decision. To escape from the clutches of Meenakshi’s son and his hooligans, they seek the help of Ramasamy’s college buddies (Delhi Ganesh, Shanmuga Sundaram, Kathadi Ramamoorthy, and Jaya Rao). Together they decide to flee to the neighboring state, and start a new life. They set up on their journey but it does not go as they planned. What happened to them, and will Ramasamy and Meenakshi tie the knot, is what makes the rest of the flick.

Cinema industry has always been and will continue to be for the young and able. We do not get many films that focus on the lives of senior citizens. It is not a system in place just in Tamil cinema, but it is the case, even in world cinema. For that reason alone, story teller Stephen Rangaraj deserves appreciation. And the producer for entertaining such a script. Barring the star power, the title of an entertainer is the first thing that resonate with the audience. When a film is christened with Appathava Aattaya Pottutanga, it gives us a hint of what to expect of the flick. But the issue with Appathava Aattaya Pottutanga is, it only offers what it hinted in bits and pieces. If you buffer it expecting it to be a comical feast, there might be a slight disappointment. As director packs it with a fine share of sentiments.

The comical portions of the flick can be segmented in to three categories. Exceptional comedy pieces, average funny scenes, and the ones that do not land well. Given the plotline and the ensemble cast on board to depict it, Appathava Aattaya Pottutanga should have easily been a solid laugh riot. But it has not. The culpable player here is story teller Stephen Rangaraj himself. There is a pattern in which he has worked his script. We are bestowed with few minutes of comedy then sentiment is infused in to the proceedings, then it gets comical, and then . . . this trend continues throughout the flick. There is nothing wrong with the message director Stephen Rangaraj intents to drive home. But Appathava Aattaya Pottutanga would have been much better had he chose to make it as an out and out comedy flick.

As usual actor Chandra Haasan has pulled of the role effortlessly. Actress Sheela is rightly cast and does justice to her role. Veteran actors Delhi Ganesh, Shanmuga Sundaram, Kathadi Ramamoorthy, and Jaya Rao have done their part well. They have let their experience play. And what it does is, it has turned even ordinary comical sequences in to an enjoyable one.

On the technical front, music director S. Selva Kumar & Balamurali Balu’s tracks are average. But the background score is better and add value to the flick. Cinematographer N. Praveen Kumar’s frames are adequate. While his colleague editor C. S. Prem Kumar is smooth with his cuts.

On the whole, Appathava Aattaya Pottutanga sets high expectation at the beginning but towards the end falls slightly short of the very expectation it set.