Even low budget films today have the luxury of playing with a range of angles to shoot from. Especially the aerial shots. Vattam is the latest low budget drama in Tamil cinema to have exploited that luxury extensively. The film is about a man who is trying to deal with his breakup but gets entangled in a kidnapping which further deepens his tragic situation. Actor Sibiraj who was last seen in the mythological thriller Maayon is back on screens with his hyperlink action movie Vattam. Actress Andrea Jeremiah has essayed the female lead part. Writer Shrinivas Kaviinayam has penned the script. Director Kamalakannan has helmed the film. So, how has the hyperlink action drama Vattam come out? Will it help establish a bankable lead hero image for actor Sibiraj and rejuvenate actress Andrea Jeremiah’s career? To know that let us get into the movie review. 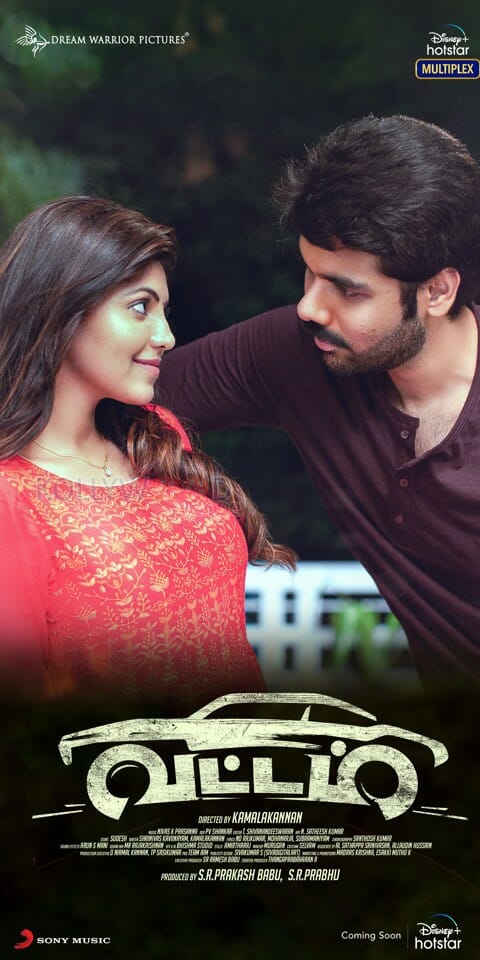 The film revolves around Mano (Sibiraj), a reckless young man who finds it difficult to cope with his break up with his ex-girlfriend Kokilavani (Athulya Ravi). So, what do heroes of Tamil cinema do to overcome a break up? They get drunk, and ruin others life. Mano is not any different. On the day of Kokilavani’s marriage he goes to get drunk and pass out. But he gets kicked out of the bar. Arbitrarily, he comes up with a plan to abduct a person. Gautham (Vamsi Krishna), a wealthy businessman falls as a target for his impulse. In unexpectedly turn of events, when he goes to kidnap Gautham he changes his mind and abducts his wife Parvathi (Andrea Jeremiah). And why did he do that? We have no clue.

If you are starting to think it is weird, brace yourself, it is only going to be weirder. What was supposed to be a kidnapping affair, becomes a fraternizing event. Both Mano and Parvathi begin to talk about life, about love, oops…. sorry true love, woman empowerment, chauvinism, and whatnot. Meanwhile, on a parallel plot we have a group of friends who are concocting a plan to kidnap the child of their boss as a payback for sacking them. Why has Mano kidnapped Parvathi, will he send her back safe to her husband, and what happens to the group of friends thirsty for revenge, is what makes the rest of the flick.

Director Kamalakannan’s Vattam screams for the need of a proper writer despite having one. Intentionally or unintentionally Vattam did have the scope to be a good conversational drama about life. Director Kamalakannan does bring forth important aspects of life and initiates a conversation through his lead characters. But the problem is, they lack depth, and are merely there to impress the audience for a moment rather than to create any meaningful discussion. That is where all good things about Vattam ends. To begin with the critique piece, director Kamalakannan opens Vattam in the most insipid way. A young man wanting to get drunk on the day of his ex’s marriage. Rightway, it draws a sigh out of us. He follows the jaded opening with hastily introduced characters exhibiting weird human behaviors to get the attention of the audience. But he just ends up achieving the contrary.

Then, in the pretext of element of surprise, he places an absurd event to shock the audience. We have the kidnap scene. Once his lead characters are put on the stage as kidnappers and captive, he sort of spins the Stockholm syndrome to initiate a conversation between them to get them to deliver what he seems to believe as the progressive commentary on life. He does so in an inorganic way. It is as if a half-baked lecturer pulling a topic and spewing whatever he sees fit, and moves on to the next without bothering himself about how it reached his audience. The lead characters talk about complex matters in a great simplistic manner. By the time Vattam ends, we realize it is not Parvathi who is hostage to Mano. But it is we, the audience, to them.

It is refreshing to see actor Sibiraj go out of his comfort zone and try something different. But sadly, the actor has not got the job done convincingly. However, he just about pulls off his part. Actress Andrea Jeremiah yet again showcases what good a performer she can be. Actress Athulya Ravi has nothing much to offer to move the proceedings. Nonetheless, she does complete justice to her role. Actor Vamsi Krishna for a change has picked a role that is contrasting from what he has been doing film after film. Unfortunately, his character does not offer him much room to perform. Actor Bala Saravanan lives up to the purpose for why he was brought on board. Actress Renuka is operational. Actress Chaitra Reddy is adequate. Actor Shyam Prasad is functional. The rest of the cast has delivered what was asked of them.

On the technical front, music director Harsha Nivas K Prasanna’s tracks do not stay in our memory. But he makes up for it with his background score that blends well in accord to the emotions in scenes. Cinematographer Mathesh Manickam has done a decent job covering the drama. He has positioned his cameras at the right angles to capture raw emotions, and has adeptly deployed drones to depict the picturesque spots of Coimbatore. Editor Ruben L A has brought forth his fine editing prowess to enhance the work of his colleague.

On the whole, Vattam would have been a much better drama if it had been crisp and deep, a dearth of pointless chunk portions that simply end up dragging the run time.

Vattam is available for streaming on Disney + Hotstar OTT platform.