It is an irrefutable interesting period in Tamil cinema when a whole web drama gets made with its focus on human emotions. Paper Rocket is the series to do the least expected feat. The series is a story about a group of people from different walks of life seeking to heal their past and present trauma in life through therapy. Actor Kalidas Jayaram who was last seen in Tamil in a supporting role in the action thriller Vikram is back on screens as the lead hero in the romedy web series Paper Rocket. Actress Tanya Ravichandran has essayed the female lead role. Director Kiruthiga Udhayanidhi has helmed the web series. So, how has the series come out? Will it help propel actors Kalidas Jayaram and Tanya Ravichandran as bankable lead artists of Tamil cinema, and be a successful outing for film maker Kiruthiga Udhayanidhi? To know that let us get into the series review. 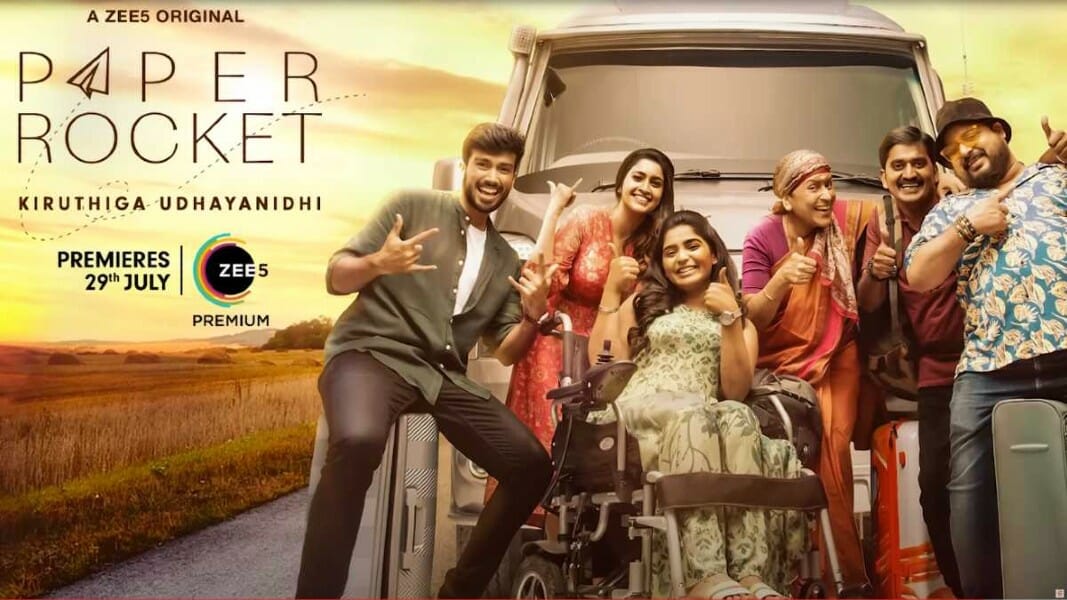 The series revolves around Jeeva (Kalidas Jayaram), a dynamic young man who is very successful in his profession. He has a doting father who lives far away from him in Kanyakumari. He has a habit of ringing up his son to check on him. In one instance, he calls Jeeva when he is in the middle of a business meeting. Jeeva is forced to skip the call. Later he is informed of his father’s demise. He gets shattered. He goes back to his hometown where he meets his friend Francis (Kaali Venkat), whose dad Devarajan (Chinni Jayanth), is his father’s close friend. Devarajan is bedbound, and is deeply distressed by the death of his friend. Jeeva takes him to a care center to get him treated. Suddenly he is surrounded by guilt of not picking up his father’s last call, and not spending enough time with him. He is absorbed in these thoughts and could not direct his focus on anything else.

On the suggestion of Dr. Sheila (Poornima Bhagyaraj), he decides to attend group therapy. There he meets five individuals Elakya (Tanya Ravichandran), Tiger (Karunakaran), Valliamma (Renuka), Charu (Gouri G Kishan), and Unni (Nirmal Palazhi) who are battling to overcome their own trauma, grief, and loss. Learning about everyone’s unlived desires, Jeeva comes up with an idea to take them on a road trip across Tamil Nadu to fulfill their wishes. Their travel begins, and so is their healing process. How does the road trip impact them, and will they be able to find their inner peace and move on in life, is what makes the rest of the flick.

It is hard to get a drama in Tamil cinema that for its entire run time has its focus on exploring human emotions like trauma, grief, stress, and the process of human healing. Director Kiruthiga Udhayanidhi treats us to the rarity in Tamil cinema with her web series Paper Rocket. The series has a lot of positive façades to it. For starters, the backstory of almost everyone in the group is shaped in a relatable way. Not any dramatic events just to intensify the pain and suffering. So, we do not get worn-out when getting to know the characters. When a drama talks about depression and trauma in life, a serious mood is the immediate choice. But Paper Rocket takes a different route. It is serious, with its share of fun moments. One added advantage in watching Paper Rocket is that we get to enjoy the scenic locations from Kanyakumari, Meghamalai, Tirunelveli, and Karaikudi.

On the downside, Paper Rocket is a light-hearted drama that talks about surface level depression and trauma. And is reluctant to get beyond that point. The backstory and characterization of Tiger is not sufficient to hide the fact that it is merely added to the group just for the comical purpose. Also, the drama does not take much time to present the trauma events. It puts them out bluntly for the audience. So that it can get on with the journey part.

Actor Kalidas Jayaram fits well in his part. His role does not demand much from him, and he pulls off his part effortlessly. Actress Tanya Ravichandran is solid and does complete justice to her role. Actor Karunakaran is inconsistent in his job. Yet he manages to provide the much necessary comical relief. Actress Gouri G Kishan does not have much to offer to influence the plot. But still, the actress lives up to her role. Actress Renuka has done her part well. Actor Nirmal Palazhi is functional. Actor Kaali Venkat with an effective performance as usual. Veteran actors Chinni Jayanth, and Poornima Bhagyaraj for their part have chipped in, to serve their purpose for being on board. Actor Dheeraj is adequate. Actor G. M. Kumar is operational. The rest of the cast has delivered what was asked of them.

On the whole, director Kiruthiga Udhayanidhi’s Paper Rocket is a light hearted series that talks about a mix of human emotions and the importance of healing that make our time worthy despite its flaws.

Aishwarya Rajesh’s Driver Jamuna To Release On This Date?