Would you envisage a film being made in Tamil cinema with the plotline that involves a grandmother, mother, and daughter falling for the same guy? No . . . no not some adult content. In mainstream cinema. No way right. But guess what, it is already done. Director V. Priya’s web series Anantham has an episode that has threads on it. This is what freedom does to cinema. It encourages creators to try out things that are deemed as taboo and explore the emotions of people who are isolated from society due to it. Actor Sampath Raj with his brilliant performance holds the series together. So, how has the series come out? Will it be a successful venture for director V. Priya and her pool of wonderful artists? To know that let us get into the series review. 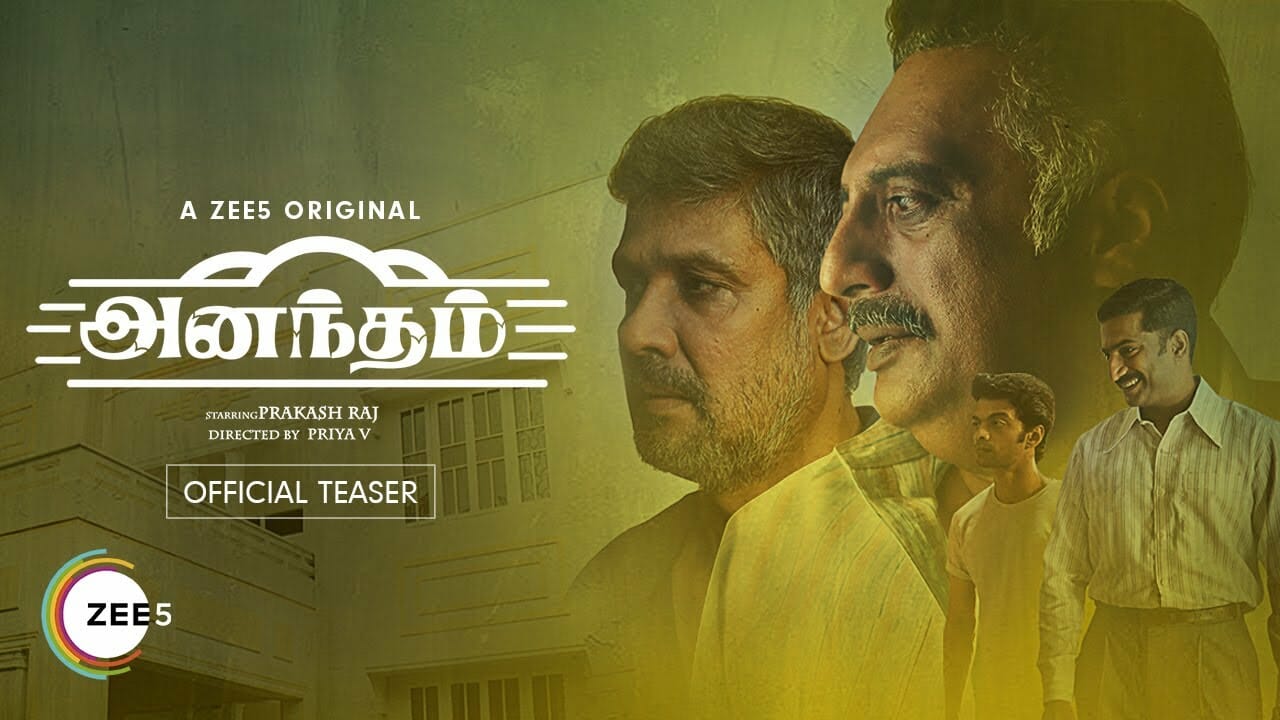 The series portrays the lives of various families who took up residence in a house in the past 50 years. In the opening episode titled Maragatham, we are introduced to Ananth (Sampath Raj), a popular writer who is working on his next book unenthusiastically visits his family home after a long time. In the house, reminiscence strikes and with it he begins to learn about the lives of people who lived there since his parents Venkatesan (Prakash Raj) and Maragatham (Indraja) left the place. In episode two, christened Seetha, Ananth comes to know of Sundar (Ananth Nag) and his visually impaired wife Seetha (Amrutha Srinivasan). With him we learn about the predicaments that she endures in the home. The story takes a melodramatic route. Just like Seetha even we feel struck within the walls seeking for redemption. In the third episode named Rekha, which carries forward the melodramatic tone, portrays the tale of a highly qualified man Sandeep Sekaran (Vivek Prasanna) and his easy-going wife Rekha (Mekha) struggling to gain stability in life.

The fourth episode is allotted for Ananth’s nostalgia. He reminisces about his teenage years, the first time he experienced love in life. With him we walk through his memories and emotions. On the fifth titled Krishnan Menon, we see the titular character move in as a paying guest into Anantham, when it is inhabited by a grandmother, mother, and daughter. The wittiness of him infuses happiness into the home. With it, he earns a sweet spot in the hearts of all three women. The one line might make it look scandalous but director V. Priya has handled the plot with so much sensitivity that we do not feel any level of discomfort watching what unfolds on screen. Moving to the sixth named Lalitha, the titular character and her son come to live in Anantham in which they share a dark memory in the past. Lalitha is surrounded with guilt and is in the process of processing her guilt.

In the seventh chapter titled Parvathy, Ananth comes across Parvathy (Mirna Menon), a psychotherapist who opens up about the abuse she was subjected to as a child and how she survived it. Director V. Priya seems to say enough is enough folks here have some twist in the tale moment in Parvathy. In the finale, we see Venkatesan returns to Anantham to spend the rest of his life in the home. He is at the final stage of his life and he wants to leave the world with no regrets or guilt. He wishes to mend his relationship with his estranged son. Will Venkatesan get what he wants, and with having to face his own traumatic memories from his childhood will Ananth be able to successfully turn the lives of people he came to know of into a book, is what makes the rest of the series.

A suitable tagline for the series could be, ‘A tale on human emotions.’ As that is the ride, we are on for. There is good fortune, love, loss, sorrow, fear, rage, and acceptance. The best thing about Anantham is story teller V. Priya draws us in to Anantham, and turns us neighbors to her characters and be a part of their journey in the villa. Not often, we see stories exploring complex issues like queer relationships, and unconventional love. Director V. Priya not only puts them to discussion but writes them with sensitivity, and compassion ensuring there is not even an iota of discomfort to the audience.

The character arc of most of the characters is very relatable and authentic. For instance, take Venkatesan who projects himself as a progressive man in the society but within the walls of the house he finds it difficult to exercise his projection. But he is not vilified. The effort is on, it takes decades of work to get there, and he becomes a more progressive character towards the end of his life. In a limited run time, the journey of the character is brilliantly captured. Every character, in some way, is flawed. Yet there is no condemnation. On the downside, the narrative does get a little bit slow on the melodramatic portions. We cannot help but look for the fast forward option to move the narrative away from those portions. Dearth of it, Anantham makes for a decent time killer.

The casting of the series is one of its biggest strengths. Actor Sampath Raj is natural and effortless in his performance. He has got under the skin of his character and has brought it to life. Veteran actor Prakash Raj is effective as usual. Actress Amrutha Srinivasan is exceptional. She sells Seetha convincingly. Actor John Vijay is functional. Actress Indraja does justice to her part. Actors Arjunan, Mathew Varghese, Sree Kavi, and Vivek Prasanna have all chipped in and done their part well. The rest of the cast has delivered an impressive performance.

On the technical front, music director A. S. Ram adds value to the film. His stellar background score rhythms so well with the mood of the series. Cinematographer Bagath has done a fine job in capturing the emotions of the characters. Editor Sathish Suriya has emphasized the work of his colleague by his sharp trims.

On the whole, story teller V. Priya’s Anantham might not be everyone’s cup of tea but it sure is for people who look for diverse cinematic experiences.

Anantham is available for streaming on ZEE5 OTT platform.