There was a time in Tamil cinema not long ago when horror genre was enjoying a good share of business. But Tamil cinema film makers have to come to terms with the fact that the horror run has come to the end of the road. Jada which should have been billed under the sports drama genre seems to have had the horror success effect in it and has been billed as horror sports film. Actor Kathir who made headlines with his subtle yet poignant performance in Pariyerum Perumal have delivered yet another good performance but that is not good enough to save the sports entertainer. 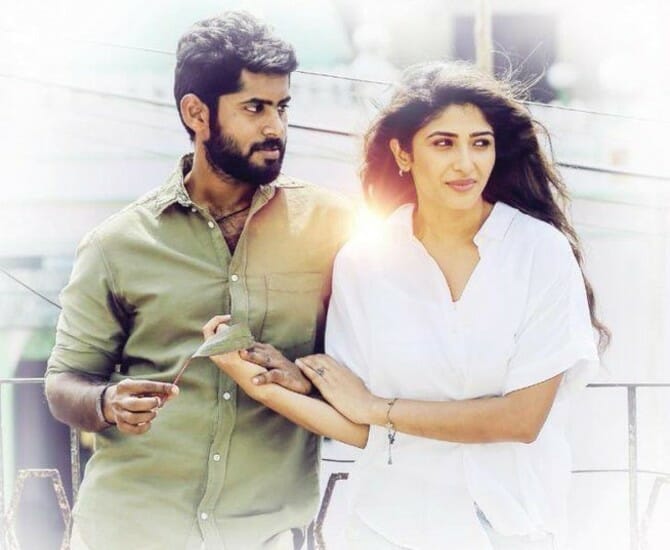 Jada (Kathir) is a talented and fearless footballer from Pulliyanthope who took up the sport after inspired by Sethu (Kishore), a local football star. Unfortunately, Sethu losses his life while playing in the ruthless and violent 7’s format of the game. Death of Sethu leaves a deep cut in Jada. Now as a grown man, he is a local football star who is seen as a potential talent. His coach advices him to focus and work hard so that he could widen his possibility of getting selected to play in the Santhosh Trophy which in turn could also secure him a job in the sports quota. But Jada is very much interested to play in the 7’s format because he wants to avenge the death of his childhood mentor and hero Sethu.

At this time two rival groups who are known for organizing the violent local 7’s tournaments come up with a plan to organize a tournament after years of ban. When this news comes to the attention of Jada he desires to participate in the tournament to honor the death of Sethu by winning the trophy. But when he expresses his interest to his coach he puts on a red card for his interest fearing the aggressive nature of the format and that it might cause any injury to Jada which would keep him away from playing in the Santhosh Trophy. But Jada convinces his coach that he would keep himself safe and at the same time bag the trophy. The team sets out to a village to participate in the tournament but it is not a smooth journey which makes them realize the game must also be played outside the turf to win it. So will the team overcome all the hazards on their way to win the trophy, is what makes the crux of the movie.

The film gives you an outline about the evolution of the tough and hard natured sport. It is also the moment you set your mind to experience an intense and gripping sports tale. But what follows is merely a disappointment. The problem with Jada is, it wants to be a multiple genre film but ends up being dishonest to all the genres. In the first half the film maker tries to narrate about the nature of the sport and how it is practiced in the locality but in the second half of the flick it suddenly turns in to a horror drama. Though the director has tried to blend it with the plot, it deprives the audience of the typical nail biting experience that a sports drama offers. There is a forced romantic track in to the main plot which impacts the script in no way. It merely seems like an addition to fit in the romance portion of formulaic film making.

Actor Kathir has delivered yet another good performance but that is not enough to save a film which is weighed down too heavily by poor writing. Actress Roshini Prakash has delivered a middling performance even in a role that is not very demanding. Comedian Yogi Babu serves his purpose infrequently as most of his one liners fall flat while only few entertains. Actor Kishore makes his presence felt even in a very limited screen time. The rest of the cast have delivered an ordinary performance while some of them are hard to buy for being a footballer.

On the technical front, cinematographer Richard M Nathan has managed to capture the raw nature of the game in the best possible way. Even in the absence of unnecessary vfx his frames speaks loud. Musician Sam C. S’s background score adds strength to the film with ‘Apdi Pakaadhadi’ song being the only decent number.

Director Kumaran’s core intention to deliver a sports entertainer was right on track and the amount of work that he has put for it is very evident. But when he derails from the sports track to the spirit elements it fails to keep the audience hooked to the film. There are also many forced commercial elements thrust in to the script which further dilutes the sport drama. The casting for few football players does not help either.

On the whole, if director Kumaran had stayed honest to the sports genre, Jada could have been a much better sports drama.