Anthology is the new trend in Tamil cinema! Of late story tellers of Tamil cinema seem to be much interested in cooking up short stories rather than baking a full length feature film and end up having to clear some kind of financial tussle to bring the flick to the theaters. When anthologies first began to hit the screens in Tamil cinema, the excitement was very high as it brought together at least three different film makers. But gradually as the short films did not stand out to be as refreshing as they were expected to be, the reception they enjoyed initially has also deteriorated. And in time like this in comes Kutty Story helmed by film makers Gautham Vasudev Menon, Venkat Prabhu, Nalan Kumarasamy, and A. L. Vijay. Will this anthology drama change the fading enthusiasm for Anthology films? To know let us get in to the movie review. 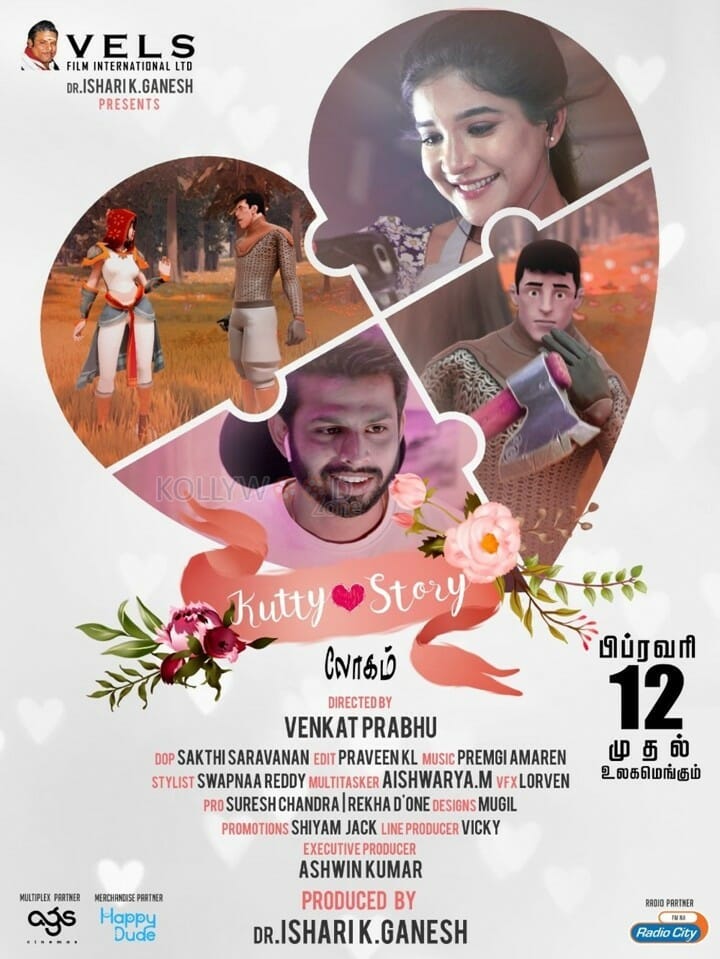 Aadalum Paadalum directed by film maker Nalan Kumarasamy talks about the extramarital affair of a middle class husband (Vijay Sethupathi). It lays light on how a mid life crisis for men easily stands as a reason for their search of excitement outside marriage and how women are perceived by the society, to live inside a framework irrespective of what is done to them. It also takes dig at the mentality of men who expect their affair to be forgiven or overlooked but has different standards when it comes the other way around. Director Nalan has picked a sensitive topic that is not often chosen by film makers of Tamil cinema and has gracefully handled it without compromising on what he wanted to convey. Now that is an art, and Nalan seems to be becoming a master in it. Actor Vijay Sethupathi as usual steals the show with his performance but it is hard to buy him mouthing English dialogues. Actress Aditi Balan is gorgeous and cake walks her role.

Edhirpara Mutham helmed by director Gautham Vasudev Menon explores about the platonic relationship between a man and woman. The story revolves around Mrinalini (Amala Paul) and Adhi (Vinoth Kishan) who have been friends for a very long time. In these years of friendship they have had an intimate moment. But have not given much thought to being lovers and chose to continue their friendship. After many years, on an occasion, they realize they had love for each other. However, the situation is out of their hand and can they do anything about it, is what makes the climax of the short drama. Like all of director Gautham’s films there is grace, style, and love in the air even in Edhirpara Mutham. As usual the flick is technically stunning as well. Simply Gautham and his presenting prowess! He has also starred in the film but despite his elegance he stands unconvincing as an actor. Actress Amala Paul is charming both in the younger version and as an adult. Actor Vinoth Kishan has done justice to his role as younger version of Adhi.

Logam made by story teller Venkat Prabhu follows the life of a gamer Adam (Varun). Adam meets his Eve in a game called Logam. He has not met her in real life but has fallen for her while playing the game. Just when Adam desires to know more about Eve her character dies in the game. How far will Adam go for his love? Will he go in search of his Eve in real life, is what makes the rest of Logam. Unlike Venkat Prabhu’s films Logam is a different attempt. Most of the story is narrated through animation. Though the film initially garners our attention by its creativity, it does not manage to keep us hooked as the film proceeds. But as usual Venkat Prabhu ends the short film with his touch. Actor Varun is adequate and has lent his voice to the animation character.

Avanum Naanum by director A. L. Vijay deals with what a woman has to go through when she has to endure an unplanned pregnancy at the wrong time of life. Preethi (Megha Akash) and Vikram (Amitash Pradhan) are college students in love with each other. They have a careless moment and result of which Preethi gets pregnant. Naturally she is stunned by the development. She conveys the news to her boyfriend after which he goes off zone and inaccessible. Preethi still has not recovered from the shock and struggles to make a decision. Her friend attempts to walk her down the path of abortion. Will Preethi agree to abort her child or chose otherwise is what rest of the flick is about. Director A. L. Vijay has taken up an emotional issue but it seems like he has made efforts to run the drama without clarity. Actress Megha Akash has delivered a decent performance as a college girl in an intricate situation of life. Actors Ayra and Amitash Pradhan are adequate for their role.

On the whole, director Nalan Kumarasamy tops the chart of Kutty story followed by Gautham Vasudev Menon, Venkat Prabhu, and A. L. Vijay with their not so interesting dramas.