The audience have come out of the almost bored out comedy horror genre but film makers of Tamil cinema have not. It is hard to figure out the reason behind the fascination of Tamil directors for the horror films. It definitely cannot be the success factor as predominant of Tamil horror films have ended up very badly commercially. So what is this fascination about and is there an end to it? Guess, it is one of those questions that life does not provide answer to. After starring in a string of web series actress Sunaina is back with the feature film as a lead character. Actor Yogi Babu is back on screens with – what must be his 10th or 15th horror film – Trip. Has the actor at least by this time around succeeded in delivering a solid horror comedy drama? To know let us get in to the review. 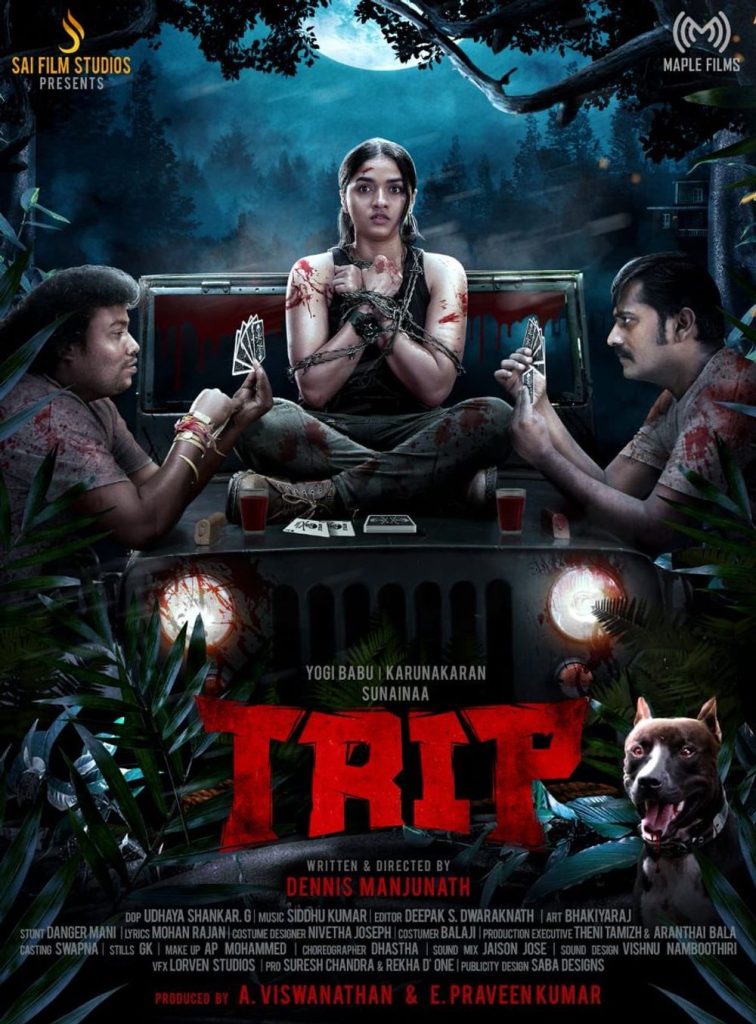 Liddi (Sunaina), Vikram (Praveen Kumar), Jeni (Nancy Jennifer) and their friends go on a leisure trip to a dense forest. The gang is focused only on the thrill the trip would facilitate to them. But they have no clue about the mysterious elements revolving around the forest. People who set foot in the forest go missing and out of zone completely. On the other hand, there is also two other workmen Azhagan (Yogi Babu), a carpenter and Amudhan (Karunakaran), a painter who have come to the forest to do repair works in the house of an ex forest officer located in a deserted place. When the group of friends first comes across Azhagan and Amudhan, they mistake them for psycho killers. On one instance Liddi happens to meet Azhagan and Amudhan alone. Initially she is scared of them only to realize later that they are innocent workers.

Meanwhile in the camp friends of Liddi go in search of her and get killed. Vikram and Jeni finally find Liddi and inform her that Azhagan and Amudhan are serial killers who have killed their friends who went in search of her. Liddi help her friends understand their innocence and clear the misunderstanding. In the meantime, Azhagan and Amudhan come across an unconscious girl Samrin (Athulya Chandra) on their way. Assuming her to be Liddi’s friend they bring her to the camp. To their surprise they learn that the girl is not Liddi’s friend. Samrin regains conscious. To everyone’s shock she gives them a warning that everyone in the camp is going to die. What is going on in the forest? Who is Samrin? Has she got anything to do with the missing persons, and murders that occur in the forest or is it Azhagan and Amudhan, is what makes the rest of the film.

A group of friends going on a trip to a secluded place or house is the much preferred plot line to make a horror drama or a comedy horror movie throughout the world. Director Dennis Manjunath on his debut film has chosen to go with the tried and tested successful formula. But has he done it efficiently? The plain and straightforward answer to that question is a simple no. There are good films and bad films. Then there are films that do not fit in both the categories as they leave us completely clue less. Trip is exactly one such film. The film maker wants it to be a mixture of many things there is a romance track, friendship, horror, thriller, comedy, on, and on. But he ends up baking a flick that is clue less about what it wants to accomplish.

The story teller has also tried to embed a much less explored topic of Tamil cinema in Trip. He brings in a cannibalistic angle in to the plot. He manages to make it reasonable by not exaggerating or depicting it in a dramatic way. With slightly better writing and clarity in what the film wants to pull off, Trip could have been a decent entertainer. But film maker Dennis Manjunath has squandered a potential opportunity. The only positive side of the movie is its comedy track. But even there the one-liners are not worthy enough to invoke laugh. After a point it gets tedious and by then you would have probably lost interest to care.

Actress Sunaina looks gorgeous and have played her part well in the comical portions. The actress is not convincing in the portions where she is subjected to terror and must exhibit fear. Comedians Yogi Babu and Karunakaran have done their best to serve their purpose but struggles without content. Actors Motta Rajendran, Praveen Kumar, Kalloori Vinoth, Athulya Chandra, and Nancy Jennifer do not have much to offer while the rest of the cast has delivered a middling performance.

On the technical front, music director Siddhu Kumar is inconsistence with his background score and his tracks are not much inspiring either. Cinematographer Udhayashankar’s frames have covered the film ensuring the spookiness. Editor Deepak S. Dwaraknat has enhanced the work of his colleague with his sharp cuts.

On the whole, director Dennis Manjunath does not take us on an engaging Trip sending Trip in to the infinite collection of boring horror comedies of Tamil cinema.