The film might look like a solid suspense thriller on paper but it really does not create that impact on visual medium. A solid thriller basks on how the suspense is built till the very end, and the way it is broke in the end. Like most suspense thrillers, Thittam Irandu gets one part of it ticked.

Unfortunately, films are not releasing in theaters anymore. Seems like even the bankrollers do not prefer to go for a theatrical release any longer. It appears the trend will continue, at least for a while. Thittam Irandu is the latest film to have an OTT release. It is back-to-back women centric films for actress Aishwarya Rajesh. The actress, who stole the show with her wonderful performance in her previous film Ka Pae Ranasingam is back with her latest thriller flick Thittam Irandu. Director Vignesh Karthick made his debut in Tamil cinema with titling his debut venture with a peculiarly funny name, ‘Yenda Thalaiyila Yenna Vekkala. His sophomore film could have been funny, if it had been named, ‘Yenda Mudi Vettala.’ Sort of, could have, made it in to a ‘Yenda franchise films.’ Unfortunately, he has not considered that idea. This time around he has decided to get serious and has picked up a social issue and has made a film out of it. 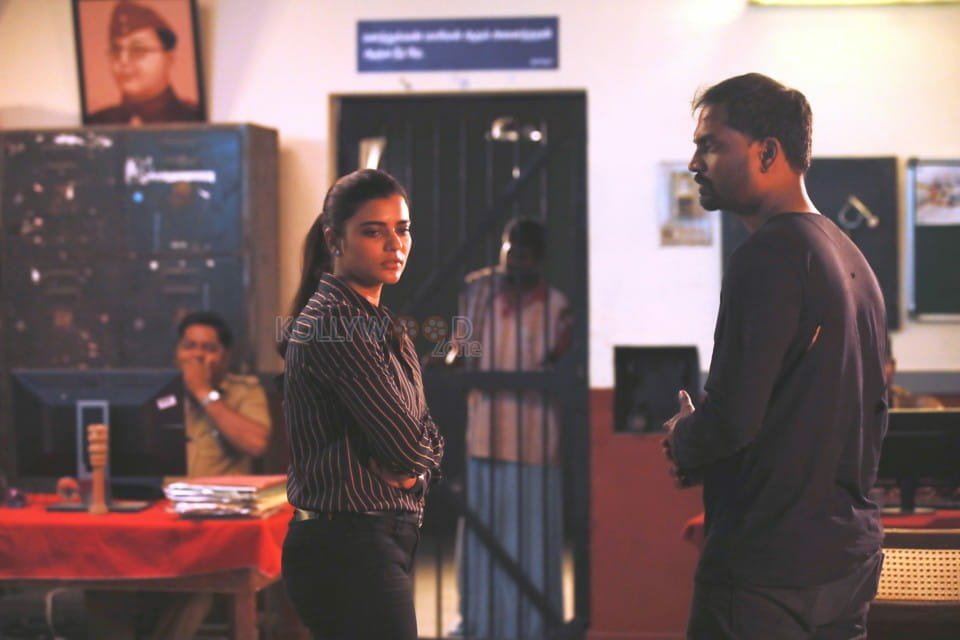 The film follows the investigation of Athira (Aishwarya Rajesh), a young upright rugged cop. On a bus journey, Athira come across an aspiring actor, Arjun (Subash Selvam). They become friends and eventually fall for each other. After a point they choose to take their relationship to next level, and decide to get married. One day, Athira is notified that her childhood bestie Deepa Surya (Ananya Ramprasad) is missing. The missing case is assigned to her. She begins her investigation. She speaks to Deepa Surya’s doctor husband, Kishore (Gokul Anand). After her initial investigation, she hypotheses that Deepa has gone missing from her home. Further investigation leads her to a burnt car with a skeleton in it. The skeleton is sent for autopsy. The autopsy report prove that the skeleton belonged to Deepa. The department attempts to close the case by citing this as a bizarre accident. But Athira suspects foul play.

She continues to investigate the case. While inspecting the burnt car, she finds a set of fingerprints. The fingerprint directs them to Barani (Pavel Navageethan), the ex-boyfriend of Deepa. Since he is already a suspect in a murder case, the suspicion heightens. He is brough under custody for investigation. He admits that both the women are his ex-girlfriends, and that they have exploited him and left him for someone else. So, he planned and killed the other woman. But when he went to kill Deepa, he stumbled up on a stranger in her house and ran away from the house. Barani’s confession again takes them to a dead end.

Meanwhile, Arjun gets a little upset over Athira’s excessive engrossment in the case. And that she does not take enough interest in their matrimonial preparations. Further investigation propels Athira to question the legitimacy of the autopsy report. So, she commissions for a re-autopsy. The report leaves her baffled, as the doctor states that the skeleton does not belong to Deepa. Her suspicion turns towards Kishore. She investigates him again and this time Kishore narrates a different story. He tells Athira that Deepa was forced to take his hand in marriage. And when she said to him that she was in love with someone else, he let her go. To avoid the problems that would ascend, if the parents come to know of this, they staged an accident. He shows her a video proof for Deepa’s existence but refuse to arrange for a personal meeting.

Athira shows the video to Barani to check if the strange man he saw in Deepa’s house was her boyfriend. To her shock, Barani says no. Her suspicion grows. Who is this strange man, is Kishore lying to her, what really happened to Deepa, is she dead or alive, is what makes the rest of the movie.

The film might look like a solid suspense thriller on paper but it really does not create that impact on visual medium. A solid thriller basks on how the suspense is built till the very end, and the way it is broke in the end. Like most suspense thrillers, Thittam Irandu gets one part of it ticked. The problem with making a thriller is that, it is not enough even if you successfully manage to hold the audience attention till the end. It could still end up being a bad film, if the end is not satisfying enough. You have to break the egg without cracking the yolk or else you cannot make a proper half-boil. Thittam Irandu breaks the yolk and hence we could not enjoy a proper half-boil.

Film maker Vignesh Karthick seems to be a bit lagging in scene building as the love potions look completely artificial. As an audience we could not connect with the emotions of the characters when they claim to be madly in love. Story teller Vignesh Karthick has his heart at the right place, but it is just that he could not convince the audience convincingly on the message he intended to deliver.

Actress Aishwarya Rajesh has delivered a decent performance. But not a performance up to her standards. Actor Subash Selvam is adequate for the role. Actor Pavel Navageethan makes his presence felt. The rest of the cast has delivered what was asked of them.

On the technical front, music director Sathish Raghunathan’s songs doesn’t last longer in our memory but he tries to make up for it with his background score. Cinematographer Gokul Benoy has covered the movie well. His shots are helpful in sustaining the suspense. Editor C. S. Prem Kumar has done justice to his colleague’s work with his scissors.

On the whole, Thittam Irandu had in it, every potential to be made in to a solid suspense thriller but story teller Vignesh Karthick just squandered it trying to walk down the cliché aisle of making a ‘message padam.’