Another horror thriller in Tamil cinema. Horror genre was an epidemic of Kollywood a few years back. Of late, just like how Covid pandemic has subsided, the interest in horror dramas has waned. Yet is not fully annihilated. Looks like we will have to live with it. Like we do with corona. GrandMa is about a little girl who gets disturbed after the demise of her grandmother, and the assistance she receives through a woman that brings comfort to her life. Actress Sonia Agarwal who was last seen in the horror drama Miya is back on screens with yet another horror flick titled GrandMa. Actress Vimala Raman has essayed a vital supporting part in the movie. Film maker Shijinlal SS has helmed the flick. So, how has the entertainer come out? Is it sold enough to bring actress Sonia Agarwal to winning ways and catapult her image as a bankable female lead in Tamil cinema? To know that let us get into the movie review. 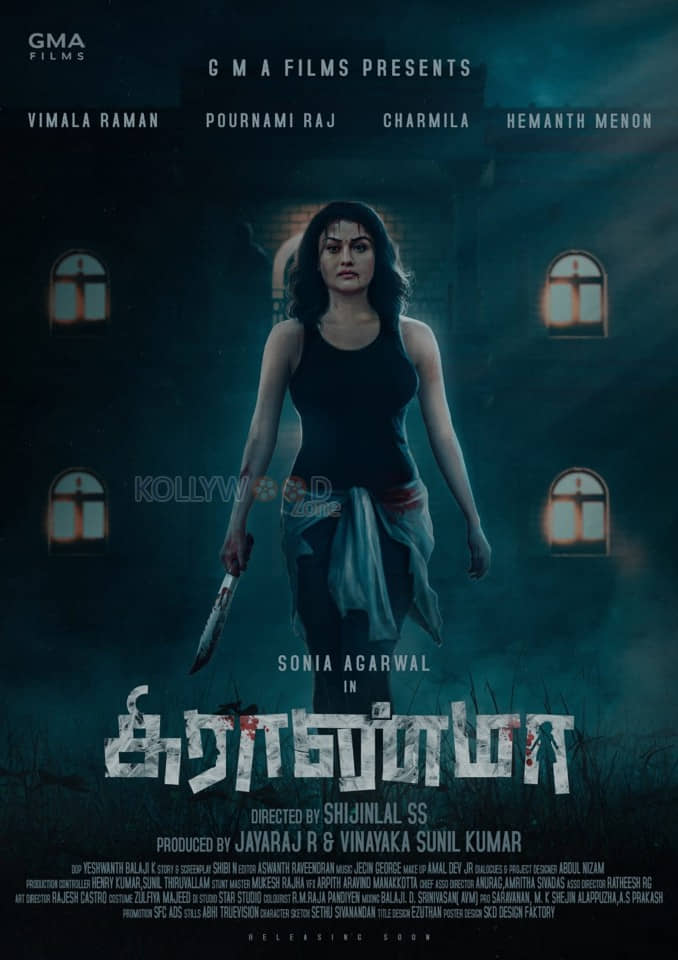 GrandMa follows the life of Priyanka (Vimala Raman), a successful attorney who resides with her daughter Nikki (Pournami) in a posh bungalow up the hill station. Priyanka has just lost her mother and is recuperating from the tragic incident. Nikki shared a strong equation with her grandmother, and her demise emotionally disturbs her. She becomes quiet and reclusive. She does not get along with anybody including her caregiver and home tutor. As Priyanka is fighting her own battle, she finds it difficult to look after her daughter. But she is worried about her. She comes to know of Trisha (Sonia Agarwal), a kind and thoughtful teacher who is dexterous in getting close to children. She appoints her to take care of Nikki.

Trisha begins her work but Nikki treats her just like the other aides. With persistence Trisha gradually works her way to gaining the trust of Nikki. After spending a few days in the bungalow, Trisha starts to sense the presence of paranormal elements in the house. Soon she learns about the presence of the ghost of Nikki’s grandmother. She gets terrified. Why has the grandmother come as a ghost, is she planning on hurting someone, and how Trisha handles the situation, is what makes the rest of the drama.

The interesting thing about GrandMa is, it takes the rarely used route to the one that is habitually traveled. Usually, when it is a ghost drama, the spirits are often written as a daunting revenge seeking element that refuses to rest in peace without destroying the people who have done injustice to them. But filmmaker Shijinlal SS writes his ghost as a companion and not as an evil doer. GrandMa starts off promisingly setting up the stage by deploying a mix of suspense and jump scares. The jump scars are framed well to give us the chilling experience. That is all there is to say positively of Grand Ma. As the film unravels it is a colosseum of disaster. There is a sense of sloppiness and lethargicness in all aspects of the craft. The flow of the film goes conveniently without a least bit of coherence. Excluding a few minutes of initial portions, the movie starts to lose steam right in the second half of the first half.

In the second half, clueless about how to drag the run time, director Shijinlal SS brings in characters in the form of Priyanka’s foes and moves the flick pointlessly. What started off as a ghost drama about the bond between a granddaughter and her grandmother becomes a business affair before it aligns back to track. If director Shijinlal SS had chosen to focus on his core plot giving us details about the relationship, GrandMa would have been a poignant drama. But he does not, and the entertainer becomes testing material. To top it all, there is no such thing as a character arc to any characters. They are shallow and plain. Even the bond between the child and her grandmother is not established well. For a film that is entirely founded on the bond, it is so feeble that it does not get us to share the emotions that the two characters go through. These untidy works make GrandMa lose our attention even before it gets to the end of the first half.

Actress Sonia Agarwal disappoints with a middling performance. She over plays her part, and is sometimes superficial. Actress Vimala Raman serves the purpose for the reason she was brought on board. Actor Hemanth Menon is adequate. Actress Pournami is functional. Actress Charmila struggles even in a part that demands very little from her. The rest of the cast has delivered a below par performance.

On the technical front, music director Jecin George’s tracks are not inspiring. Except for the few jump-scare portions he even disappoints with his dreary background score. Cinematographer Yeshwanth Balaji K’s visuals are middling and have a repulsive effect on us. Editor Aswanth Raveendran’s trim job is the final nail in the awful technical coffin.

On the whole, despite his good intentions, awful writing and substandard film making propels storyteller Shijinlal SS’s GrandMa into the list of films that are best to be missed.