The transformation of J from innocent Ammu to becoming a formidable force in the game played mostly by men would have made for an inspiring tale for generations to come. However, film maker A. L. Vijay squanders the opportunity to be the first one to have made a solid flick based on J’s life. By the time Thalaivii ends it is hard to grasp what was Vijay’s purpose in making this drama.

When director A. L. Vijay announced that he is going to make a biopic of revered leader and former Chief Minister of Tamil Nadu J. Jayalalithaa, the expectations hit sky high. People grew curious to know behind the scenes of her life as she kept her personal life very private. Her life was as mysterious as the mysteries of the world. Even her death was subject of obscurities which lead to the forming of an exclusive commission to enquire her demise. People began to wonder if Thalaivii would answer all the unanswered questions, hence the high expectation. After a long gap, finally we have a theatrical release in Thalaivii. But is Thalaivii solid enough to gravitate audience to the theaters? To know that let us get in to the movie review. 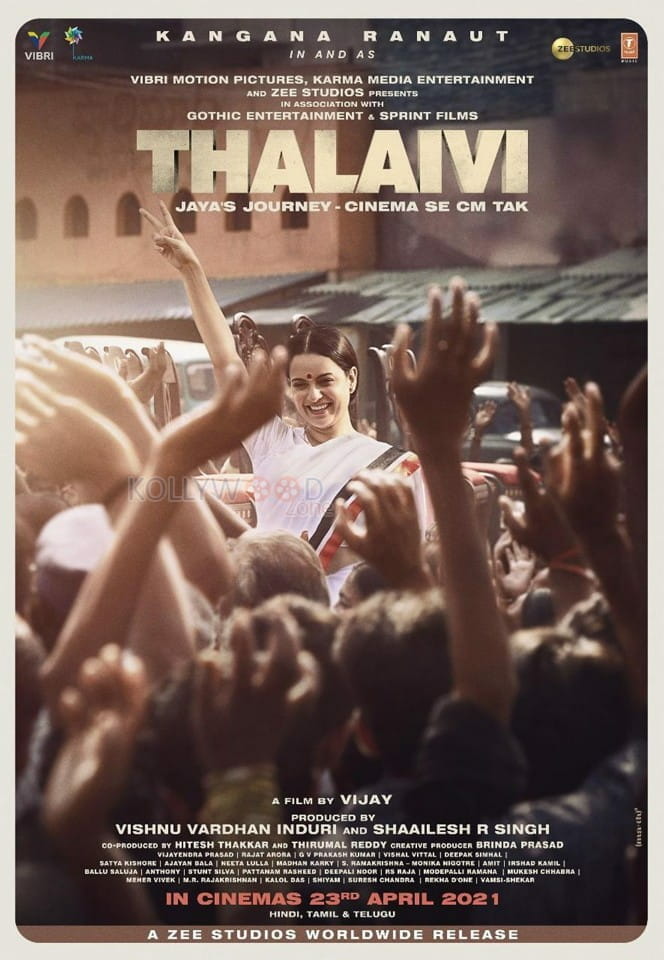 Trying to pack the life story of a successful person within a couple of hours is a challenging task. Like any other person they would have had their highs and lows in life. Moments that turned their life around, moments that lead to controversies, their personal vulnerabilities. The biggest dilemma that a story teller would have, is when deciding what events in their life has to be shown and what part is better left unsaid. In our cinema saturated society, even for biographical sketch of a popular celebrity, a film maker has to go through this dilemma. When the biopic is about a powerful and revered politician that’s entirely a different ball game. One wrong depiction of the personality would gravitate a lot of trouble. Problem with making biopics is they are perceived as a person’s opinion about the respective individual on whom the film is made. Hence director A. L. Vijay seem like he had been put in a spot with a demarcated boundary while penning the script. This boundary reflects heavily in Thalaivii.

L. Vijay moves predominant portions of the first half covering J’s life in Tamil cinema industry and her alleged romantic relationship with her political mentor M. G. R. We get duet songs where Kangana Ranaut and Arvind Swami dance around trees. These portions are amusing. Arvind Swami scores well in emulating the trademark movements of M. G. R. Apart from this we do not have nothing going on in the first half. The second half portrays J’s venture in to politics – the ruthless arena where even men fear to navigate. We are shown the situation under which she was asked by M. G. R to assist him in politics, after his demise how she was treated by her own party men, later how she was stripped of her dignity in the state assembly and the way she vowed to step inside the assembly only as a chief minister in response to the injustice unleashed on her. Surprisingly, the film ends with her coming to power for the first time in 1991 as she pledged.

One is left hanging, wondering as to what constitutes this a biopic? Thalaivii has nothing in stores that could give us something that we did not know already about the late leader. And it presents merely the half political journey of J.

What do a person expect out of a biopic? To see the other side of the individual or know more about the mysterious events in the person’s life that never came to light. Thalaivii has neither. Perhaps, director A. L. Vijay preferred not to take any unwanted risk trying to portray things that could upset people. That is totally fine. But if that is the case why attempt to make the biopic in the first place?

The transformation of J from innocent Ammu to becoming a formidable force in the game played mostly by men would have made for an inspiring tale for generations to come. However, film maker A. L. Vijay squanders the opportunity to be the first one to have made a solid flick based on J’s life. By the time Thalaivii ends it is hard to grasp what was Vijay’s purpose in making this drama.

Actress Kangana Ranaut has undergone physical transformation for the role, and in that context, deserves credit for the efforts she has put in. But she is clearly a miscast for the role. She tries too hard to imitate J but could not come anywhere near her elegance. And her poor mouth sync to dialogues does not help either. Actor Arvind Swami has worked hard to replicate the venerated leader M. G. Ramachandran on screen. And has succeeded in his attempt to a considerable extent. Mostly it amazes but sometimes it does look odd. Veteran actor Nassar holds our attention with his performance as usual. Actor Samuthirakani has delivered an impressive performance. The rest of the cast has done what was asked of them.

On the technical front, music director G. V. Prakash Kumar’s music does not stand in our memory for too long. Cinematographer Vishal Vittal has done a decent job covering the drama. Editors Anthony and Ballu Saluja have supported their colleague’s work well with their scissors.

On the whole, director A. L. Vijay’s ambitious attempt to depict the not-depictable life story of late revered leader and former Chief Minister of Tamil Nadu J. Jayalalithaa suffers without a clear purpose.