Tamil cinema is at a phase where every film makers, in particular debutant film makers are so fervent to deliver socially relevant message oriented entertainers. Debutant director Ashok Thiagarajan is not an exception to that burning desire as he has also placed his flick Maayanadhi in the message oriented drama category. In Maayanadhi, which is inspired by real life events, director Ashok Thiagarajan intends to layout his version of how getting in to a relationship at the time of school life could set forth a chain of disastrous consequences. He does this by walking us through a relationship between a doting father and his daughter. 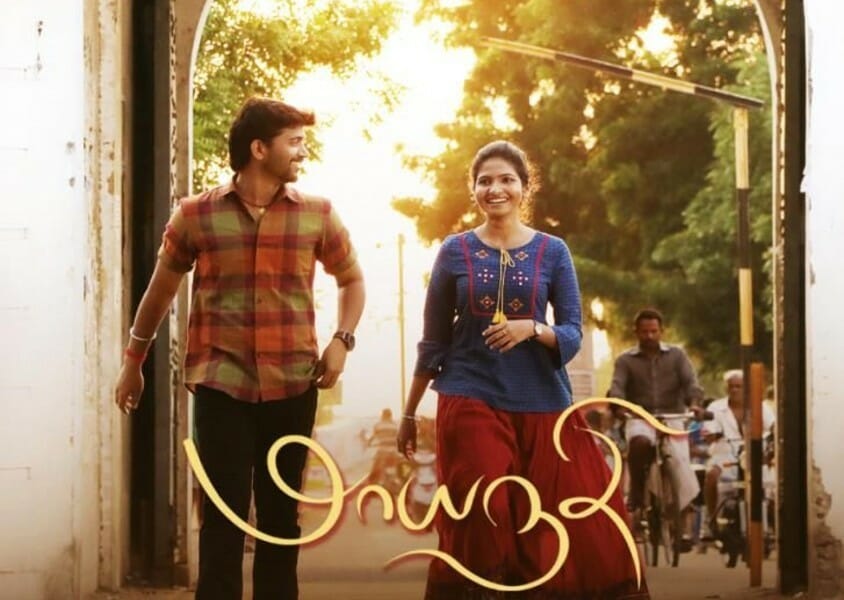 The movie is set at the backdrop of Mayiladuthurai where Anbarasan (Aadukalam Naren), a widower and very affectionate father lives with his daughter Kausalya (Venba). He gives her complete freedom to do whatever she wants to do and does not refrain from talking about the taboos prevalent in the society. He also trusts her over anybody. Kausalya is a promising student and has an aspiration to be a doctor. She stands up to the expectations of her father and makes him proud for the trust that he entrusts on her. But everything changes when she falls for Senthil (Abhi Saravanan), an auto rickshaw driver who drops and picks her up from school every day. Kausalya and Senthil begin to go out together to many places. On one instant, Anbarasan’s brother spots them together and he warns Anbarasan about their affair. But Anbarasan who totally trusts his daughter turns a deaf ear to his brother.

Meanwhile, Senthil desires to takes his relationship with Kausalya to next level. Clearly knowing that he would not be able to convince Kausalya’s father to get her married to him, he begins to emotional blackmail Kausalya. He marries Kausalya secretly by terrorizing her that he would commit suicide if she does not agree to marry him. When Anbarasan comes to know of his daughter’s marriage he gets shattered. Unable to deal with the way his daughter broke his trust, he makes a drastic decision which puts Kausalya’s life in jeopardy. What will happen of Kausalya and her marriage with Senthil, will she opt to carry on with her education or give up her dream of becoming a doctor and continue living with Senthil, is what makes the rest of the movie.

There is nothing wrong in wanting to craft a socially relevant message oriented film but it is the unnaturally shoved message portions in to the core plot that makes the audience disconnected. Also, for a socially relevant message oriented film to work, it needs to stay to the ground reality and the story should be navigated through well crafted characters with good characterization. Maayanadhi lags both as a result the chemistry between its lead characters seems to be staged. Director Ashok Thiagarajan brings in few characters in to his narration which promises to play a significant role in the proceedings but disappears half way through without leaving any impact. On the positive side the portions of a father and daughter, the affection shared between them, the way the father treats his daughter and gives her the freedom to be aware of the social conditions and break past them are well written.

Actor Aadukalam Naren has delivered a neat performance and is a fitting choice to depict a doting father. He also handles the character change of a doting father to a completely broke and devastated father quite smoothly. Actress Venba is adequate in the daughter’s role though she has underperformed in the romantic portions despite very ordinary intimate portions. Actor Abhi Saravanan lags with his expressions which prevents the audience to connect with the character. Comedian Appukutty has failed to live up to the purpose for which he was brought on board except for couple of portions. The rest of the cast has delivered what was asked of them.

On the technical front, musician Raja Bhavatharani, daughter of musical maestro Ilayaraj has lived up to the expectations with her soulful background score which is the only soothing factor about the entertainer. Cinematographer Srinivas Devamsam’s frames are very middling and along with moderate editing from editor Gopi Krishna makes the technical side of the film totally week.

Director Ashok Thiagarajan seems to have had a very clear state of mind of having to deliver a message film. His intention is evident throughout the flick as some or the other character keeps on lecturing someone pointlessly about relationships or moral or in general about life matters. While half way through Maayanadhi one could not help but find some sort of similarities between it and Kadhal. Even the plots of both the entertainers are somewhat close, as Kadhal portrayed a school going girl falling in love with a local mechanic and both had to face the consequences. But unlike Kadhal, Maayanadhi is filled with too many preachy scenes and its mediocre film making reduces the film to a sub standard level.

On the whole, with little work on screenplay and better technical unit Maayanadhi might have been a better entertainer.