For over a decade now, actor Santhanam has been resilient on his mission to become one of Tamil cinema’s leading star heroes. Unfortunately, he has had limited results thus far. Now he is looking for ways to make his adventure work. Gulu Gulu by film maker Rathna Kumar is one such attempt. The film is about a vagabond who accepts the request of a group of friends to help find a friend of theirs who is kidnaped. Actor Santhanam who was last seen in the comedy drama Sabhaapathy is back on screens with his road action-comedy movie Gulu Gulu. Actress Athulya Chandra has essayed a key part in the movie. So, how has the dark comedy drama Gulu Gulu come out? Is it comical enough to reinforce actor Santhanam’s fading image as a bankable lead hero of Tamil cinema? To know that let us get into the movie review. 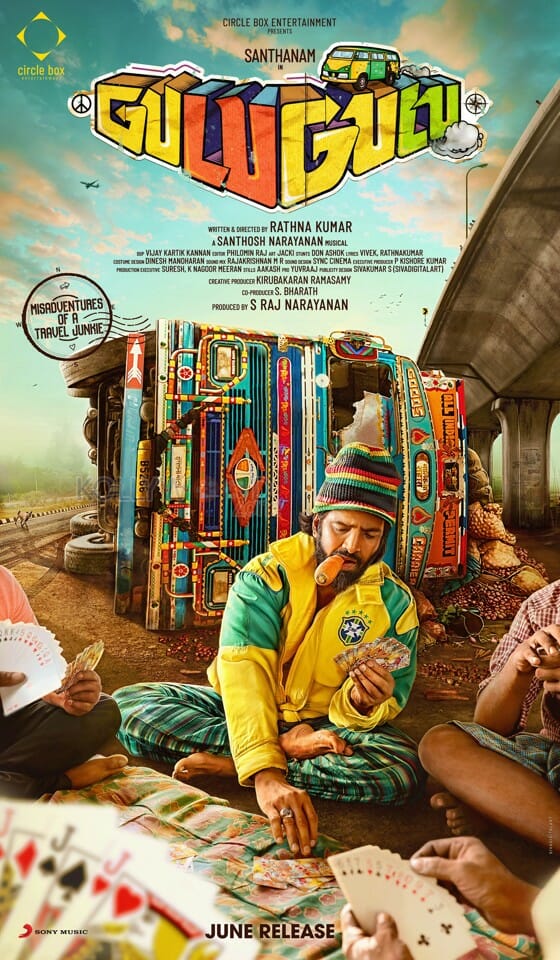 The film revolves around Google aka Gulu Gulu (Santhanam), a smart aleck drifter who sets a series of things in motion that creates havoc in the lives of a group of people. Gulu Gulu opens with Matilda (Athulya Chandra), returning to Chennai from France to attend her father’s funeral. But her return does not evoke a good reaction among her stepbrothers. She arrives at the funeral and takes one final look at her father. She sees that a pit is dug and ready to bury her father. Mistaking that Matilda meddled in the funeral proceedings, her stepbrother David (Pradeep Rawat) gets mad at her. And he decides to kidnap her.

He hands the job to an abductor (George Maryan), with a team of professional kidnappers. Meanwhile, a youngster who intends to know whether his always a busy father cares about him. To find out he concocts a plan with his friends to stage a kidnapping. Yep, no brownie points for guessing it right. The plan flops and leads to chaotic repercussions. They seek the assistance of Google (the character here), to search and solve their problem. Will Google help find a solution for the problem, or will he lead to further trouble before he could get to the solution, is what makes the rest of the flick.

What makes a dark comedy work? A serious situation as the nub, building funny scenarios around it, and the impeccable timing and expressions from artists. To give credit where it is due, director Rathna Kumar nearly manages to deploy all those factors in Gulu Gulu. But his effort is limited to the initial portions where the kidnapping takes precedence. The weird circumstances finely exploited by the artists involved offer us some amusement. But sadly, film maker Rathna Kumar has little focus on the plot, and has spent more time on creating silly situations. Even he does half the job in it, and is lethargic in penning the one-liners which are mostly banal. Why exhaust time in creating such situations when you are not prepared to write quips that land?

Gulu Gulu sort of looks like a collection of many unconnected short spoof videos pulled from a range of meme materials. This is the issue with not having the proceedings rooted in a gripping tale. As if there are not enough flaws already, director Rathna Kumar tries to infuse the mandatory surface level social message that only has an annoying effect on us. At least the first half of the drama did get us to laugh here and there. But as it enters the second half, it gets as clueless as a dog that entered the cricket field in the middle of a match. At the end, we the audience, just like the dog, are anxious to find our way out of the theater.

Actor Santhanam picks up from where he left in Sabhaapathy. Despite actor Santhanam’s best effort to give something new for the audience, the sameness in his performance, from expressions to his mannerism, in every film make us feel that as if we are in the sequels of the never ending ‘The Santhanam franchise.’ Actress Athulya Chandra does not have space for much. But she lives up to what her part demands. Actor Pradeep Rawat does complete justice to his role. Actor George Maryan has brought his own persona to his part making an averagely written part enjoyable. Comedians Sai Deena, Lollu Sabha Maaran, and Lollu Sabha Seshu, serve the purpose for why they were brought on board. Actress Namita Krishnamurthy is effective. Actor Harish Kumar is adequate. Actor Kavi Sundaram is operational. Actors Maurish Dass, Yuvaraj, and Bipin are functional. The rest of the cast has delivered what was asked of them.

On the technical front, music director Santhosh Narayanan is clearly not at his best. His songs are middling but entertaining anyway. He adds strength to the flick with his fine background score that aids in enhancing the comical portions. Cinematographer Vijay Karthik Kannan has done a decent job covering the drama. Editor Philomin Raj has put his scissors at the right spot to chop off the shortcomings in his colleague’s work.

On the whole, actor Santhanam’s Gulu Gulu is a bus without destination on a road that leads to the same roundabout multiple times in the couple of hours of its entire journey.