Remaking Malayalam films is the new trend in Tamil cinema. Payanigal Gavanikkavum is the latest official remake of hit Malayalam drama Vikruthi written by Ajeesh P. Thomas helmed by Emcy Joseph. The story of the flick is inspired by a true event. It tells the tale of how a misinterpreted viral social media post turns the life of an innocent ordinary man topsy turvy. Actor Vidharth who was last seen in the thriller drama Carbon is back on screens with his comedy film Payanigal Gavanikkavum. Actress Lakshmi Priyaa Chandramouli has played the female lead. Director S. P. Sakthivel Perumalsamy has helmed the movie. So, how has the flick come out? Is it solid enough to clock views and revive actor Vidharth’s image as a bankable lead hero in the industry? To know that let us get into the movie review. 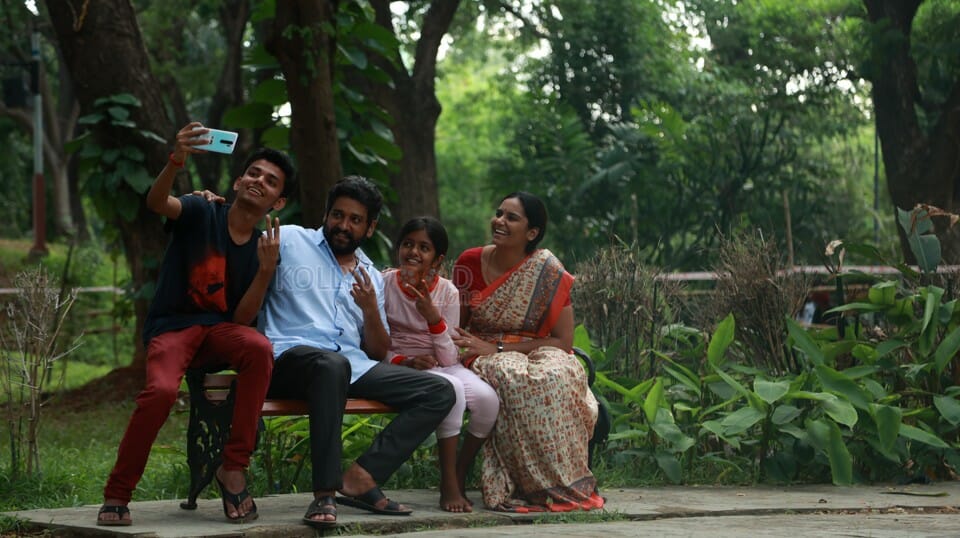 The movie follows the life of Ezhilan (Vidharth), a staff in a school for differently abled kids. and his wife Tamil Selvi (Lakshmi Priyaa Chandramouli). They are a couple with speech and hearing impairments. When Payanigal Gavanikkavum opens we witness Ezhilan and Tamil Selvi bargaining with a seller to reduce the price of a cutter. In the end they succeed, without even uttering a single word. They live a content life despite their disabilities with their daughter in a rented house. Then we are introduced to another character, a Dubai return Antony (Karunakaran), a social media freak and addict who cannot keep away from sharing almost everything in his life on the platform. He literally spends most of his time on social media trying to show the world he is happy. He is the kind of guy who has an irrepressible urge to go live on the platform even when he meets his mother instead of being with her in the moment.

In one instance, Ezhilan’s daughter gets admitted to a hospital. He stays in the hospital for two days in order to take care of her. After two days, an exhausted Ezhilan takes the Metro to go back home. Naturally, being tired he falls asleep on the journey. Antony, who happens to be his co-passenger, looks at him sleeping, and finds it humorous. Being a social media fanatic, he assumes that the man asleep would make for a good social media post. So, he clicks a picture of him without his permission and posts it on his social media handle tagging him as a drunkard. The post goes viral. When people begin to recognize Ezhilan in the public as a Metro drunkard, life becomes difficult for him and his family. His son gets mocked at school and he begins to look down on Ezhilan.

When the truth comes out how Antony tries to handle the consequences of his mistake, and will the tarnished image of Ezhilan be restored, is what makes the rest of the flick.

At a time when we people give too much significance to social media, and how simple and effortless it has become to spread fake news and ruin people’s name on the platform in comes director S. P. Sakthivel Perumalsamy Payanigal Gavanikkavum has the issue as its nucleus. In a way it tries to do what the Hollywood film Don’t Look Up tried to do. Enlighten people. But not as effectively as it did. With Payanigal Gavanikkavum story teller S. P. Sakthivel Perumalsamy makes an effort to raise imperative questions to social media users that take the online world too seriously than their real world. As a metaphor to mute the loudness that these platforms thrive on, and to drive home the message that to be happy that one does not have to be an online bragger, he structures his characters to be deaf and dumb.

The film maker starts the flick with giving us a sweet glimpse into the lives of Ezhilan and Tamil Selvi who are ordinary people leading a simple yet content life. Be it the scene where the couple bargain with the seller, or the portion where they catch up through a video call communicating in a language that they have pioneered, sets the right tone for the proceedings, and draws us into its world. Even with a vital message, Payanigal Gavanikkavum does not preach or deliver lectures. That approach is what keeps us invested in it for a longer period. But S. P. Sakthivel Perumalsamy finds it hard to infuse comedy into the serious subject fearing that his drama might come across as an insensitive creation. In that dilemma he constantly deploys melodrama to give us the seriousness of the subject. The problem is, the melodramatic sequences do not feel authentic but rather forced. From there it does not take long for the film to eventually run into a barren zone.

Actor Vidharth sells Ezhilan convincingly. He has done his part well. Actress Lakshmi Priyaa Chandramouli in yet another meaty role. She does complete justice to her role. Comedian Karunakaran has lived up to his part. Actress Masoom Shankar is functional. Veteran actor Kavithalaya Krishnan is effective as usual. Actor Prem Kumar is adequate. Actor RJ Sarithiran keeps up his reputation by being customarily irksome. The rest of the cast has delivered what was asked of them.

On the technical front, music director Shamnath Nag’s music is not inspiring. But his background score does add little value to the film. Cinematographer S. Pandi Kumar has covered the drama in the best ways possible. Editor R. S. Sathish Kumar has complemented the work of his colleague with his scissor work.

On the whole, with slight fine tuning of the script, Vidharth’s Payanigal Gavanikkavum would have been a much better drama.