Director Srinivasa Rao has an interesting one line but the treatment and the execution, is where he lacks behind. Also, the plot line on which he bases Sabhaapathy demands a fine blend of emotion plus comedy and it cannot be worked out as a downright comedy drama. These are the fire arrows that pierce down Sabhaapathy to a larger extent.

Santhanam and his adamancy to play lead hero lingers. And it seems like it is in the never ever give up mode. Looks like he is never returning as a comedian any time soon. Ever since he turned hero, he has always been the know it all wise and dashing guy in every flick he featured. For the first time he has hit the experiment button, and has opted to play something different than that. The actor who was last seen in Dikkiloona earlier this year is back on screens with his latest fantasy film Sabhaapathy. And yes, with his go to Lollu Sabha team of colleagues along with the recent talk of the town cook with comali sensation Pugazh. So, how has his recent experimental flick come out? To know that let us get in to the movie review. 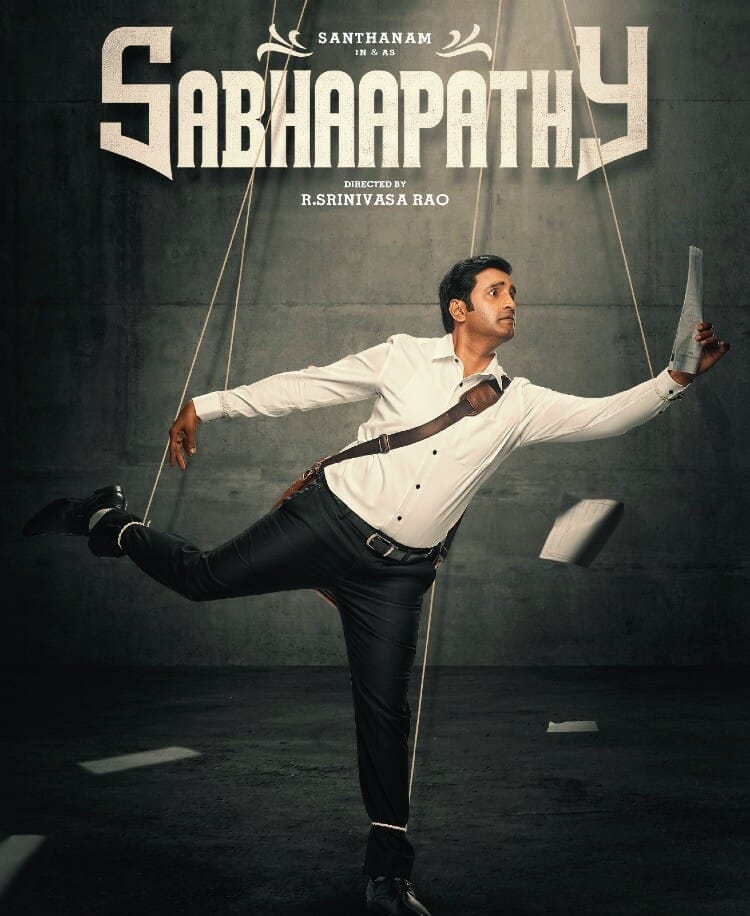 The story revolves around Sabhaapathy (Santhanam), a jobless young man. Unlike rest of his movies, where he would be proudly jobless by choice, here the stammering issue he has keeps him a step away from securing a job. His father Ganapathy (M. S. Bhaskar), a retired teacher is always at his throat for not being able to land in a job. He wants his son to take care of the family as he is retired. But Sabhaapathy is frustrated by his situation and spends most of his time hanging out with his friend Ramani (Pugazh). He is unemployed, comes around with his friend, yet he has his love track going right on track. Come on, how come a jobless Tamil hero be without a love affair? Is not that the only qualification in Tamil cinema for being in love? He is in love with Savithri (Preethi Verma), a girl in his neighborhood.

The pressure of having to take care of his family mounts on him and his stammering issue does not put him in good spot in the interviews he attends. At the peak of his desperation, fate decides to intervene. It puts a suitcase with over 20 crores of money on his path when he is in a drunk state. But what would our Sabhaapathy, oh innocent Sabhaapathy do? He takes it back to his home safely so he could return it to its owner later. The cash belongs to a corrupt local politician Lucky Raja (Sayaji Shinde). Will Sabhaapathy keep the cash to himself or return it, and if he does, how will the politician take it, and will Sabhaapathy get a job overcoming his stammering issue, is what makes the rest of the movie.

Director Srinivasa Rao has an interesting one line but the treatment and the execution, is where he lacks behind. Also, the plot line on which he bases Sabhaapathy demands a fine blend of emotion plus comedy and it cannot be worked out as a downright comedy drama. These are the fire arrows that pierce down Sabhaapathy to a larger extent. The first half of the flick suffers from randomness and moves cluelessly trying to sell annoying stuffs in the pretext of comedy. It seems like story teller Srinivasa Rao penned down whatever he thought was funny. The film gets to a point only just before the interval. And does it get any better after that? Nope. Again, all we get is a bunch of unfunny crassness.

Things like a son vomiting right on his father’s head, father making a son to strip, and kicking your girlfriend’s mother in the butt. Seriously? Do these things really look funny to the makers? Is this the best you can write humor? There has always been a controversy with actor Sabhaapathy’s perception of comedy. The issue being the absence of a boundary of what can be made fun of and what should not be. Sabapathy also has such bad taste scenes. And now it is starting to feel like these scenes are being deliberately placed so it can bring in some free attention. The sooner the actor pays attention to it, the better it is for his career. If he is supposed to have one.

Just a little bit of extra emotional shade from the characters he usually plays and actor Santhanam struggle to get set in to the role. The shortcomings in his performance are evident in the emotive scenes. It is only fair to say comedian Pugazh does not have a good start to life in the big screen. Veteran actor M. S. Bhaskar is effective as usual. His expressions and impeccable sense of timing are unparalleled. Actress Uma Padmanabhan replicates the roles she represents film after film. Actor Sayaji Shinde is under used in a poorly written character and so is Vamsi Krishna’s. Oh yeah, there is a female lead in the flick. Actress Preethi Verma seem clueless about what she is supposed to do. The rest of the cast has delivered what was asked of them.

On the technical front, music director Sam CS’s songs do not get our attention. Even his background scores are not good either. Cinematographer Baskar Arumugam’s frames are adequate for the movie. Editor Leo John Paul’s scissors should have been a lot sharper.

On the whole, Sabapathy is just another hint that as long as actor Santhanam takes to get his hero image right on track, we are going to have to live with his horrendous half-baked experimentations.