Of late creators of Tamil cinema seem to be very much obsessed with portraying their lead character with some sort of disorder. In this weekend’s other release Psycho, the hero is visually impaired, in case of V1 Murder Case it was nyctophobia, and it was anger management in Adithya Varma. Are we inclining in to a trend of lead heroes with disorder based characterization, right after coming out from the done to death horror and horror comedy genres, that only time will have to tell. Actor Vaibhav Reddy is back on screens after his last bland outing with romantic comedy Sixer. There are two main similarities with Sixer and Taana. First, in Sixer Vaibhav Reddy was depicted as an individual suffering from the nyctalopia disorder, even in Taana he suffers from a disorder known as puberphonia, a real bizarre disorder. Second, just like Sixer even Taana is made on the regular masala template of Tamil cinema and has nothing new to offer to the audience. 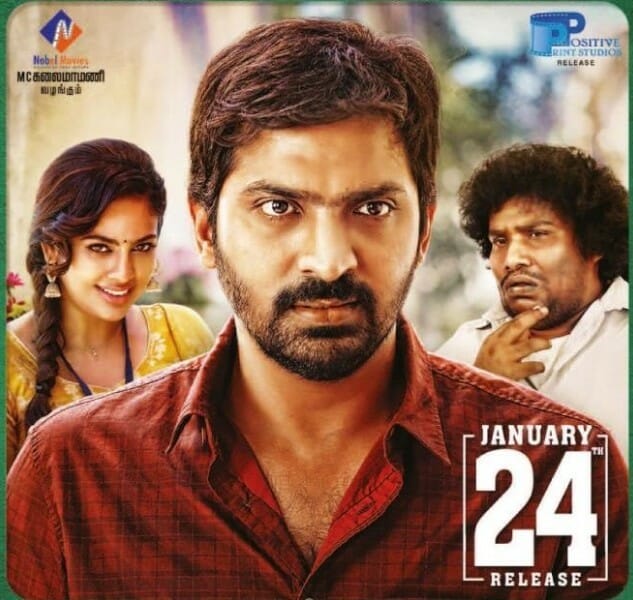 Taana opens with a boastful legacy introduction to the iconic figure of a village Taanakaran, who was the guardian of the entire village for over centuries. To honor and upkeep the glory of Taanakaran the members of the entire village organize a festival annually under one condition, at least one member from the Taanakaran’s family should be an incumbent police officer. This annual ritual has hit a roadblock and has not been conducted for the last 20 odd years because after the death of the last police officer in the family lineage his son Pazhani (Pandiyarajan) gets rejected at the police selection due to him being short. Now, he wants his son Sakthivel (Vaibhav Reddy) to make up for him and ensure that the family legacy carries on.

Pazhani gets the shock of his life when he finds that his son has a weird disorder known as puberphonia, a disorder which makes Sakthivel’s voice sound like the voice of a female when he experience anxiety attack or extreme joy. Scared of his disorder Sakthivel refrains from taking up the job of a police officer despite huge pressure from his family. But he decides to overcome his fear and take up the job when a woman gets killed by a criminal gang. He makes up his mind to don Khakhi to bring the corrupt gang to justice. But when he initiates his investigation on the case he figures out that an influential person is behind this gang. Will Sakthivel manage to bring the corrupt individual to justice despite his disorder is what makes the rest of the flick.

Play out a scenario where a male cop’s voice begins to suddenly sound like a female’s voice while interrogating a suspect or during calming down a raging crowd. It is funny indeed but to have an entire film based on this concept, it needs to have swift screenplay and building up of as many funny situations as possible to make complete use of the disorder. But director Yuvaraj Subramani has botched to capitalize on the very element that he had implanted in his script and diverts the flow by having unnecessary elements in the script. After a point he becomes clueless and drifts the flow of the flick to the investigative genre along with a contrived romantic track.

It is not fair to expect severe rationality behind every scene in a masala flick such as Taana but at the same time it is also not fair to totally leave the logics in air and move the screenplay as the director wants it to float. Taana does that exactly, the protagonist’s disorder gets cured all of a sudden, he goes after a criminal gang, in comes a horror angle, and then he gets a heroine to romance with. It is hard to figure out what Taana wants to be, a comical entertainer or a cop film or a romedy. We wish at least film maker Yuvaraj Subramani knew the answer to it.

Actor Vaibhav Reddy who has got that special ability after Mirchi Siva, to even make an ordinary joke enjoyable, battles hard to shoulder the film on his own but the lack of proper flow in the screenplay outdoes his efforts to sink Taana. Actress Nandita Swetha has no scope to perform as her character has neither depth nor any weightage to impact the story; if at all Taana had one. Some of comedian Yogi Babu’s one liners and his portions with actor Vaibhav are the relief factors to the audience that too only to an extent. The rest of the cast has delivered what was asked of them.

On the technical front, even the technical departments of the movie have letdown the entertainer badly as musician Vishal Chandrasekhar’s songs and the background scores are very average and cinematographer Shiva GRN’s camera work disappoints too.

On the whole, despite an interesting and bizarre disorder in the plot unnecessary plot diversions, lazy and very comfortable writing lets down Taana.