Director Santhosh P Jayakumar who has a notorious reputation for making adult comedies like Hara Hara Mahadevaki, Iruttu Araiyil Murattu Kuththu, and Irandam Kuththu has ditched the genre and has come to the family drama zone with Poikkal Kudhirai. The film is about the struggle of a physically challenged father who is suddenly in need of a mammoth amount of money to save the life of his daughter. Actor Prabhu Deva who was last seen in the children fantasy drama My Dear Bootham is back on screens with his mass action thriller film Poikkal Kudhirai. Actresses Varalaxmi Sarathkumar, and Raiza Wilson have essayed the female lead roles in the drama. So, how has the action thriller Poikkal Kudhirai come out? Will it be a successful project for actor Prabhu Deva, and aid in revitalizing director Santhosh P Jayakumar’s career in Kollywood? To know that let us get into the movie review. 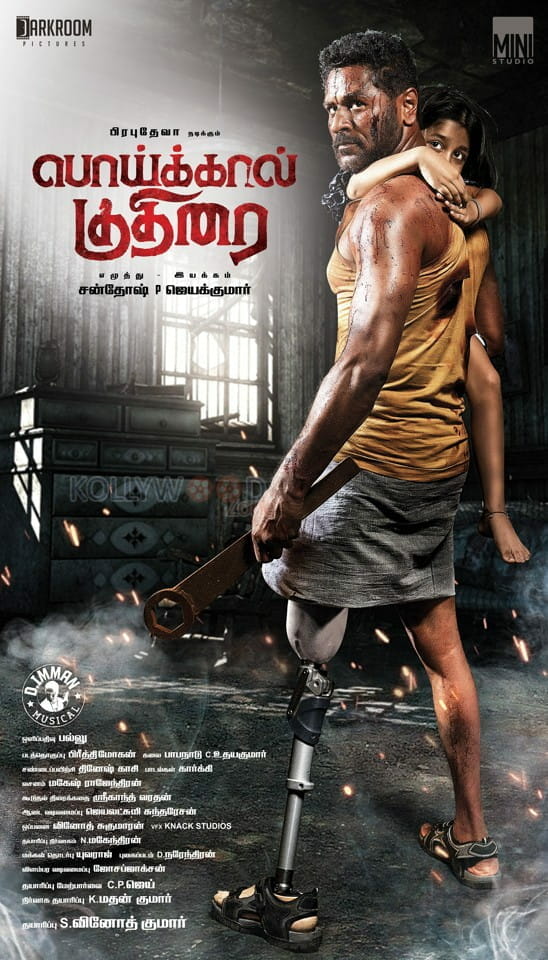 The film follows the life of Kathiravan (Prabhu Deva), a doting father whose world revolves around his beloved daughter Magizh (Baby Aazhiya). He is the kind of father, who would not even hesitate to pilfer water from his neighbors when his daughter desires to learn to swim. Poikkal Kudhirai opens with amputee Kathiravan getting thrashed by a few thugs. Even before we could get a proper reason, the scene cuts to an introduction song. When you have Prabhu Deva on board, how can there not be chic dance moves, even if the character has only one limb, right? So, we get the purposeless song where the actor obviously showcases his incredible moves. As the film unravels, we learn that Kathiravan has lost his wife and his leg in a road accident. He receives compensation from the government which he intends to use for his daughter’s schooling. But his daughter Magizh wants her father to get a prosthetic leg.

Everything seems to go well for the father daughter duo. Until Magizh blackouts during a dance performance. She is taken to the hospital. Kathiravan gets the shock of his life when the doctor who examined his daughter informs him that she has a lethal problem in her heart, and needs a surgery to stay alive which would cost him a hefty sum beyond his means. An emotional Kathiravan promises to return with the money. Clueless about what to do, he visits his criminal father (Prakash Raj) in jail to ask for money. He tells him he has got no money but plants a kidnapping idea in his son. Kathiravan initially hesitates. But having left with no other choice he along with his friend Madhan (Jagan) comes up with a plan to abduct the daughter of a wealthy couple Deva (John Kokken) and Rudra (Varalaxmi Sarathkumar). Will Kathiravan be able to get the money in time to save the life of his daughter, is what makes the rest of the flick.

Director Santhosh P Jayakumar tries to make a proper family drama in Poikkal Kudhirai. Unlike his previous films, this one has an actual plot, though not potent, there is characterization of sorts, at least to the lead characters, and an effort at film making. But is that enough to constitute a solid film? Absolutely not. But definitely a step in the right direction, and he has a long ground to cover before he could make a solid drama. Director Santhosh P Jayakumar wants his film to be a poignant tale that explores the bond between a father and his daughter. To achieve that he spends a substantial portion of the first half trying to establish the connection between them. Unfortunately, his writing is too generic that these scenes are not only dramatic but feels like they are merely used to coerce the audience into sympathizing with the characters.

Poikkal Kudhirai on the periphery looks like a mash up of actor Prabhu Deva’s Alli Thantha Vaanam and Alaudin. The relationship between the actor and a small girl from Alli Thantha Vaanam, and the actor trying to solve the financial situations of the people from his slum through loot from Alaudin. Here the ‘people’ are confined to his daughter. To do something to his part director Santhosh P Jayakumar adds a series of twists to keep the narrative going. In all the gloominess of the drama, it is actor Prabhu Deva that holds the film together. He has put in real effort, be it the action sequences, or as a performer.

Actor Prabhu Deva does a fine job as a physically challenged man. He is even solid in the emotional portions. Actress Varalaxmi Sarathkumar is not in a filler role but her character does not have much space for her to perform either. Nonetheless, the actress does complete justice to her role. Actress Raiza Wilson’s part has very little bearing on the proceedings, and the actress lives up to it. It is excruciating to watch a performer as actor Prakash Raj in a next to nothing role. Child artist Baby Aazhiya has done a fine job discounting a few moments here and there. Actor John Kokken is adequate. Actor Jagan serves his purpose for being on board. Actor Bharath Raj is operational. Actor Shaam makes his presence felt in a cameo appearance. The rest of the cast has delivered what was asked of them.

On the technical front, music director D Imman’s songs do not create an enjoyable experience. Even his background score does not add much value to the film. There is nothing special in cinematographer Balu’s frames. He has done a middling job in covering the drama. Editor Preethi Mohan’s editing dexterity is not sufficient to clip off the shortcomings in the work of her colleague.

On the whole, director Santhosh P Jayakumar’s Poikkal Kudhirai is ambitious in a delusional way and shoots itself in the leg.

First Look Of Nivin Pauly’s Yezhu Kadal Yezhu Malai With Ram Is Out!