Director V. Arun kanth who had previously helmed Goko Mako is back again with his second flick titled Indha Nilai Maarum. There are some films which are terribly made and are difficult to watch on screens but look good on paper or in terms of plot. Then there are flicks which are so badly made that you cannot put them under any category. Indha Nilai Maarum is one such entertainer which leaves you wondering how come this script transpired in to a full length movie. Not only that, it scarily propels us in to reassessing the cinema standards that we hold. In an industry that is so difficult to penetrate in to, to get an opportunity to display one’s talent, films like Indha Nilai Maarum totally destabilize the hopes of young capable and potential contenders who are on the race to infiltrate the impenetrable fort. 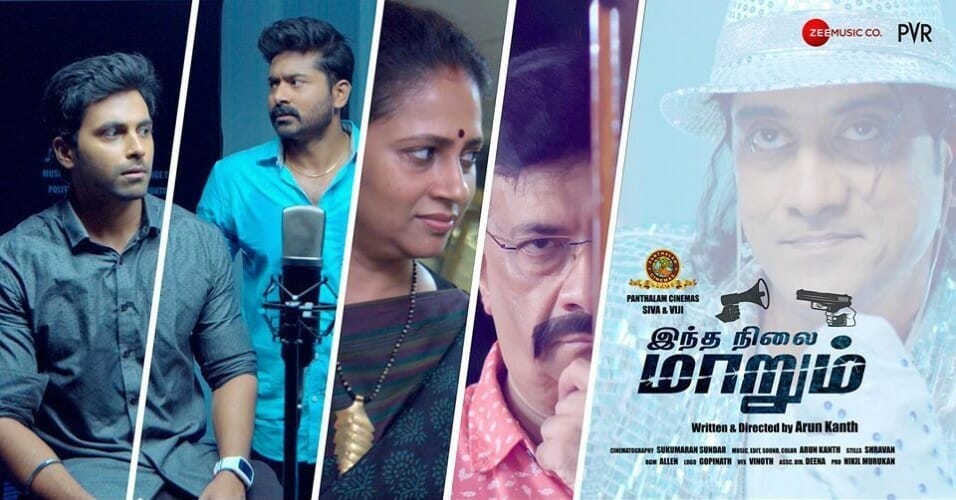 Indha Nilai Maarum follows the lives of two youngsters who are in the job that they hate but are forced to be in for their survival. After many thoughts they work up the courage to quit their jobs and go after their passion. But what is their passion, exactly? To do something interesting or innovative in their lives. So they give up their jobs and have a little ideas exchanging session among themselves before they decide to start an online radio station. Just after little planning, they set up an online radio station with ambitious desires to accomplish in life. A girl who is also passionate about being a radio jockey joins them in their journey. They name their radio station as police station. One has no idea as to what inspired the story teller to name a radio station with such a name. But when by this point you had already got in to the ‘who cares zone,’ you do not concern yourself much with what is happening on the screen.

Through the online radio station they aid in connecting people. Just when you force yourself to instill faith in the entertainer and being to prepare yourself to watch the struggles that the youngsters would face as new entrepreneurs, we are again in for a huge disappointment. Just like any other Tamil movies their growth happens in no time. With some absurd proceedings they become successful matchmakers in town and again more publicity among people. Their popularity puts them in the attention of a popular corporate magazine who does not like the growth of police station. In order to take them out of competition they file a law suit against police station. After this point the flick which started off as a story about two ambitious youngsters, incline in to a court room drama. Will the youngsters break the case filed by the corporate and continue to keep running their radio station is what makes the rest of the flick.

The plot of the flick is as weird as the treatment that the film has undergone. Indha Nilai Maarum is a flick made with no purpose but just because the unit managed to convince a producer in to bankrolling the project. Story teller V. Arun kanth has neglected all the necessary elements like rational behind scenes, proper flow in screenplay, appropriate characterization that must be deployed to build a flick and has just gone with the flow to shoot whatever he thought was good and interesting for him. The entertainer just seems like a film made by a group of people who assembled everyday on the sets and then decided what they are going to shoot on the respective day. Then have put together all the scenes that they shot in their schedule to turn it in to a full length movie.

Despite having already directed a film and having brought experienced artists on board, film maker V. Arun kanth has totally botched to deliver an entertaining drama. The problem just does not end with the scripting. It is amplified by the poor standards of film making as well. There has been a complete collapse in the technical department with most of the divisions handled by the film maker himself. Seems like the film maker was not in the mind set to allow anyone else to ruin his film and he does it by himself. It is high time that story tellers of Tamil cinema release that putting everything up on themselves pointing the budget constraints will only further degrade the standards of their flick and not help it, irrespective of the efforts that they put in.

Lead actors of the flick are as clueless as the story of the flick. It is disheartening to see even experienced artists struggling in the roles that do not have any scope to perform. The rest of the cast has also disappoints.

On the whole, Indha Nilai Maarum is a strong indicator that this situation (Indha Nilai) of Tamil cinema must change (Maaranum.)