Some films are made for entertainment purpose, some for artistic expression, and some to enlighten the masses. Then there are films that do not care about anything other than profit. The solo motivator is the money and it only sets the moral compass of those flicks. Irandam Kuththu is one such film. Just with the trailer of certain films you could come to the conclusion that you should turn off your intelligence mode when you are watching them. Irandam Kuththu is one such film. There are certain films that you should not miss out in your life. Irandam Kuththu is certainly not one such film. At least director Santhosh P Jayakumar’s first installment of the series Iruttu Arayil Murattu Kuththu, had space for us to breath from the crassness of the film. But Irandam Kuththu suffocates us with its nonstop flagrant crassness. Also, Irandam Kuththu seems to be crafted not only with mere profits in mind but also to get them without any efforts. Hence, story teller Santhosh P Jayakumar did not even care to work on establishing a new plot and just uses the same plot line of the first version. 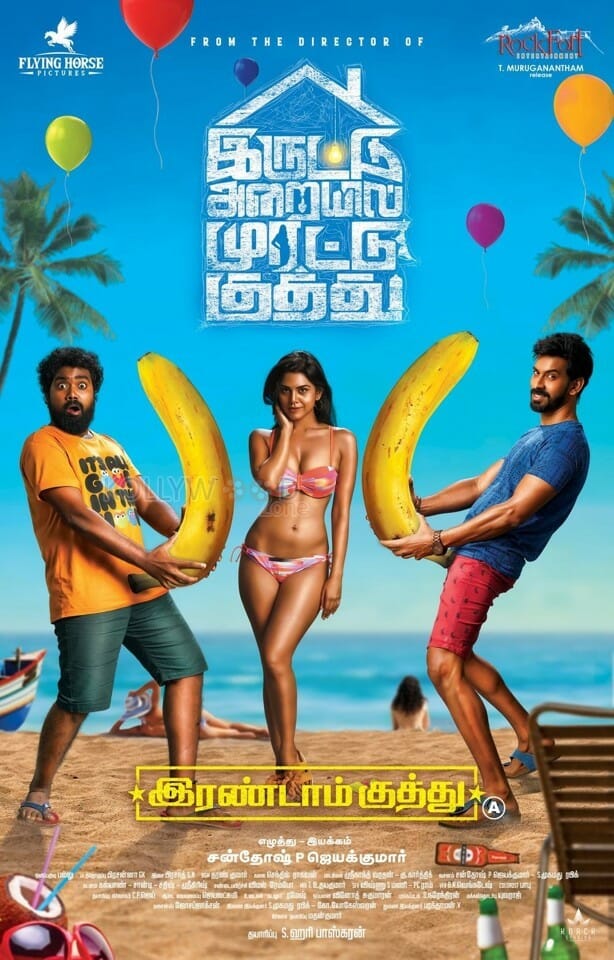 The film follows the doltish lives of two sex saturated youngsters (Santhosh P Jayakumar and Daniel Annie Pope) with no real ambitions in life. Yeah, most heroes of Tamil cinema are but here there is an additional problem to them. They see, talk, walk, and breathe only sex. And exhibit questionable behavior when they are with each other. For that reason people take them for gay. Tired of being seen as gay, they decide to find a female partner for themselves to prove their sexual orientation. In the worst way possible, they meet their life partners and get married to them. Now what? They leave to Pattaya to enjoy their honeymoon.

There seems to be a terrible misconception among our adult content makers – particularly with Santhosh P Jayakumar – about the adult comedy genre. Finely staged situations for double entendres to aptly fit in, unexpected scenarios, and timing are the key elements for an adult comedy film to work. But film maker Santhosh P Jayakumar has not even bothered an ounce to deploy these elements while crafting his film. In fact he has developed his own modus operandi for making an adult comedy: direct crass dialogues, objectify both men and women, skin show, and blatantly insult the LGBT community. Seems like, there is not a single ethical line that the story teller would hesitate to cross in order to draw the attention of people.

Even with all lines crossed and people’s sentiments disregarded, Irandam Kuththu fizzles out even before it starts to unfold. It is astonishing to discern how such an effortless writing transpired from a bound script in to a full length entertainer. This only sends us down the path to hoist the inevitable question; do not the people in the production department listen to scripts anymore? If they did Irandam Kuththu would not have ticked even a single box for being made in to a film. And we would have been saved from a couple of hours of twaddle.

The casting department is just another nail in the coffin with a wooden Santhosh P Jayakumar, and strident Daniel Annie Pope leading the way making it as difficult as possible to let us to finish watching the flick. Actresses Karishma Kaul and Akrithi Singh have been objectified to a whole different level. They seem to have been brought on board for a solo purpose, skin show. Both of them are incapable of enacting even simple emotions. With poorly written comedy scenes comedians Motta Rajendran, Chaams, and Singampuli suffer miserably trying their best to evoke laugh.

On the technical front, musicians S. N. Prasad & Dharan Kumar’s tunes are unimpressive and insipid. Cinematographer Ballu frames are middling while editor G. K. Prasanna tries to cover up the bad work with his patch works.

On the whole, with hardly anything for the viewers and barely a hand full of jokes for a full length movie, Irandam Kuththu easily enters the list of entertainers that are best to be missed than watched.