Debutant story teller Franklin Jacob has ventured in to Tamil cinema with a socially strong film. His intention is clear. To navigate in to the police department and take us along with him to places which we not even would have imagined existed. Each character we come across in the film is meticulously crafted so that the authenticity of the drama is not lost at any point.

Tamil cinema audience love it when their favorite actor plays cop. Usually, they are mass action entertainers – flamboyant and powerful cop breaking bones and sending henchmen flying. But here comes a cop drama in the name of Writer that taps on our shoulder and says let us walk the path of reality for a change. Debutant film maker Franklin Jacob intends to show the factual and gloomier picture in being a cop. To do so he brings on the right man on board. Who else to go for other than actor Samuthirakani when there is a message to be sent out loud? So, how has the cop drama come out? Is it solid enough to add another feather to actor Samuthirakani’s hat? To know that let us get in to the movie review. 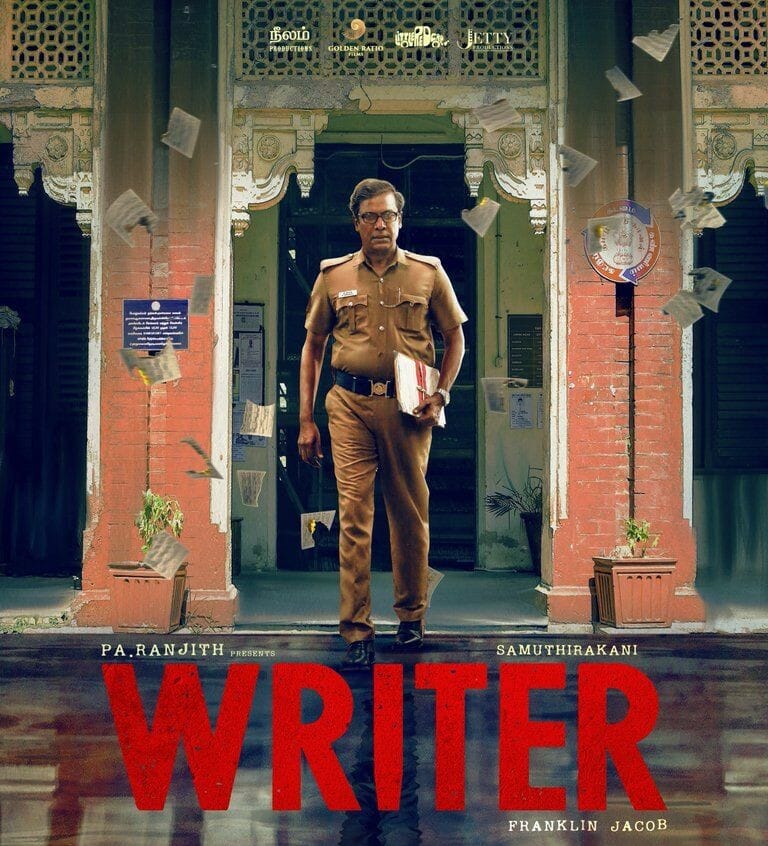 The film follows the life of Thangaraj (Samuthirakani), a writer in the police force for over 30 years. He is currently posted in a station in Trichy where he wades time awaiting his retirement. Thangaraj is not the loud rebel cop that we often come across in Tamil cinema. He is rather a pragmatic man who has customed to the system in order to survive. He has chosen to stay in the system and do the best he could. In fact, he has been fighting to set up a union for cops to ease the work pressure and unfair treatment that the cops have to put up with. This cause of him, pits him against his senior officials. At one point things go out of hand and Thangaraj is humiliated by a much younger officer than him and is transferred to Chennai.

In his place of transfer, he is received and treated as an outsider. He is bestowed with a task to monitor a Ph.D. student Deva Kumar (Hari Krishnan), who happens to be a Dalit Christian.  He has been falsely taken under custody as a suspect on a case. Thangaraj aids in framing up a case against Deva Kumar. But later realizes that the assistant commissioner (Kavin Jay Babu) has played a dirty game to set up Deva Kumar to save himself from an old case. Thangaraj decides to fight back. Will he be able to fight the system and save an innocent boy from being wrongly prosecuted, is what makes the rest of the flick.

It is hard to find films in Tamil cinema with a protagonist having his/her moral compass needle pointing to the average zone. It is a must that they should have higher degree of morality to be accepted as a protagonist in the first place. Director Franklin Jacob challenges that straight away on his directorial debut. He is adamant that his film stays in touch with reality and at no point it bounces off ground. With this in mind, he shapes his lead character Thangaraj. The character is not the stranger who move around in high moral grounds. He is just as flawed as we are. Film maker Franklin Jacob establishes this in the very first scene of Writer, when we see Thangaraj closing a petty case in an unjust manner just so he could bring down the crime rate on papers. Thangaraj comes about as a helpless character that is caught in a wicked system that tries to suck out every bit of humanity in him. Yet, he fights hard to take the path of compassion.

Debutant story teller Franklin Jacob has ventured in to Tamil cinema with a socially strong film. His intention is clear. To navigate in to the police department and take us along with him to places which we not even would have imagined existed. Each character we come across in the film is meticulously crafted so that the authenticity of the drama is not lost at any point. On the down side, director Franklin Jacob has a lot of issues that he wants his film to speak. But all go nowhere and just end up as titbits. There is only so much one could do in a run time of two and a half hours. It would have been better if he had saved some of the issues that he thrusts in for his next movie. In a recent interview, when asked about Jai Bhim being pushed in to a controversy, actor Samuthirakani said there is going to be a lot of films coming in like Jai Bhim in future. Seems like he is right and here is one that he is part of.

It is refreshing to watch actor Samuthirakani as Thangaraj. We have seen him in numerous films drumming social messages. But Thangaraj is different from them. It does not lecture the message bluntly but goes about its business but we get the message. Actor Samuthirakani has got under the skin of the character and he is simply superb. Actor Hari Krishnan is effective. Actor Kavin Jay Babu makes his presence felt. The rest of the cast has chipped in and delivered a decent performance.

On the technical front, music director Govind Vasantha’s tracks are not affecting but he tries to make up for it with his moving background score. Cinematographer Pratheep Kaliraja has covered the movie well. His shots are helpful in capturing the raw emotions. Editor Manigandan Sivakumar has done justice to his colleague’s work with his sharp trims.

On the whole, Writer has engraved a place for itself besides Vetrimaaran’s Visaranai and T. J. Gnanavel’s Jai Bhim.