From top tier heroes to the newbie stars that recently ventured in to Tamil cinema, everybody prefers the formulaic type of film making. They are simply allergic to the word experiment. Yet there are a handful of actors who just love to do experimental dramas. Actor Suriya is one among them. Though he has been riding the formulaic film making wave, he has never shied away from experimenting from time to time. His films Nandha, Pithamagan, Perazhagan, Ghajini, and the recent one Soorarai Pottru stand as corroboration. His latest venture Jai Bhim also falls in the experimental zone. The heat for political dramas in Tamil cinema is soaring. At the moment, it is architecting a profitable market space for itself in the industry. Actor Surya moves to make full use of it. So, is Jai Bhim solid enough to give actor Suriya his second consecutive victory? To know that let us get in to the movie review. 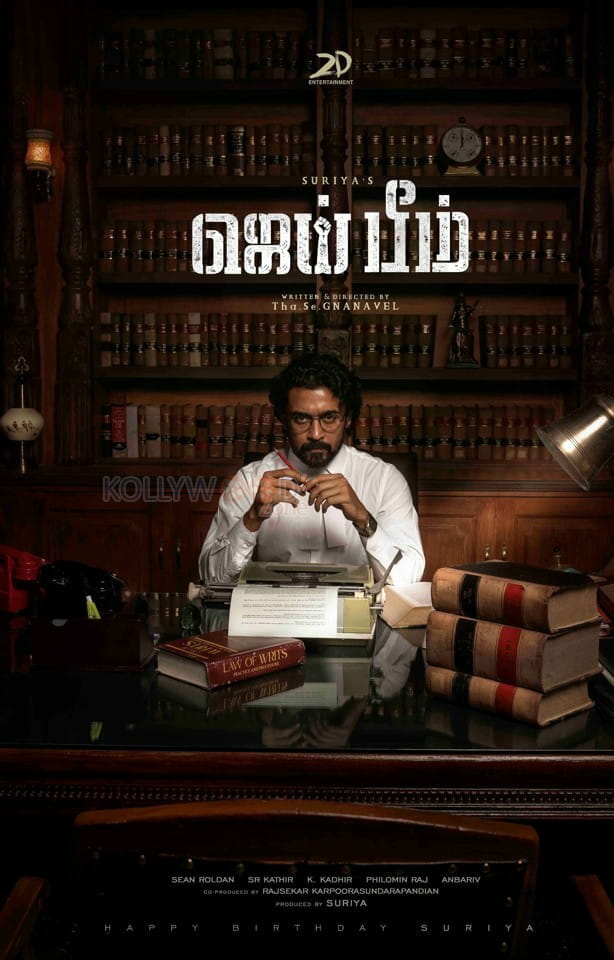 The film follows the life of Senganni (Lijomol Jose), a woman from the unprivileged caste and a lawyer named Chandru (Suriya). The story is set at the backdrop of Konamalai in Viluppuram, where Senganni and her husband Rajukannu (Manikandan) live. They belong to the Irular tribe. People in the locality suffer from poverty as they do not have access to any economic resources. Despite poverty Senganni and Rajukannu lead a happy life with their daughter. But things go down south for the family when cops come looking for Rajukannu on a robbery case. He has been branded as the chief suspect just because he had visited the house on the day of robbery to nab a snake that had entered the house. When they could not find him, they take his brother and his pregnant wife under custody. The cops behave without an iota of humanity towards them. Even pregnant Senganni is ill-treated. When Rajukannu presents himself, Senganni is released.

Rajukannu and couple of other men from his locality who have been taken in as accessories are subjected to brutal custodial violence. Later Senganni learns that her husband and the other men have fled from the police custody. But Senganni suspects foul play. She would not stop until she knows what happened to her husband. She comes to know of Chandru, an upright advocate who fights for the rights of the oppressed. She seeks his help and Chandru promises to get her justice. Will Chandru be able to find out what happened to the men gone missing, and will he make the policemen pay for their illegal and inhuman behavior, is what makes the rest of the flick.

Director Gnanavel wastes no time in getting in to the flick. Right from the word go, we get to see the politics that he wants to discuss. When Jai Bhim opens we see a group of policemen from different police stations waiting out a prison. A bunch of inmates are set free from prison. The policemen enquire the prisoners about their caste. Those who are from the privileged caste are allowed to go, while those belong to the unprivileged caste are made to wait. Then they are booked as the suspects for various pending cases. He sets up the stage right at that point and get us hooked in to the drama only to let us off the hook at the end leaving us wanting some time to recover from what transpired on screen.

One of the best things about Jai Bhim is, it does not hit the systemic oppression with euphemism but head-on right on its face. Story teller Gnanavel is clear as to what he wants his film to do. And he possesses the dexterity to pack and deliver it effectively. The way he writes his scenes, make his artists to perform, and capture them without the loss of emotions show us his strong hold over his craft.

His dialogues are razor sharp and a big plus for the flick. He brings forward the institutionalized oppression with authenticity and make us realize how difficult it is for the oppressed to even just breath. Sample this, when a cop enquires about the missing suspects, the people from the tribal group narrate about the police brutality against them one by one. Some one says that he was taken in just for greeting the cops, one says he was booked for trying to sidle past them, a woman utters she was molested in order to make her husband confess to a crime that he did not commit, and a student recalls how he was picked to the station since the cops could not find his father. On the downside, the film could not avoid spinning in to the dramatic mass hero segment now and then. If it had refrained from that, Jai Bhim could have been a solid drama.

Actor Suriya is formidable in his fight against discrimination. He is known for his roaring dialogue delivery and as Chandru his roar intensifies. Actress Lijomol Jose has bagged a meaty role. She has got under the skin of the character quite well. She makes us sympathize and fume against the systemic oppression unleashed against Senganni. Actor Manikandan is effective. Actors Prakash Raj, M. S. Bhaskar, Guru Somasundaram, Jayaprakash, and Ilavarasu have all played their part well. The rest of the cast have delivered a decent performance.

On the technical front, music director Sean Roldan’s songs are not in the best levels. But his background score is thumping and adds in amplifying the emotions. Cinematographer S. R. Kathir has captured the flick from all possible best angles. Editor Philomin Raj’s scissors are sharp and compliments the work of his colleague well.

On the whole, Jai Bhim engraves its name as one of the most powerful and daring political dramas in Tamil cinema.

Jai Bhim is out on Amazon Prime Video OTT platform.