Despite having the brother sister relationship as its core Annaatthe does not really show us the moments that constituted to the imperishable bond between them. You have seen the brother and sister bond in Tamil cinema numerous times, what is there to show, Siva seems to ask. Annaatthe enfolds a lot of silly sequences.

Super star Rajinikanth’s biggest strength is the energy that he generates in his flicks. But in Annaatthe he looks a little tired. Actress Nayanthara plays a role that more sort of looks like an extended cameo. Actress Keerthy Suresh seem like a miscast. It is hard to buy her as Rajinikanth’s sister. Actor Prakash Raj does not really have anything to offer to the proceedings.

Finally, we have a hero other than Ajith Kumar in director Siva’s film. This time it is Thalaivar and not Thala. Director Siva was fresh from the success of Viswasam when the news of him directing Rajinikanth made headlines. This skyrocketed the expectation level on this project. Film maker Siva has devised a commercially successful formula that has worked out four out of five times in his favor in the past. With the ensemble cast Siva made it clear that Annaatthe will be made on the same success formula of his. Thalaivar who basks on the success of Darbar is back on screens this Diwali with his latest family drama Annaatthe. So how has Annaatthe come out. To know that let us get in to the movie review. 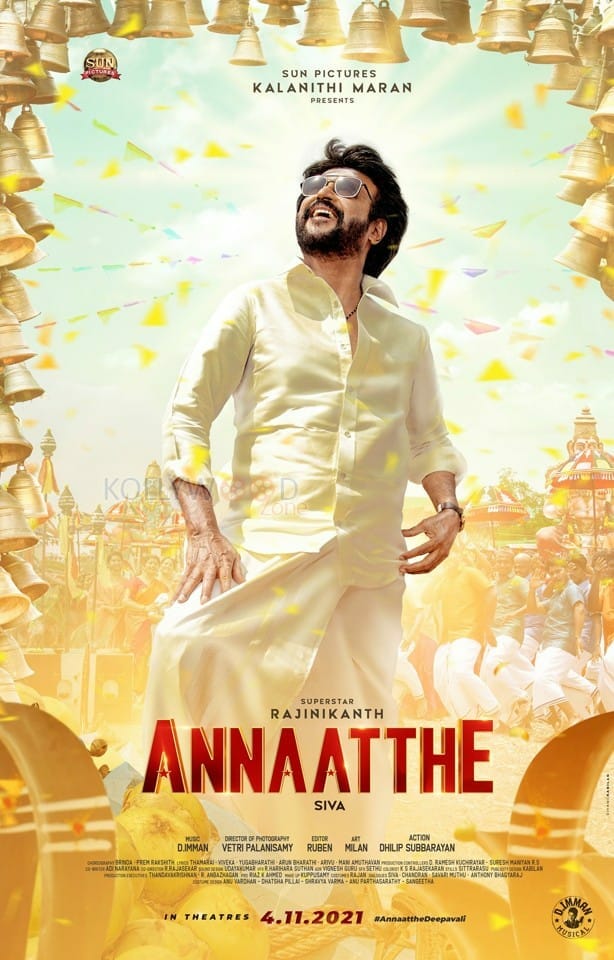 The film follows the life of Kaalaiyan (Rajinikanth), a panchayat president who is addressed with love as Annaatthe by his people. He has a sister Thanga Meenatchi (Keerthy Suresh). Yes, Annaatthe has the brother sister bond as its heart. Kaalaiyan is a brother who would even broker a deal with the gods if his sister longs for the moon. He has been taking care of his sister from the place of a mother as their mother had passed away after giving birth. Meenatchi has just returned home after finishing her studies in Kolkata. Now, her brother wants to get her married. But he has a condition. The groom should be within a boundary he demarcates. So that he can be there even before his sister thinks of help when she needs it. Fearing his bearing over his sister, potential alliances from the surroundings dodge his proposal with excuses.

A marriage alliance comes their way through Kaalaiyan’s mild rival (Prakash Raj). The evil man who once locked horns with Kaalaiyan. What happens when one run up against Thalaivar? He breaks their bone and send them flying along with the birds up in sky. But lately since Thalaivar is more in to reforming, he reforms one of his rivals, and saves his action for the villain coming up in the second half. With swarming happiness in finding a suitable groom for his sister, Kaalaiyan prepares for a grandiose wedding. However, fate has other things up its sleeves for the brother and sister duo. Thanga Meenatchi ends up in the other end of the country in Kolkata. Life gets messier for her up there. Just when she finds it hard to stay afloat, in walks Annaatthe to crush all the hazards around her and carry her in his arm all the way to Tamil Nadu.

Director Siva’s strong suit is the mass masala-esque tone that he blends along with the family sentiments. That is exactly what he has tried to do with Annaatthe. But instead of putting in efforts on developing a fresh story he takes Vedalam and Viswasam, chops it, puts the pieces in to a blender and blends them in to a fusion called Annaatthe. If the brother and sister travel together to Kolkata in Vedalam, in Annaatthe first the sister goes and the brother follows. If it was the father daughter sentiment in Viswasam, it is the brother sister angle in Annaatthe.

Despite having the brother sister relationship as its core Annaatthe does not really show us the moments that constituted to the imperishable bond between them. You have seen the brother and sister bond in Tamil cinema numerous times, what is there to show, Siva seems to ask. Annaatthe enfolds a lot of silly sequences. There is an explanation Annaatthe gives as to why he is so in to finding a doctor mappillai for his sister. Siva gives us a different vantage point to why there is an obsession over doctor mappillai and that is not the job security or a sense of pride factor. It is because even a billionaire must visit the doctor when he/she is sick. So why not get a doctor over a billionaire? Nearly Annaatthe travels in the similar fashion throughout.

Almost this is the kind of approach that Siva applied in Viswasam. But in Annaatthe he gets a little overboard with the melodramatic tone. His writing, is so weak and careless. Literally there seem to be no effort even in how a scene is built. Just the old and tired cliches. Of late, actor Rajinikanth’s films have a reminisce drift to them. Hence the name Kaalaiyan, actresses Khushbu, Meena, and references to popular films of Thalaivar. All the nostalgia things. Not long ago, perhaps even now, many directors of Tamil cinema hold a notion that having Rajinikanth on board is enough to write the success of a flick. Now it is disheartening to see Thalaivar himself rely on his glory to lit the screen.

Super star Rajinikanth’s biggest strength is the energy that he generates in his flicks. But in Annaatthe he looks a little tired. Actress Nayanthara plays a role that more sort of looks like an extended cameo. Actress Keerthy Suresh seem like a miscast. It is hard to buy her as Rajinikanth’s sister. Actor Prakash Raj does not really have anything to offer to the proceedings. Actor Jagapathi Babu has become a favorite artist for Tamil film makers. Suddenly all directors want to cast him now. He does what he has been doing for the past half a decade in Tamil cinema. Even with a bunch of comedians on board, we do not have many laughable materials. Veteran actresses Khushbu and Meena shake their leg for a peppy number. The rest of the cast has delivered a decent performance.

On the technical front, music director D. Imman is clearly not at his best. His traces are lost from our memory even before the flick ends. But he adds a little value with his background score. Cinematographer Vetri has tried his best to give us the peppy Rajinikanth that we know of. Editor Ruben has done a fine job with his cuts.

On the whole, Annaatthe does not give us the satisfactory feel of having watched a Rajini film when we walk out of the theaters.