Thala Ajith and director Siva is back with a powerful movie ‘Viswasam’ which can be considered as an extension of their commercial hit film ‘Veeram’. The director has the most dependable lady Superstar Nayantara in a strong lead role along with loveable child artist Anikha to make the movie appeal to family audiences.

Thooku Durai (Ajith) is a naïve, uneducated, courageous man, who is respected and loved by the folks in Madurai district. When a doctor Niranjana (Nayantara) comes to his village, he falls in love with and they get hitched. Just when their daughter, Swetha (Anikha) is born, Niranjana finds that Thooku Durai’s life and behavior will influence her daughter’s future. A disheartened Niranjana relocates to Mumbai and the couple lives separated for ten years. But, situation reunites Thooku Durai and Niranjana and there is an antagonist (Jagapathi Babu) who tries to kill Swetha. 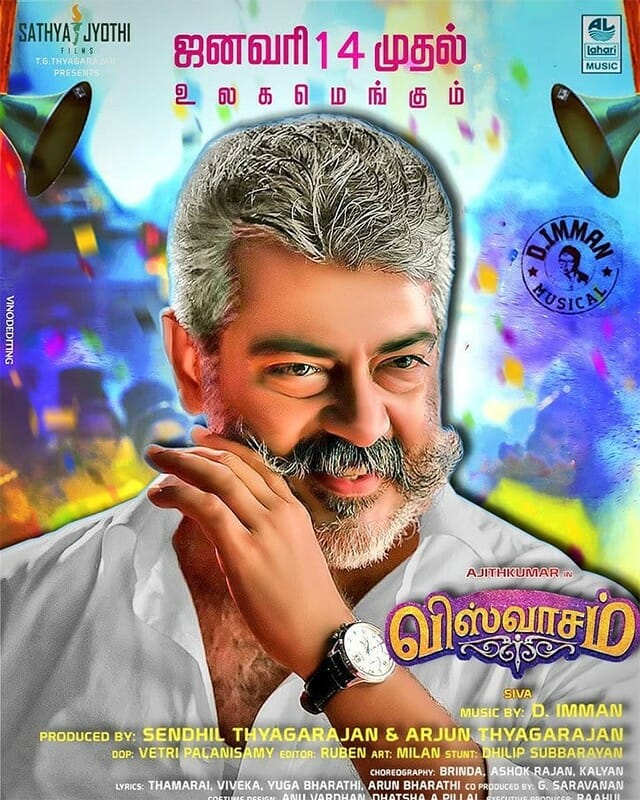 The first half of the film is a family drama. Except the interval fight sequence, the major parts of the first half will be a hit with the family audiences. Slowly, Director Siva also includes enough interesting elements to satisfy Ajith’s fans with rocking fight scenes, comedy, mass punch dialogues, and songs.

Ajith is charming and looks super energetic as Thooku Durai. He performed well in dramatic scenes, but nailed doing romantic and comedy sequences. Nayantara as the bold and head-strong Niranjana, is a perfect choice. She looks stunning as usual and her dressing and making is super stylish. The comedy troop Robo Shankar, Yogi Babu, Thambi Ramaiah, and Vivek give endless laughter throughout the film. But, Jagapathi Babu’s role is poorly characterized and he is a weak villain.

Though ‘Viswasam’ is an engaging film, it tests your patience level with a usual screenplay and climax. The songs and background music by Imman are good. Ruben’s editing is perfect and the film’s duration is ideal for a mass family entertaining.

The major plus of the movie is the alluring lead pair, perfectly choreographed songs, and a good dosage of comedy. On the whole, ‘Viswasam’ is a “pakka” family entertainer for Pongal 2019!