The mass factor just won’t go away from Tamil cinema. Even at a point when Tamil cinema is just starting to evolve to a different outlook, the market for mass commercial films still remains solid. The latest addition to the raucous styled films is Karthi’s Sulthan. It is a hat trick release for the actor in this genre preceded by Thambi and Kaithi. Director Bakkiyaraj Kannan borrows mass and masala scenes from various popular movies, ties them together and paints them with rowdyism and agriculture. Did the two contrasting factors gel well to form an admirable art or did it end up just as a doodle? To know that let us get in to the movie review. 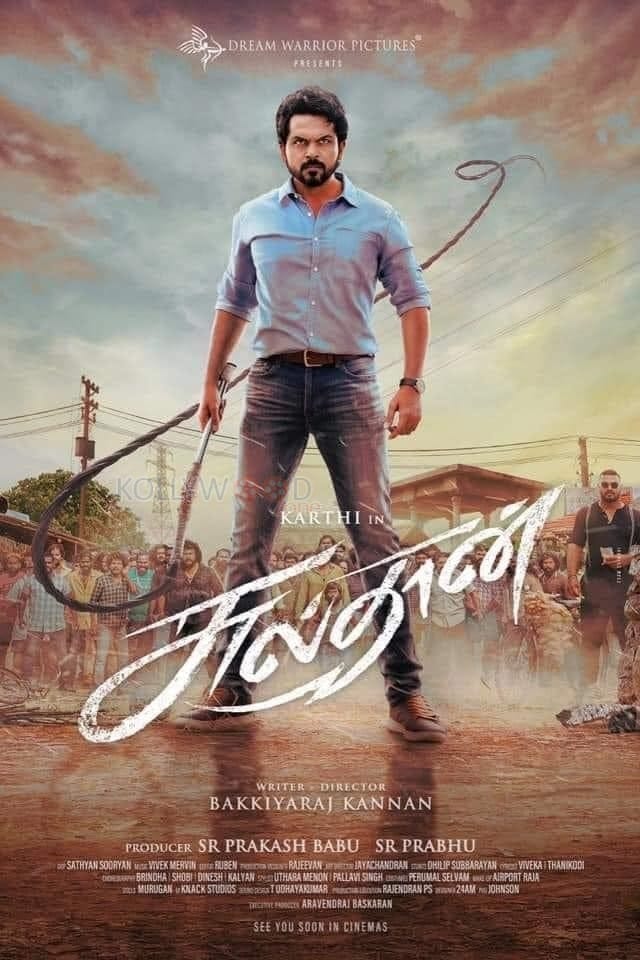 Sulthan opens with a pregnant woman being told that her child has a similar nature to that of popular Mahabharata character Abhimanyu – listening and learning from the conversations she has. That’s how the fetus learns about its mother’s yearning to bring her do-gooder mobster husband Sethupathi (Napoleon) and the gang he runs, to lead a normal life. The child is born. But sadly the mother passes away during delivery. The child is named as Vikram (Karthi) but the gangster clan calls him Sulthan. A crisis occurs between gangs and the child is put in the custody of Mansoor Bhai (Lal). Sulthan grows up to be a robotics engineer. Meanwhile, in a village, Jayaseelan (Ram), a cunning gangster tries to grab the agriculture lands of the villagers for a corporate company. The villagers seek the help of Sethupathi and he promises to help them. Unfortunately, in an encounter attempt he gets brutally wounded and loses his life. A newly appointed commissioner of police (Hareesh Peradi) in an attempt to restore law and order in the city comes after the gang members of Sethupathi.

Sulthan takes it up on himself to straighten the gang members. His father’s promise to the villagers acts as a way to facilitate his mission. He takes the entire clan to the village to offer protection to the villagers. In the village they begin to assist people in farming. Sulthan meets Rukmani (Rashmika Mandanna), in the village. Yep, he falls for her. Then in walks a corporate boss greedy for farming lands. How will Sulthan save them? Will he take up the very violence path that he wanted his gang member to leave or will he resolve the issue diplomatically, is what makes the rest of the flick.

In his previous film story teller Bakkiyaraj Kannan entrusted on his hero’s star power and comedy for success. In Sulthan he has tried to play it even safer. He has picked out two unique selling points of the industry; gangster and agriculture. And built two separate plots on them, ran them parallel, and at the right time merged them together to set the tone of his drama. To be fair, he has got everything in accord to the commercial Tamil film formula – omnipotent image to the protagonist, agriculture, violence, romance and songs. But he could not get the audience to pin for the characters and feel for what is happening on screen. He does the same mistake many of the film makers do – not being clear about what they want to deliver and using agriculture aimed just at shaking our conscience.

He wants to talk about farmers and their predicaments. But we do not get anything concrete till the end to understand their lives. All we get is some exaggerated fiction to evoke empathy. It is high time that the directors of Tamil cinema realize that this strategy is not working anymore. Also, there is this conflict angle where the take on violence shifts according to the hero’s comfort. On one end, the hero takes his gang to the village to preach non violence but he ends up breaking bones. Seems like even violence is also only for privileged few! The characterization of the henchmen is another flaw. They are all the same and have no normal human emotions. The romantic track suffers due to lack of authenticity. Perhaps, we should be content with the female lead not depicted as ‘loosu ponnu’.

Actor Karthi is natural. He seems to have gotten comfortable with breaking bones and pulls of the character with ease. Actress Rashmika Mandanna does not have anything to offer to the plot other than her charm. Actor Lal is fantastic as always. Veteran actor Napoleon makes his presence feel even in an extended guest appearance. Other than few portions comedian Yogi Babu’s jokes do not land well. The rest of the cast has delivered a decent performance.

On the technical front, music director Yuvan Shankar Raja’s background scores are deafening while Vivek & Mervin tracks do not make an impact. Cinematographer Sathyan Sooryan has done a decent job covering the flick. Editor Ruben has complemented the work of his colleague with his sharp trim.

On the whole, despite with flawed writing and conflict towards the very own message that the entertainer attempts to deliver, Sulthan manages to hold our attention.