After his last mega hit flick Petta superstar Rajinikanth is back on screens with his yet another mass action film Darbar. Apart from catching thalaivar on screen, the additional treat in Darbar for thalaivar’s fans, is the opportunity to witness him don the Khakhi uniform nearly after 3 decades. Film maker A. R. Murugadoss after all the controversies around his recent entertainers has decided to go out of his message delivering tendency to do an outright mass action drama. Director A. R. Murugadoss’s strength lies in the core element that he picks to built the story of his movies. It was vigilante justice against corruption element in Ramana, revenge of a lover suffering from memory loss element in Ghajini, farmer’s issues in Kathi. But here in Darbar he chose to opt for the done to death cop revenge story. 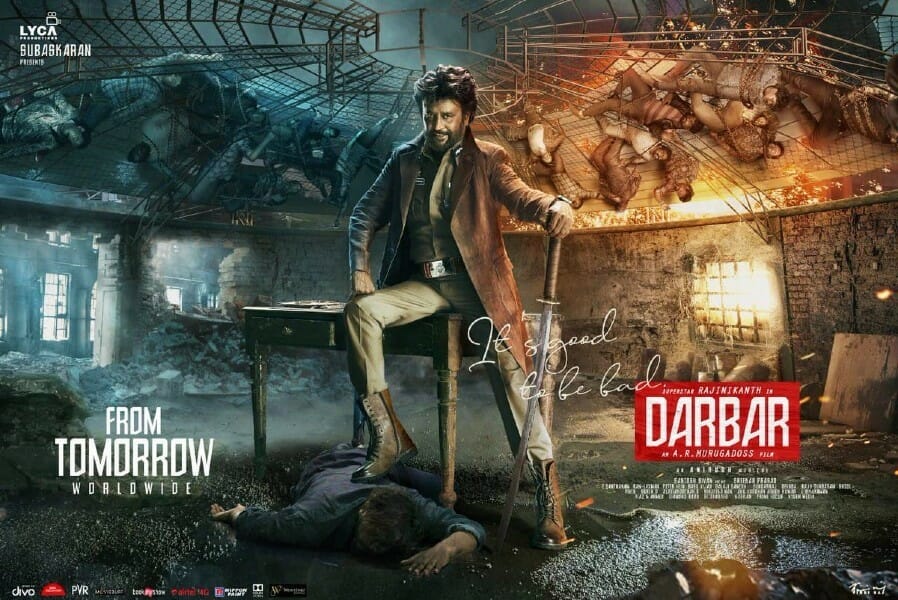 The film opens with headlines all over the news stating that the commissioner of Mumbai police Aditya Arunachalam (Rajinikanth) has gone mad and is carrying out berserk encounters in the city. He is summoned by the human rights commission where he roughens up the officer to submit a report in favor of him to her superiors. The film cuts to the flashback, where we get to see Aditya Arunachalam as a badass cop who typically like the heroes of A. R. Murugadoss film’s never hesitate to go out of the rule book to ensure justice is served. He gets posted as the commissioner of Mumbai city and is bestowed with an operation to cleanse the city and make the city free of child traffickers, drug gangs and other unlawful activities. He arrives with his daughter Valli (Nivetha Thomas) to Mumbai and takes charge as the city’s commissioner.

Then the game begins as he starts his operation immediately and ransacks the drug trade that is underway in the city by taking out the drug dealers. On one such operation he nabs Ajay Malhotra (Prateik Babbar), a young drug mafia head and puts him behind the bar. But while on a random inspection of the criminals in prison, he learns that a proxy has taken the place of Ajay Malhotra in the prison. Taking this as an opportunity to eliminate Ajay, he drafts a neat murder sketch and takes him out successfully. But the game does not end there it just begins as Ajay happens to be the son of an international drug lord Hari Chopra (Suniel Shetty) who fled India after ruthlessly burning down several cops who were on his way.

Hari Chopra learns about the death of his beloved son and you know what he would want, it is revenge. He sets foot on India nearly after 2 decades to avenge the death of his son. He devises a plan and takes out Valli by means of a car accident. And now Aditya will stop at nothing and embarks on a killing spree to get to Hari Chopra. Will Aditya manage to destroy Hari Chopra is what makes the rest of the movie.

By know you must be wondering what of the lady superstar Nayanthara? Then you realize it is thalaivar’s film and it is on him the whole limelight falls. The one liner of Darbar simply puts forth the done to death plot line of Kollywood as well as Tollywood but it is the charisma, energy, and vigor of thalaivar that makes the entertainer a watchable one. In other words, if Darbar had had any other actor as its lead it would simply have been a tedious watch. Director A. R. Murugadoss has attempted to capitalize on the Petta effect but has fallen short of penning a screenplay that despite logics made Petta an enjoyable watch.

Normally, mass hero films of Tamil cinema, apart from building a larger than life image for the hero, focuses on the chemistry between its lead characters. But in Darbar the director has worked on developing a breezy father daughter chemistry minimizing the romantic portions. Perhaps, it was done deliberately to keep the love trace with Nayanthara as minimum as possible. Even a character in the flick randomly comments on the age difference between the two, the director treats it in a subtle way.

Superstar Ranjinikanth has once again proved that he has the gratifying magical sensation and star power in him to make even a very ordinary film in to a watchable one. Actress Nivetha Thomas has bagged a meaty role in the flick and has done justice to it. In fact the father daughter chemistry has worked out very well. Lady superstar Nayanthara plays the character Lily, which in no way influences the plot and it merely exists as the obligatory commercial element. Like all superstar’s villains of late, even the menacing and beefy Suniel Shetty falls short of being a worthy villain.

On the technical front, it is evident that musician Anirudh Ravichander has totally enjoyed scoring the back ground score of Darbar. Cinematographer Santhosh Sivan as usual has worked wonders with his frames. Makeup artist Banu, and costume designers Anu Vardhan and Niharika Khan deserves a special mention for making thalaivar look younger and stunning.

On the whole, Darbar is an ordinary action masala film but the presence of superstar Rajinikanth has elevated it to a watchable level.