After an extraordinary master piece Asuran and the long delayed Enai Noki Paayum Thotta actor Dhanush is back on screens with his commercial action drama Pattas. Story teller R.S. Durai Senthil Kumar has once again depicted actor Dhanush in dual roles after the political action entertainer Kodi. While it was the twin brother characters in Kodi, here it is the dual role of father and son. Just like the revenge for betrayal angle in Kodi, even Pattas has a similar angle to it. But what makes the customary revenge saga engaging to an extent is the film makers attempt to lay light on the long forgotten traditional martial art form of Tamilnadu called Adimurai. But is it enough to save the entertainer? 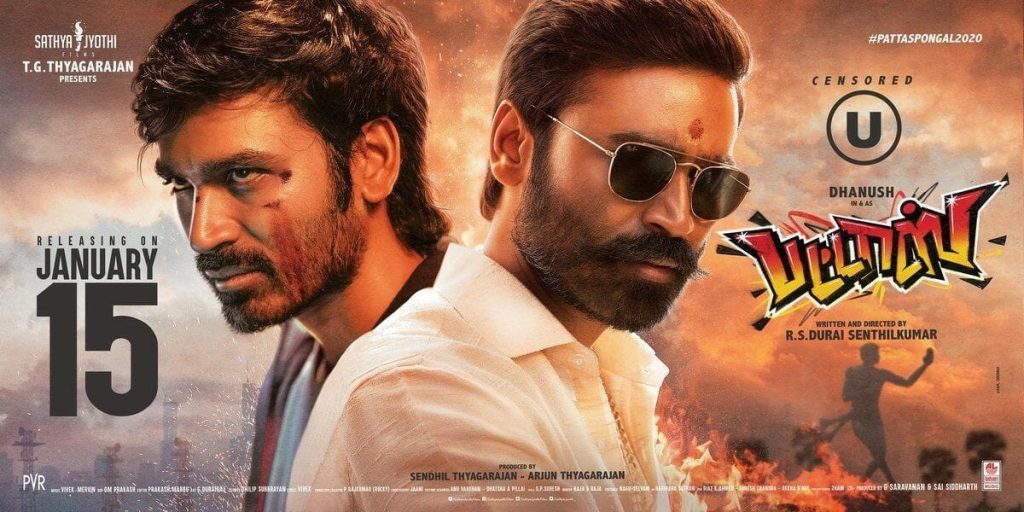 The flick opens with Kanyakumari (Sneha) sentenced to serve years in prison for murdering a foreigner. She completes her time in prison and now even after doing her time in prison all she wants to do in life is to avenge the death of her husband Thiraviya Perumal (Dhanush), who was brutally murdered by Nilan (Naveen Chandra). The scene then cuts to Sakthi aka Pattas (Dhanush), a happy go lucky youngster in a slum in Chennai. He makes ends meet by indulging himself in petty crimes along with his friend Puncture (KPY Sathish). What else does a carefree and jobless youngster of Tamil cinema do? Yes, no points for guessing it right. We have Sadhana (Mehreen Pirzada) a bubbly girl from Pattas’s neighborhood whom he tails behind and teases playfully.

On one instance she asks Pattas to break in to a MMA academy that is run by bigwig Nilan and his son Richard to steal few documents that belong to her. Pattas steals the documents with ease without any idea about his connection with Nilan. Then his life crosses path with his long ago estranged mother Kanyakumari from whom he learns about his past and his connection with Nilan and how he killed his father for his own personal gains. Filled with rage and desire to avenge the death of his father Pattas decides to take on Nilan and prove that Adimurai is the best form of martial arts. Did he manage to defeat Nilan and reinstate the glory of Adimurai, is what makes the rest of the flick.

Director R.S. Durai Senthil Kumar’s adeptness to build the script around an interesting element like Adimurai has paid off positively to a degree but certainly not enough to propel Pattas in to the complete entertainer zone. He has also penned the script with a higher quotient of predictability and that obvious premonition of what is coming up next makes it difficult for the audience to stay connected with the movie. Also, the screenplay here is not tight enough to keep the audience engaged. On the positive note, slightly contrast to the way the film makers of Tamil cinema treat their heroines, director R.S. Durai Senthil Kumar usually gives a fair scope for his female characters and he has upped that in Pattas with Sneha’s characterization which is easily the best part of the movie. If the director had penned his character with more depth and worked a little more on exploring the Adimurai element, Pattas could have been a much better, in fact an interesting entertainer.

Actor Dhanush pulls off both the roles effortlessly though it is hard to buy him as a martial arts champ. To be honest they are merely cakewalk roles for an artist who has seasoned himself to make every part of his body to perform. But the lethal trend of having to deliver a masala film followed by a content oriented film in Tamil cinema is a serious matter to worry about. What is even more worrying is to witness even an actor at the stature of Dhanush having to oblique to this trend.

Actress Sneha who was away from the industry for a while has made a comeback with a note worthy role and she shines brightly equally to Dhanush with her performance in the flick. While one heroine gets a heavy role in the flick, the other heroine Mehreen Pirzada’s role is just like the roles that actress Kajal Aggarwal does back to back. It seems like the Tamil cinema industry has found a perfect substitute for actress Kajal Aggarwal. Baddie Naveen Chandra falls short of being an effect villain. Perhaps, his characterization is deliberately sketched in a lighter tone to uplift the heroic image of the lead character.

On the technical front, musician duo Vivek and Mervin have delivered a vibrant background score though their songs does not impress much except Chill Bro which has already taken its place in the playlist of many youngsters in the state. Cinematographer Om Prakash’s frames have added beauty to the chemistry of actor Dhanush and Sneha while capturing the vivacious of actress Mehreen Pirzada.

On the whole, Pattas happens to be just another entertainer in Tamil cinema in the background of revenge for betrayal template but with an interesting element Adimurai implanted to it.