A solid and gripping revenge saga propelled to a whole different level by actor Dhanush K Raja’s stellar performance but not one of the best of Vetri Maaran’s masterpieces.

Another crime thriller film under the successful Vetri Maaran and Dhanush combo and another good entertainer is what we are bestowed with. This is the fourth time the combo has joined hands together and they have delivered yet again. Film maker Vetri Maaran is one of his kind in Tamil cinema who roots his characters deeply rather than weaving a plot around the centric character of the film. The director has yet again registered his signature in the recent release Asuran. With Vetri Maaran being the captain of the ship, actor Dhanush has always displayed his acting prowess and Asuran stays in that course as well.

Siva Saami (Dhanush) is a farmer who hails from an underprivileged caste in a village. Siva Saami has a violent history as a teenager and chooses to leave behind his violent life to take care of his family. Now as a father his life revolves around his family which consists of three children and his wife Pachaiyamma (Manju Warrier). He owns a piece of farming land and is happy with the source of income that it provides. But Narashiman (Aadukalam Naren) a rich and powerful man who belongs to the upper caste family hailing from a nearby village conspires to snatch the piece of land that Siva Saami holds so that he can set up a cement factory. 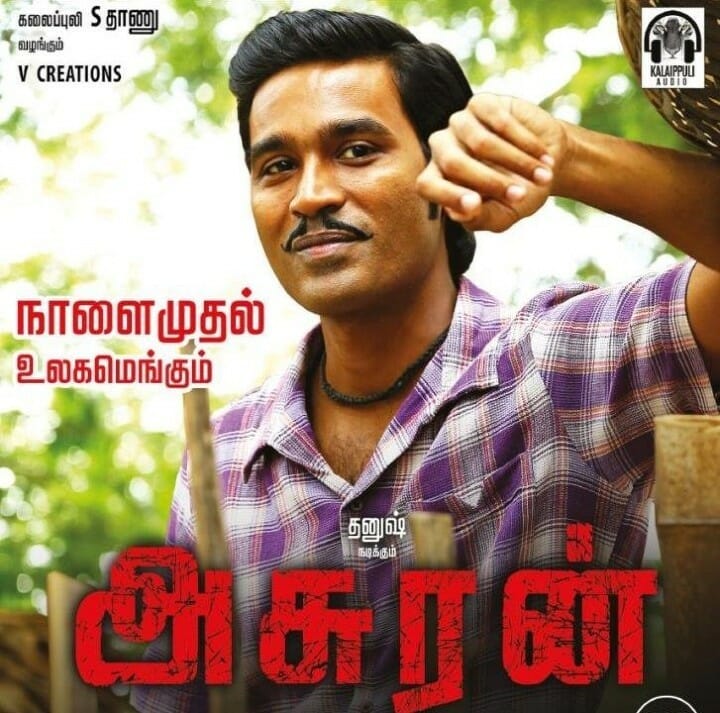 The tension between the two families keeps escalating gradually over time. Things go down south when Siva Saami’s elder son Velmurugan (Teejay Arunasalam) humiliates Narashiman on one occasion. Siva Saami is busy with finding a bride for his son Velmurugan. Meanwhile, raged for revenge Narashiman has Velmurugan brutally killed to even the scores. Though saddened by the way things escalated, Siva Saami attempts to save the rest of his family through antiviolence approach. But Pachaiyamma finds it difficult to move on from the loss of her son and suffers miserably in pain. Unable to witness his mother suffer Siva Saami’s enraged younger son Chidambaram (Ken Karunas) hacks Narashiman to death. Now the family members of Narashiman are after Chidambaram and the entire family. With having no other choice left Siva Saami is forced to walk down the violent path that he gave up at one point of his life to safeguard his family. Did Siva Saami manage to save his family from the blood seeking crooks, if so how did he do it, is what makes the rest of the film.

Asuran is not just a revenge saga, on its running time towards the end it lays light on caste discrimination, social injustice, and power politics. Though the film may not go down the lane of director Vetri Maaran’s collection of best piece of art works, it sure has the trademark of him indisputably. Even if the one liner of the plot is a done to death template in Tamil cinema, story teller Vetri Maaran’s treatment has made it a compelling watch. The first half of the flick was runny and rock solid but it was in the second half where the film lagged behind due to the flashback portion which might have been penned more cautiously.

Actor Dhanush K Raja is overtly the show stealer with his stellar performance. Siva Saami is simply one of the career best performances of the actor. Malayalam actress Manju Warrier could not have asked for a better role to make her debut in Tamil cinema. The actress has landed in a meaty role and has done justice to the purpose of being on board. Debutants Ken Karunas and Teejay Arunasalam have surprisingly put on a commendable show with ease. The rest of the cast has also delivered elevating performances which have added great strength to the crime drama.

On the technical end, musician G. V. Prakash Kumar has pushed the dreadful drama in to a gruesome one with his unnerving background score which is further supplemented by the frames of cinematographer Velraj. Editor R. Ramar has diligently trimmed the thriller drama which helps in keeping up the speedy run.

Vetri Maaran has done justice to the adaptation of the novel Vekkai, work of popular writer Poomani. Director Vetri Maaran builds up the tension in the first half with a survival drama theme where the plot moves from the perspective of an ordinary man opting to deal injustice in a nonviolence approach. It also makes the audience root for the character. Later in the second half where the inevitable mass hero moment arrives the commercial escalation takes a slight upper hand which spoils the essence of the core plot. Other than that the film is a good entertainer with solid characterization and a gripping screenplay.

On the whole, Vetri Maaran and Dhanush bags gold yet again in their reunion Asuran which turns out to be a solid sociopolitical crime thriller.