After a long hurdle filled journey ‘Thittam Poattu Thirudura Kootam’ the film which went on floors in the year 2016 has finally hit the screens this weekend. Unfortunately, the venture only gives the audience the impression that the plummeting Tamil cinema industry would not have further added up a huge weight to the boat if the film had not seen the day light. Just at the time when actor Radhakrishnan Parthiepan has been garnering a lot of appreciation for his experimental drama Oththa Seruppu Size 7, comes in a flick which totally shatters the image of the star. And leaves us wondering what would have made the actor settled to star in the film which is par below in standards in all cylinders.

The film is all about how five individuals team up to draft a plan to rob the world cup trophy during the finals of the world cup 2011 which was played between India and Sri Lanka. Being a cricket loving nation, naturally the one liner of the film might sound alluring. But the cooked up stuff is not what one expects it to be. Rightly, the team gives us an indirect warning at the beginning of the film by asking us to believe in magic and not in logic of the script. Yet without giving up hope you decide to sit through the movie but what is that you get in the end, fatigue and almost a couple of hours assault on our intelligence. 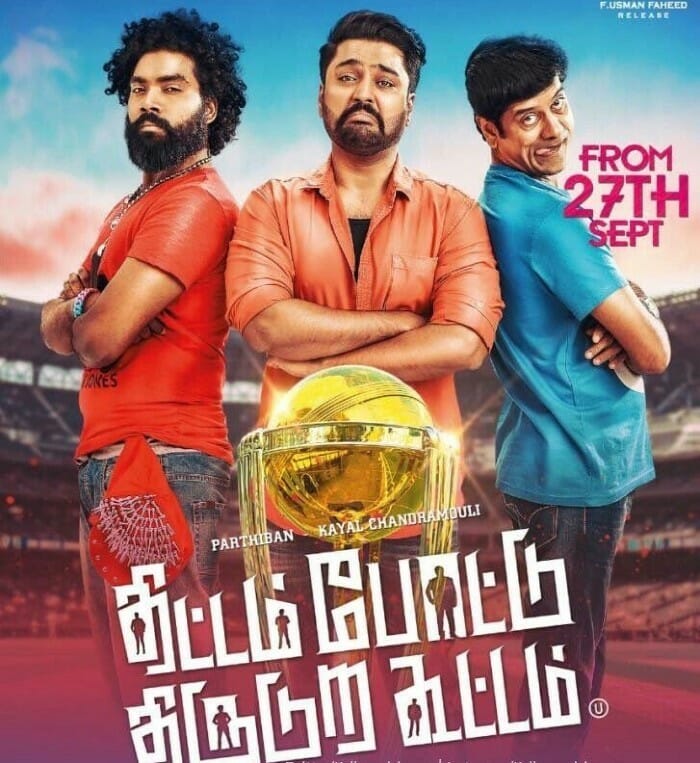 Siva (Chandran), a youngster after successfully accomplishing a couple of petty burglaries along with his team Sethu (Radhakrishnan Parthiepan), Anjali (Satna Titus), Gaja (Daniel), and Padmanabhan (Chaams) aims to do something big. That is the period when the world cup is on play and is the hot topic in the country across all platforms and people. The final match of the world cup is nearing. But to everyone’s surprise the finals that actually took place in Mumbai is set to have happened in Chennai in the film. Now, you know why you should believe in magic. Anyhow, the gang comes up with an idea to steal the world cup trophy during the final match and drafts a mind blowing plan (which you will have to see for yourself as it is impossible to pen down what was experienced) to do so. The way the gang rolls out their plan and did the gang succeed in their attempt to steal the trophy is what makes the rest of the film.

Debutant director Sudhar who happens to be a contestant of a popular TV show has dished out a disastrous film which not only lacks a script but also has failed in all cylinders. The one liner seems to be good on paper but the execution and development of the screenplays has totally failed the film. The entertainer is billed as a heist comedy thriller. To bake a successful heist thriller edge of the seat experience and high octane action sequences are the main ingredients which the director seems to have by no means given a thought about.

Actor Chandran has delivered what was asked of him and so is actress Satna Titus. Actor Radhakrishnan Parthiepan impresses the audience with his slapstick comical expressions and dialogue delivery but that gets jaded after a certain point. Chaams and Daniel Annie Pope have tried hard to do the job for which they were brought on board but the poor writing has failed them miserably except few comical one liners. The rest of the cast has delivered adequate performances.

On the technical front, nothing appears to have gone in the right direction for the entertainer as all technical departments including the editing department of the drama have turned out to be a big downer for the flick.

Director Sudhar’s intention clearly seems to be to entertain the audience with a fresh plot. But it is his action of involving in casual and lazy writing, adding up lackluster witty scenes, and total ignorance to logics has resulted in making a catastrophe film. Also, the lack of strong technical crew has further supplemented to the downfall of the flick. The film attempts to descend in the lines of films such as Chennai 28, Goa, and Nanum Rowdy Thaan but ends up being a parody of itself.

On the whole, the match that Thittam Poattu Thirudura Kootam plays simply makes the audience all out in just initial 30 minutes of the innings.