Theethum Nandrum which has been in production for nearly more than 4 years has finally hit the screens. In a time when established heroes films struggle to stand up to expectations, it is good to see underdog films made on shoestring budget come out well. Few weeks back it was director Hemambar Jasthi’s Care Of Kaadhal and film maker Halitha Shameem’s Aelay. This week we have debutant story teller Rasu Ranjith’s Theethum Nandrum. On his debut, director Rasu Ranjith has chose to go with one of Tamil cinema’s favorite genres – a gangster based crime thriller. The flick has a strong aura of critically acclaimed entertainers of film maker Vishnuvardhan’s Pattiyal and Sasikumar’s Subramaniapuram. Despite built on a familiar plot line director Rasu Ranjith uses his technical prowess to make Theethum Nandrum griping. But is the entertainer solid enough to receive the acclamations that its predecessors received? To know that let us get in to the movie review. 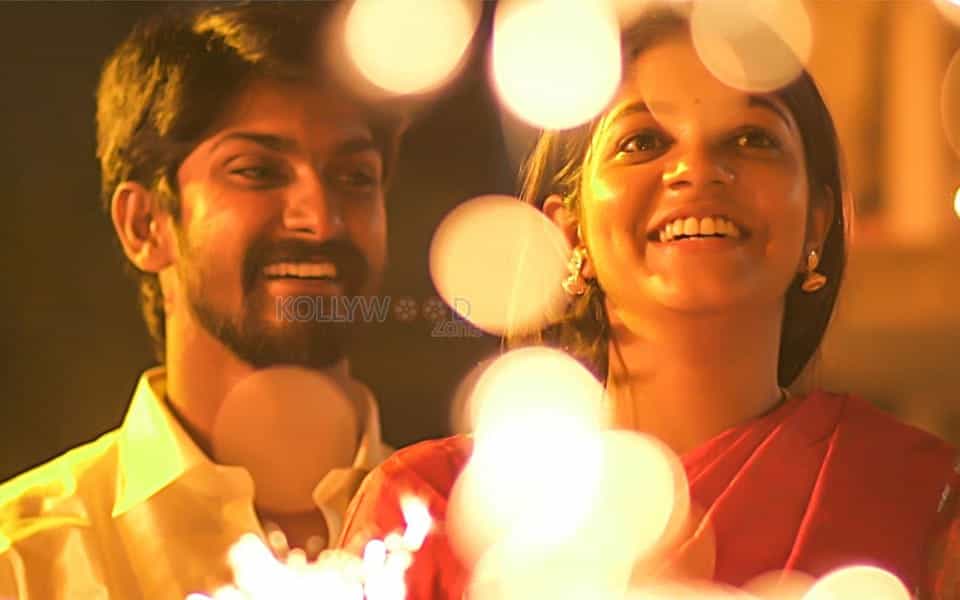 The film is centered on three close friends Siva (Rasu Ranjith), Daas (Eesan), and Maaran (Sandeep Raaj). They are small time thieves who plan and execute their burglary to perfection. They have no moral responsibility and live a carefree life. Theethum Nandrum opens with Siva, Daas, and Maaran robbing a petrol bunk. They execute it successfully and escape from the spot safely. Apparently, they spend it lavishly by partying. When their lives move aimlessly Daas falls in love with Sumathi (Aparna Balamurali) and they both get married. Even after marriage Daas continue to involve himself in robberies. But Sumathi asks him to give up his criminal activities and work hard to make a living. Turning a deaf ear to her Daas carries on with his unlawful activities and while on a robbery he gets caught and ends up in jail. In absence of her husband Sumathi struggles hard to run life.

Life in jail changes the way Daas sees life and he decides to have an honest living. But when he comes out of jail Maaran asks Daas and Siva to join him on a robbery. Daas hesitates and informs them of his decision. However, Maaran attempts to convince Daas to quit after one final robbery. Will Daas agree to Maaran’s proposal, if so will they succeed in their attempt or get caught in the act, and what will happen of Sumathi, is what makes the rest of the flick.

In a recent interview, director Rasu Ranjith had stated that though Tamil cinema has had several flicks with the similar backdrop, Theethum Nandrum will be unique in its treatment. And the story teller stands by his word.

Films based on gangs and gangsters always enjoy a good reception among Tamil cinema audience. In a year, over hundreds of gangster movies hit the screens but very few dramas leave an everlasting effect. Entertainers like Pattiyal and Subramaniapuram are classic example for it. In that line director Rasu Ranjith takes inspiration from these flicks to frame his story line. But he refrains from committing the common mistake that most film makers commit – weaving similar or clichéd scenes from popular films in to their plot. With this practice is how he elevates Theethum Nandrum. It is also the part where story teller Rasu Ranjith showcases his attentive writing prowess. Irrespective of how bad the treatment of a film is, a cleverly written character always makes an impact. Theethum Nandrum boasts of such well written characters.

Director Rasu Ranjith is adept in depicting human relationships and handles human emotions quite well to keep the audience hooked till the very end. He brilliantly narrates the lives of people who are involved in robbery and how people around them have to suffer the consequences for their criminal actions. Also, his sketching of the robbery scenes is decent enough to hold our attention. On the downside, at times the flick slides in to melodramatic tone giving us an unpleasant feeling. Few characters and sub plots end abruptly without conclusion. Besides the sub plots do not influence the main plot in anyway and merely feels like they were added to just drag the flick. Perhaps, having the sub plots chopped off could have made Theethum Nandrum a lot more crisp and solid.

Theethum Nandrum was supposed to be actress Aparna Balamurali’s debut flick. The actress is natural and has delivered an affecting performance. Especially, she scores well in the emotional sequences. Debutant actor Eesan shines with his performance. Director Rasu Ranjith has also played one of the lead roles and he has delivered a decent performance for a debutant. Actress Lijo Mol Jose has delivered what was asked of her. Actor Sandeep Raaj is convincing in his role. The rest of the cast is adequate for the film.

On the technical front, music director Sathya’s tracks are not bad while his background score enhances the mood of the scenes, accordingly. Cinematographer Kevin Raj’s frames could have been better in covering the drama. Director Rasu Ranjith who has edited the movie could have sort professional help.

On the whole, with crisp running time Theethum Nandrum could have been a solid entertainer but it is still worth a watch.