After watching Teddy all one could feel is that film maker Shakti Soundar Rajan has fallen short of expectations. Even worse, he has not even crossed half the line. Why do you make a film with a teddy bear as one of its leads, to get the attention of the children by throwing in some fun moments, right? But we are deprived of that expectation as well.

The list of entertainers using the digital space keeps increasing and Teddy is the latest drama to join that list. Actor Arya was last seen on screens in the year 2019 in actor Surya’s Kaappaan in which the star essayed a supporting role. Last year the star actor did not have a release. But this year he has opened his account earlier with his fantasy crime thriller Teddy. Arya’s wife and actress Sayyeshaa plays an extended guest role. Story teller Shakti Soundar Rajan who is known for crafting films with unique plot lines like Naaigal Jaakirathai, Miruthan, and Tik Tik Tik has helmed Teddy. Even this flick has a fresh plot line for Tamil cinema – the lead actor travels with a teddy bear to hunt down people involved in illegal organ trading. The teddy bear factor is clearly aimed to garner the attention of the children. So how has Teddy come out and will it leave a mark in the fantasy thriller genre? To know that let us get in to the film review. 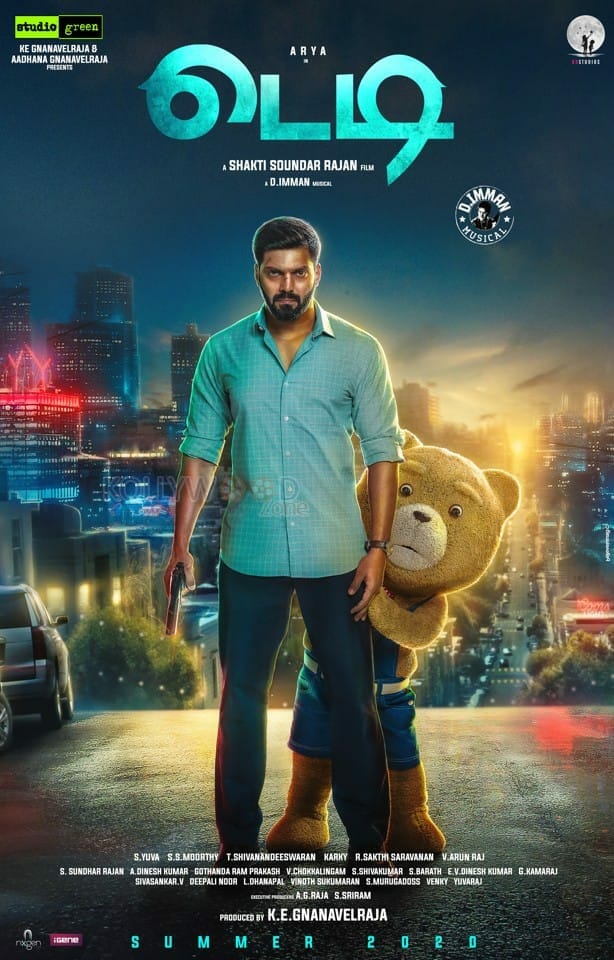 The film revolves around Shiva (Arya), a young man with eidetic memory and intelligence to learn even complex stuffs quickly. He is a concoction of a superhuman and a nerd who loves solitude. And yes he has OCD. The film opens with an accident – a bus runs in to a person travelling on a two wheeler. Sri Vidya (Sayyeshaa), a young college student with a rare blood group, who is a passenger in the bus, comes forward to help the injured motorist. But in the process she gets injured and is sent along with the injured motorist in the ambulance for treatment. At the hospital her rare blood group gets her in to the hands of medical mafias who are part of an illegal organ transplantation network. In the pretext of offering her first aid the medical stuffs put her in to medically induced coma. From here is where the fantasy element kicks in. While she remains in coma she experiences an out of body experience and her soul gets in to a teddy bear of a patient in the hospital.

Now this teddy bear with the memories of Sri Vidya and ability to perform certain humanly tasks escapes from the hospital. It runs around the city until it comes across Shiva and seeks him for his help. For a man who could not get along with people easily, Shiva becomes close with the teddy bear. Up on learning the state of Sri Vidya’s physical body Shiva along with his pal (Sathish) sets out to find if she is alive or not. Just after deploying commonly used technologies they track down the international mafia network which operates from Azerbaijan. They travel to the country to take on the boss of the organization, Dr. Varadarajan (Magizh Thirumeni). Is Sri Vidya still alive, will she get her soul back in to her body, and will Shiva be able to bring the culprits behind this illegal ring to justice, is what makes the rest of the flick.

It is not often in Tamil cinema we get an animated character being a part of an entire film. That was why when story teller Shakti Soundar Rajan officially announced teddy, it garnered the attention of the audience even without much promotions. Apparently, the expectations skyrocketed. But after watching teddy all one could feel is that film maker Shakti Soundar Rajan has fallen short of expectations. Even worse, he has not even crossed half the line. Why do you make a film with a teddy bear as one of its leads, to get the attention of the children by throwing in some fun moments, right? But we are deprived of that expectation as well. Indeed there are portions where the teddy bear acts funny but they are not effective enough for us to jump in and enjoy the flow of the film.

Director Shakti Soundar Rajan has framed his plot line in a way that fits the fantasy element quite well. But his weak writing turns out to be his Achilles heel and does not support his vision. Besides the first few minutes, the director tries to move the first half of the entertainer with his trump card – the teddy bear. He depicts the inconsistently funny and bonding between Shiva and the teddy bear. But his characters are not convincing for us to connect with them. Later in the second half as the flick begins to get serious the loopholes pierces the plot inestimably and hard causing hindrance for the viewers to stay invested in the entertainer. Perhaps, if one could overlook those elements, Teddy could be their cup of tea.

Actor Arya is known for his natural performance but he struggles with his performance in Teddy. It is hard to buy Arya as an introvert. Though the drama in a way revolves around actress Sayyeshaa, she does not have much to offer to the plot except the forced romance track. Comedians Sathish and Karunakaran do not live up to the purpose of their presence. Actor Magizh Thirumeni is clearly a miscast as an antagonist, as his performance is artificial and looks funny rather than intimidating. The rest of the cast has delivered a decent performance.

On the technical front, music director D. Imman adds value with his tracks and background score. Cinematographer Yuva could have been better in handling his frames. Editor Shivanandeeswaran has done a decent job with his trims.