An honest emotional rural drama which attempts to recite a touching and throbbing tale and succeeds in doing it to an extent.

At a time when realistic rural dramas are in the verge of extinction in Tamil cinema director P. Marimuthu’s bold attempt to film an organic rural drama deserves to be appreciated. Equally the credit also goes to the producer Shaman Mithru who not only chose to bankroll the flick but to make his debut as a lead hero in the flick. The film gets our attentions with its opening note to the audience that conveys the flick is not fiction and it is based on real life events that occurred in Southern regions of the state. If you had happened to come across the promotional posters of the flick you would have noticed the wordings ‘vendha soru, sutta kari, patta saarayam.’ Apart from romance these elements occupy a significant space in the drama. 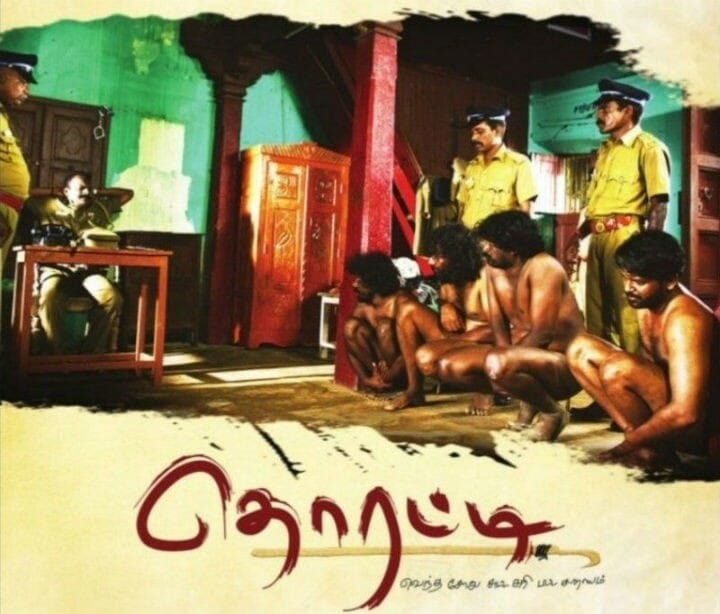 Mayan (Shaman Mithru) is a naive and care free youngster who hails from the family of shepherds. His family is forced to move to a village in Ramanathapuram due to severe drought in their native land, which they believe to have occurred due to the backfire of the curse of Mayan’s father. Their relatives in the new village aid them with necessary things to start over their life again. Mayan soon meets Semponnu (Sathya Kala) a woman with a strong spearhead character in the village and falls for her.

Meanwhile, we get to know about the three wastrels in the village (Sundarrajan, Muthuraman, and Chellam Jeyaseelan) who would go to any extent just to get ‘vendha soru, sutta kari, patta saarayam’ for a meal. On one instant Mayan is put in a tough spot and the trio comes to his rescue. From then in the pretext of being grateful to them he begins to do things for them that would even put his family in trouble. His gratefulness to the gang goes way out of limits that he butchers his own goat and cooks it himself to give the gang their sutta kari. The trio uses his impressionable and naïve nature to their advantage and turns him in to an alcoholic. The family members and people around him caution him about his bad company. But Mayan is so out of his head that he would not pay heed to their advices. The family decides to get him married to Semponnu in order to make him responsible and stop him from falling prey to bad ways of life.

Mayan comes highly inebriated to their engagement. This is where the character of Semponnu stands out instead of getting upset and shredding tears she slaps him to bring him to sober state. Their marriage does not incite a good reaction in the gang they want to feast on the happiness of the couple. But soon Semponnu makes Mayan realize that his friends do not want his friendship and they are only after his money. Now Mayan wants to badly avenge the people whom he presumed as his friends as he feels betrayed. Will Mayan go after his friends or chose to give up his vengeance and lead a happy life with Semponnu, is what makes the rest of the movie.

Shaman Mithru has given an okayish performance but that does not affect the character of Mayan as the nature of the character is such. Sathya Kala as Semponnu steals the show with her outstanding performance. She shines in the role of a strong woman and outdoes every other artist in the flick with her natural recital. The rest of the cast has delivered what was asked of them.

On the technical end, Kumar Sridhar’s camera has covered the nature of the village with the obstinate essence of nativity which is an absolute delight to watch on screen. Musician Ved Shankar Sugavanam’s numbers are a big plus in building the romance in the hard-hitting world that we get in to.

Marimuthu has crafted the character of Semponnu wonderfully and even better was his casting choice to go with Sathya Kala to portray the character of a woman who not only puts up with the mayhem that the person she loves brings in to her life but to pull him out of the misery that he is in to. The director’s idea to build the story on the concept of Thorati which is used to keep the goats in line as well as to wade off predators from attacking the goats is worthy. Here Semponnu is the Thorati who saves Mayan from going out of line in life. The lack of proper screenplay and running time makes the film a little dragged towards the end.

On the whole, Thorati could have been much better with a neat screenplay and short running time.