Nayagi is yet another horror comedy movie, directed by Goverdhan Reddy and on behalf of Giridhar Production House, the movie was produced by Giridhar Mamidipally and Padmaja Mamidipally. The movie features Trisha, Ganesh Venkatraman, Sathyam Rajesh and Sushma Raj have played lead roles. Raghu Kunche has composed the music and the background score was made excellently by Sai Karthick. Gautam Raju has looked after the editing part for the horror movie. 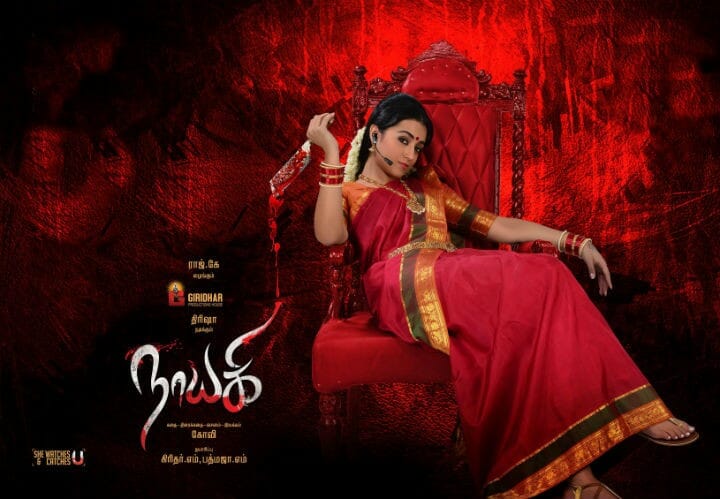 Jagadeesh Cheekati has looked after the cinematography work phenomenally. Sri Then Aandal Films Company has distributed the movie. The film got released in Telugu alone on 15th July 2016 with high anticipations, but has failed to prove in box office, getting mixed to positive reviews and in Tamil it was released on 16th September.

The story of Gayatri is quite routine schedule and is set amidst a haunted house on the outskirts of Hyderabad. Sanjay (Satyam Rajesh) and his girlfriend Sandhya (Sushma Raj) decides to get away from the city to have a good time during the weekend.

As they begin their journey, some unwanted incidents happen and the couple end up taking shelter in this haunted house. The evil spirit Gayatri (Trisha) starts getting behind their lives and keeps scaring them to death. How do the couples survive is the rest of the story. One of the biggest plus point of the film is Trisha’s character. Her performance deserves a big round of applause.

Young actress Sushma Raj has done a wonderful job in her innocent role and the opening sequence and Trisha’s entry are the major highlights of the film. Trisha has proved her individuality. The camera work done by Jagadeesh is good. Raghu Kunche’s music is just above average. We can watch the movie just to see the acting of Trisha and rest is average and a usual one.

Overall, a bland horror movie with no thrills or chills.