The specialty of crime thrillers is, they never go out of favor, among both the audience as well as the creators. Despite the inestimable number of dramas made on the genre, there will always be room for something fresh and mind boggling. Director Badri Narayanan tries to use that space to create a gripping psycho crime thriller. The movie is of a cat and mouse game played between a murder convict with a medical condition and a cop who is dealing with post-traumatic stress disorder. Actor Sundar C who was last seen in the horror drama Aranmanai 3 is back on screens with his psychological action thriller Pattampoochi. Actress Honey Rose has played the female lead role in the film. So, how has the entertainer come out? Will it aid Sundar C to revive his image as a bankable lead hero and establish Jai as a star antagonist of Tamil cinema? To know that let us get into the movie review. 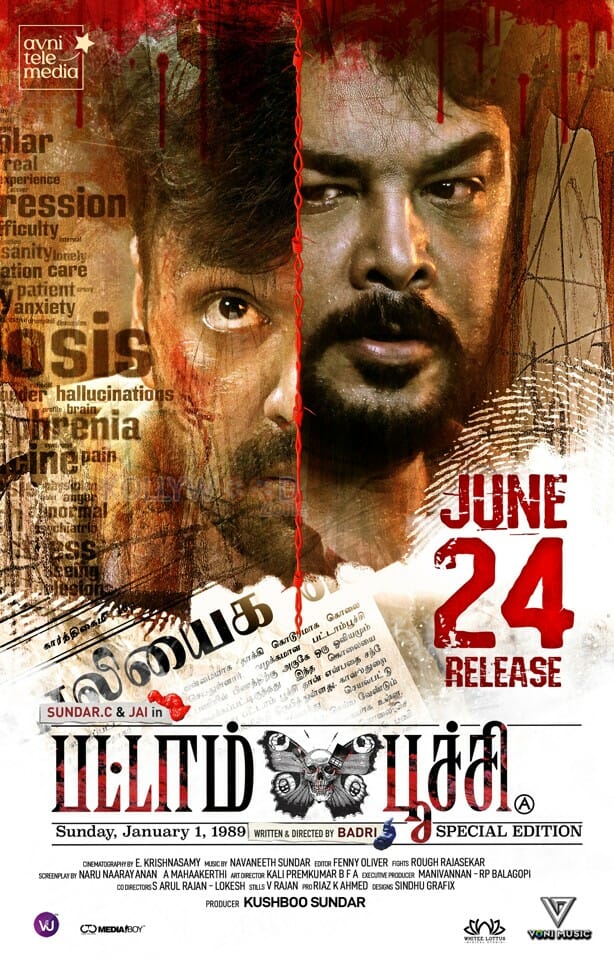 Pattampoochi is set in the 1980’s where it opens with journalist Vijayalakshmi (Honey Rose) in a prison bracing herself to interview Sudhakar (Jai), a murder convict awaiting capital punishment. The latter had written to her asking her to bring out his side of the story. During the course of the interview, Sudhakar claims to be innocent and that he has got nothing to do with the murder. Vijayalakshmi refuses to buy into his innocence claim. To her disbelief, Sudhakar switches gear and tells her that he has committed seven such gruesome serial murders without leaving behind any trace under the alias of Pattampoochi but not this one. He requests her to break his confessions on the print media and promises her to give details about how he committed the crimes. In the parallel, the seven murder cases are assigned to Kumaran (Sundar C), who is dealing with his own personal loss and prefers to be on the desk job.

He begins his investigation without the knowledge that all the murders were committed by Sudhakar, who has already been apprehended. Vijayalakshmi shares a good rapport with Kumaran. So, she shares with him the intel that Sudhakar revealed to her. When Kumaran tries to read Sudhakar’s motive, he realizes that the latter is actually planning to prove his innocence in the court and get away with the murders. Is Sudhakar innocent as he claims he is, if he is not, can Kumaran with his psychological shortcomings stop Sudhakar and prove it, is what makes the rest of the flick.

Of late, Tamil cinema is starting to witness films with grisly violence – violence that were not previously depicted and were just meant to be understood – portrayed on screen. If not in the lines of director Arun Matheswaran’s Rocky and Saani Kaayidham, director Badri Narayanan’s Pattampoochi is just levels short from them. But the thing is, the violence here is pointless. Director Badri Narayanan opens Pattampoochi on the right note with putting a suspense hook on the audience right away into the film. Up until a few portions before the first half he does show promise of cooking up an intense serial killer drama. Towards the end of the first half things start to get inept. In the second, it is clumsiness all over. From the way he tries to shape his characters to the scenes he stages; everything seems like a defused artillery in an arsenal.

His attempt to make Sudhakar come across as a petrifying psychopath is rather hilarious. Sample this, at one point the character says, “Have you ever seen mother die? It would be fun to watch.” Seriously? Not even a bit of effort to be creative? We are told that the antagonist is astute but his behavior seems like that of a kindergarten child. Even, they are a lot sharper these days. It is quite hard to comprehend why the story is set in the 1980’s. And the director’s recreation of the 80’s is just having Ambassadors, and Maruthi 800s as the mode of transportation. Where in the language, costumes, and the atmosphere is plainly present-day. Film maker Badri Narayanan is ambitious. He bites more than what he could chew and ends up letting a potential plot go to dust.

Actor Sundar C’s stout physic makes him perfect for the cop role. He does what he has been doing in the Aranmanai franchise. He has become well versed with mannerism. Actor Jai as antagonist tries his best to make an impact. But he just comes across as a desperate amateur artist overplaying his part to exhibit his acting prowess. Actress Honey Rose does not have much to offer to the proceedings. Nonetheless, she has done justice to her role. Comedian Imman Annachi does not serve his purpose of why he was brought on board. Perhaps, it is because of his poorly written part. Actress Manasvi Kottachi is effective. Actor Leo Sivadass is adequate. The rest of the cast has delivered what was asked of them.

On the technical front, music director Navaneeth Sundar, and Jai’s tracks are not inspiring. Even Navaneeth Sundar’s background score is just cacophonous and deafening. Cinematographer E Krishnasamy has covered the drama in the best way he could. Editor Fenny Oliver has put his scissors on the right spots to trim out the failings in his colleague’s work.

On the whole, actors Sundar C and Jai’s Pattampoochi is merely a pointlessly violent drama that puts our patience to great test.