Not often, we get to witness child-based dramas in Tamil cinema. It is a rarity. In that sense, My Dear Bootham is special. The additional delight is it being a fantasy film. My Dear Bootham is the tale of a kid who accidentally releases a genie, and as being grateful for it, he starts to aid the kid in solving the problems in his life. Actor Prabhu Deva who was last seen in Tamil in the mass action entertainer Theal is back on screens with his children’s fantasy comedy movie My Dear Bootham. Actress Remya Nambeesan has played the female lead part. Director N Ragavan has helmed the drama. So, how has the children’s fantasy comedy drama come out? Is it solid enough to entertain the kids and put actor Prabhu Deva in their favorite actor’s list? To know that let us get into the movie review. 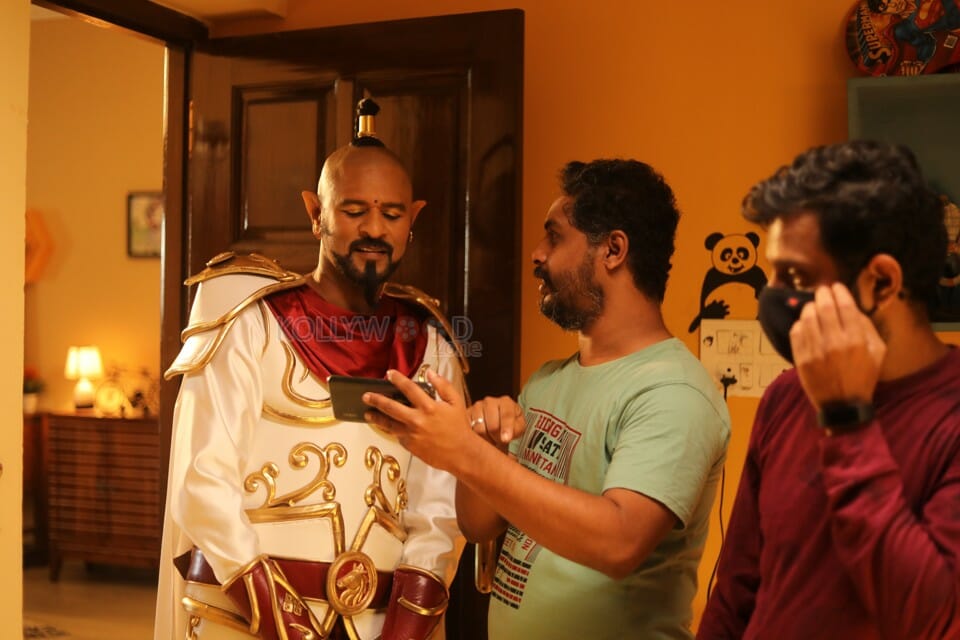 My Dear Bootham revolves around a kid named Thirunavukarasu (Ashwanth Ashokkumar), who lives with his mollycoddling mother (Remya Nambeesan). Thirunavukarasu has stammering issue because of which he is ridiculed at school by his classmates. Even his teacher (Samyuktha Shanmuganathan) takes an insensitive stand on him. One day, Thirunavukarasu stumbles up on a figurine and takes it. He accidentally frees Karkimuki (Prabhu Deva), a genie which is visible only to Thirunavukarasu. When Thirunavukarasu first witness Karkimuki, he blackouts. He fears Karkimuki. But for Karkimuki he is his savior. So, Karkimuki tries to gain the trust of Thirunavukarasu.

My Dear Bootham tries to play the modern age Aladdin. Surprisingly, it does manage to do it successfully to an extent. But the problem is, that extent is not enough for a two-hour long period. Director N Ragavan’s writing is the culpable one here. Most of the bright potential moments are debilitated because of his uncreative way of writing. For instance, the portions involving Thirunavukarasu and Karkimuki could have been exploited more to stage situations that facilitated situational comedy. But it has not.

When we get to the details of relationships, it is either superficial or dramatic. The relationship of Thirunavukarasu and Karkimuki is like a father and son bond. But we as an audience could not feel that. Even Thirunavukarasu’s connection with his overbearing mother creates a feel that it wants to convey something but ends up going nowhere. The animation bit involving the backstory of Karkimuki is enjoyable. But then, the VFX falls short of quality depriving us of an absolutely satisfying experience. This is the case of My Dear Bootham as a whole, it gets intriguing and subsequently a bad work ruins it.

Generally, in Tamil cinema when a child-based drama gets made, storytellers follow the unvoiced rule to add up some elements that have something for the adult audience as well. For instance, My Dear Bootham’s inspiration Allauddinum Albhutha Vilakkum. But director N Ragavan has decided to keep My Dear Bootham as an out and out child drama. This clarity helps in shaping the film. It is sort of both positive and negative for the drama. As after a point this clarity fades and he seems to have gotten stuck in the dichotomy of whether to keep the film as a light hearted children drama, or to write stuff to hold the attention of the adult audience. In that dilemma, he turns My Dear Bootham into a melodramatic entertainer in the second half. And it does not take long for the flick to lose stream.

Actor Prabhu Deva is apt to play Karkimuki. In fact, it seems like a tailor-made role for him. He pulls off his part effortlessly making it fun for us to watch him play his part. Child artist Ashwanth Ashok Kumar makes an impact as a performer. He shines even in the emotive portions. He seems like a good find for Tamil cinema. Even the other child artist Aazhiya does her part well. Actress Remya Nambeesan does justice to her part as a doting mother. Actress Samyuktha Shanmuganathan serves her purpose for being brought on board. Actor Shakthi Rithvik is functional. Actor Master Param Guganesh is adequate. Actor Suresh Chandra Menon is effective. Comedians Imman Annachi and Swaminathan are inconsistent in their attempt to provide us with comical relief. The rest of the cast has delivered what was asked of them.

On the technical front, music director D Imman is clearly not at his best. His songs do not last long in our memory. But he adds little value to the flick with his background score. For a fantasy child drama, cinematographer U. K. Senthil Kumar’s frames should have been more colorful. Editor San Lokesh has done a fine job trimming the flick to keep the run time crisp. Though one could not help but feel it could have been even crisper.

On the whole, actor Prabhu Deva’s My Dear Bootham is let down by the same factor which most films of Tamil cinema suffer from – lack of a proper writer.