Aranmanai 3 takes you by surprise. Seriously! Decades of exposure to the plethora of mind-numbing horror comedies has got us in to a sluggish thinking that horror comedy genre cannot get any low than it already has. Bam, comes in the third installment of the Aranmanai franchise to tap you on your shoulders and wake you up to the hard question, ‘do you really think so?’ A sense of shock prevails with a trance state of stillness. Begins Aranmanai 3. In 2014, when the first flick of the franchise hit the screens, we had a substantial sect of family audience turn up to the theaters to enjoy the entertainer. Half of whom had become a fan of the film tempting film maker Sundar C to build a brand around Aranmanai. Seven years in to the franchise, not sure how many still remains a fan for it. So, to what extent does Aranmanai 3 test our strength? To know that let us get in to the movie review. 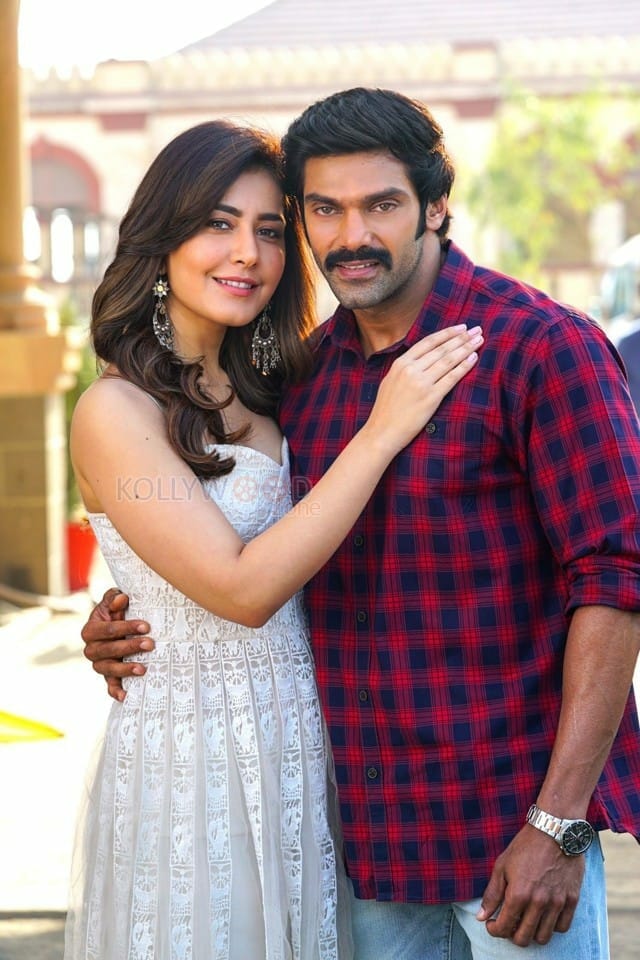 The film is set in a remote bungalow owned by Zamindar Rajashekar (Sampath Raj). He lives with his family in the bungalow. His wife Eshwari (Andrea Jeremiah) had passed away years ago. The couple has a child named Jyothi (Raashi Khanna). After Eshwari’s demise, lacking the patience to bring up his daughter, and unable to stand her nagging about the presence of ghost in the house, Rajashekar had put her in a boarding school. Life moves smoothly for Rajashekar. Trouble instigates in the form of a temple that has been under the maintenance of his family. In a petition about the existence of a secret room in the temple, the magistrate pass judgement for the room to be opened. When the room is opened, to everyone’s shock, there is nothing in it. Days later, Rajashekar’s driver Durai (Vincent Ashokan) commits suicide. Meanwhile, Jyothi returns home after many years. She meets Saravanan (Arya), an electrician and falls in love with him.

Jyothi begins to sense the presence of ghosts in the palace. She seeks the help of Ravi (Sundar C). Ravi examines the place and encounters the ghost. He arranges for a prayer in the bungalow to exorcise it. The shamans are brought to the palace. They begin their sermon to trap the ghosts. They succeed. But in an unfortunate turn of events, they are forced to set them free. Rajashekar is horrified by these events and goes in search of a shaman living inside the forest. However, the ghost gets to him and tries to kill him. Fortunately, Ravi gets there in time and rescues Rajashekar. Why are the ghosts after Rajashekar’s life, does he have any secrets to protect, and will he survive, is what make up the rest of the flick.

If you are asked for a director who could make three films on a single plotline and turn it in to a franchise, the name you should be looking for is film maker Sundar dot C. A haunted bungalow, a family moves in, a ghost with a tragic past, heroines for the purpose of objectification, and himself as the savior of the family, with a climax that ends with a thumping devotional song. Why unnecessarily bother about script writing, story discussion, screenplay when you can make a film just like that? Why even allocate a part of the budget for the pre-production stage? Aranmanai 3 seem like a film made under such a process. Blatant minimal efforts across all cylinders.

Director Sundar C’s strong foot is building comedy. He has earned himself a reputation for it. In Aranmanai 3 he tears down what it took nearly 3 decades for him to build. Aranmanai 3 has a whole bunch of comedians, yet there is so little comedy. It is hard to figure out who the actual comedians of the film are. The writing, or if there was anything such as that, is so poor that even when the film moves in a serious tone, we could not help but laugh at the way the characters are made to perform. Especially, actor Sundar C’s performance. It serves the purpose for which a team of comedians were brought on board. After a certain point, with the proceedings you get a feeling of déjà vu. As there is a heavy hangover of Chandramukhi. Perhaps, Arya is given the name Saravanan to draw a connection between the two?

Actor Arya has just come from a quality film Sarpatta Parambarai. It is disheartening to see him essaying such a scopeless role. He looks helpless in the flick. Actor Sundar C does what he has been doing in the last two versions of Aranmanai. Actress Raashi Khanna is just there to fill the female lead space. Actress Andrea Jeremiah has delivered what was asked of her. It is hard to discern actress Sakshi Agarwal’s presence in the film. Actor Sampath Raj in yet another filler role. Comedy artists Vivek, Yogi Babu, Muna Nandhini, Nalini, Cell Murugan, Manobala suffer merely because of how poorly the comedy is written. The rest of the cast has delivered an average performance.

On the technical front, music director C. Sathya’s songs do not hold our attention for long. And his background score is loud and deafening. Perhaps, he tried to play in accord to what unfolds and being clamorous is what he could do best. It is understandable. Cinematographer U. K. Senthil Kumar’s camera work is the final luggage on the already over boarded ship. Editor Fenny Oliver’s editing work must have been simpler and a fun filled one.

On the whole, Aranmanai 3 drains you of your mental strength and leaves you terrified, very petrified that even to think about stepping foot inside a theater screening a horror comedy drama in future seem scary.