Dhanush’s ‘Maari’ was neither a blockbuster hit or acclaimed by the critics, but the hero shocked everyone by declaring a sequel with Director Balaji Mohan who directed the original film. Thanks to the average first movie, we casually overlook the mistakes in the sequel. 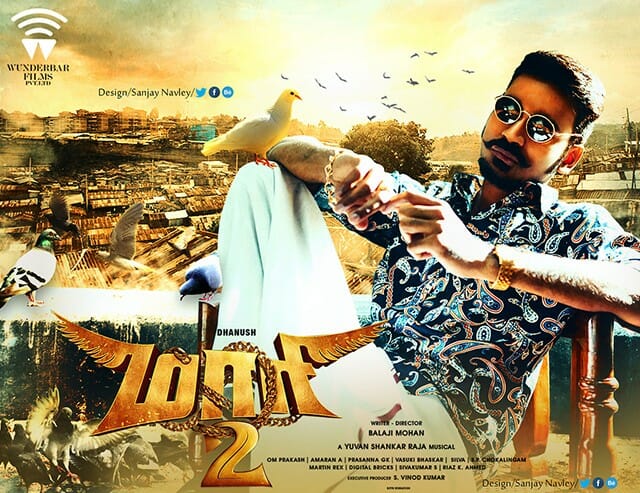 ‘Maari 2’ starts from where ‘Maari’ ended. Maari (Dhanush) still rules his locality with the help of his best friend Kalai (Kreshna). One thing he hates in his career is drug business, but the rival gang wants him to join with them so they can sneak it without any problem.

But, Maari strongly opposes the plan. Meantime, there is Beeja also known as Thanatos (Tovino Thomas) who has vengeance against Maari for killing his brother. When Beeja escapes from jail, he works with Maari’s rivals and plans a cunning scheme to separate Maari from Kalai.

Beeja’s idea works well and he nearly kills Maari and his lover Aarathu Aanandhi (Sai Pallavi). But they abscond, get married and settles in Tenkasi to lead a peaceful life. But situation forces Maari to return back to his area once again to finish off his rivals.

‘Maari 2’ has all masala ingredients needed for a commercial film. The first half highly depends on Dhanush’s character, but this film is packed with action, romance, friendship, father-son bond, comedy, and all other required ingredients. Especially, the emotional sequences are something no one expect in ‘Maari’ series.

Though Dhanush is the screen stealer with his trademark Maari slang and excellent performance, Sai Pallavi stuns everyone with her natural acting. Her cheeky Chennai slang, sunning dance moves, and fantastic acting in the emotional scenes lift the movie. Sai Pallavi and Dhanush will make you shake legs for ‘Rowdy Baby’ song.

Tovino Thomas looks lethal in the first half but gradually turns a parody and in the climax, he gets beaten up like usual villain. It looks like the director was in a hurry to end the movie as the agenda was to portray the climax sequence with a shirtless Dhanush beating the villain to a pulp. Some of the inane dialogues like ‘’If you are bad, I am your dad” and “Nan kettavanukku ellam kettavan” may interest the masses as the movie is dedicated to B and C youth audiences.

The supporting cast like Robo Shankar, Varalakshmi, Krishna, and Vinoth have done their parts correctly. Yuvan Shankar Raja proves he is the best for scoring background music, but the songs are dispiriting and not on a level with the first part. The slow motion shots by the cinematographer Om Prakash are stunning and he has also excellently captured the panoramic Tenkasi locality. Editor GK Prasanna has also done a commendable job in editing the movie, which has numerous things to convey under two and half hour.

Even though the story is predictable, hurried climax, and loud packaging are some of the drawbacks, ‘Maari 2’ may attract audiences who love clichéd films.