The clash between the good and bad is the essence of any action-based vigilante films. Jayam Ravi, who is one of the most persuasive and apt heroes to portray an honest police officer is back in uniform. This time, Jayam Ravi’s rival is not as powerful as his previous villain Siddharth Abhimanyu in ‘Thani Oruvan’. There are 4 young men, sons of rich and well-to-do businessmen and government officials in the city. Briefly, ‘Adanga Maru’ is a simple revenge thriller movie, and what makes it exciting is the exceptional performance of Jayam Ravi and the inventive ways with which he takes revenge! 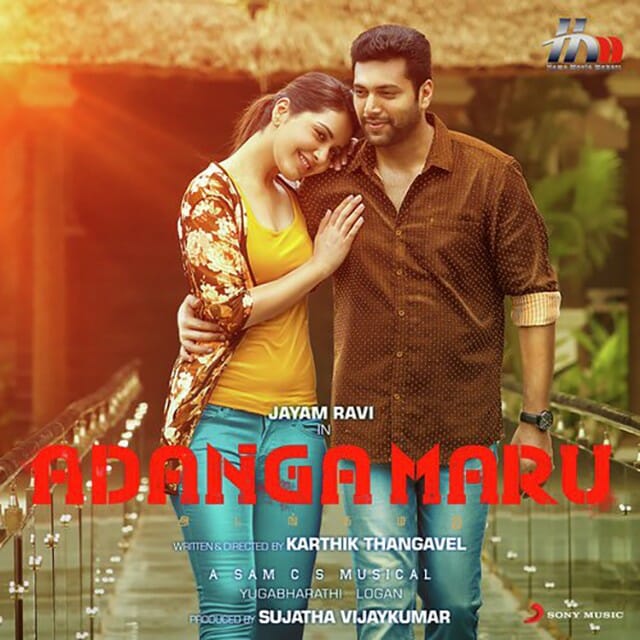 The film is about Subash (Jayam Ravi), a young Sub Inspector of Police and also an IPS aspirant. In the introduction sequence, we come to know that he is a people-friendly police officer who highly respects the public and is always willing to help and safeguard them. But, his higher officials are dishonest and puts unnecessary pressure on Subash and hence he is compelled to follow a different path to help public.

In one such occasion, Subash suspects that a girl who was found dead was killed, but his higher officials are in an urgency to close the case as a suicide. When Subash investigates further, he finds that 4 young men from rich families had molested the girl and also spoiled the lives of numerous young girls in the past.

Just when Subash has succeededs to put the 4 criminals behind bars, their dads save them and they walk away as there is no solid proof to the crime. Subash also gets suspended and reaches back home only to learn that all his family members are murdered for revenge. The rest of the movie is about how Subash turns as a vigilante and utilizes his cyber knowledge to kill all the 4 youngsters.

Though the core storyline of ‘Adanga Maru’ is nothing unusual, it is well shot, well edited and excellently performed by its leading artists. A big ‘Kudos’ to the brilliant performance of Jayam Ravi, who carries the complete movie on his broad shoulders. The hero’s angry young man personification and toned body works are a huge plus for the film. The interrogation sequences with Sampath is one of the best scenes. The rest of the cast including Sampath, Alagam Perumal, Munishkanth, and Mime Gopi have acted their characters well. Rashi Khanna looks stunning and she does what’s anticipated of her.

Director Karthik Thangavel deserves a big applause for handling such a sensitive subject without losing focus. The dialogues against abuse are enlightening and he mainly depends on cyber techniques for the revenge portion, which is exciting.

Music director Sam CS and cinematographer Sathyan Sooryan have done a good job. Editing by Ruben is perfect and there are no unwanted love scenes or dances which generally disrupt the story of any mass action-based commercial movies these days. On the whole, it is an engaging action thriller film.