The much-anticipated sequel of ‘Saamy’ has hit the screens and let’s see whether it’s worth the wait. Well, we don’t want to spoil the surprise, so this is a non-spoiler review! Vikram has done dual roles as DCP Aarusamy and Ramasaamy IPS (Aarusaamy’s Son). 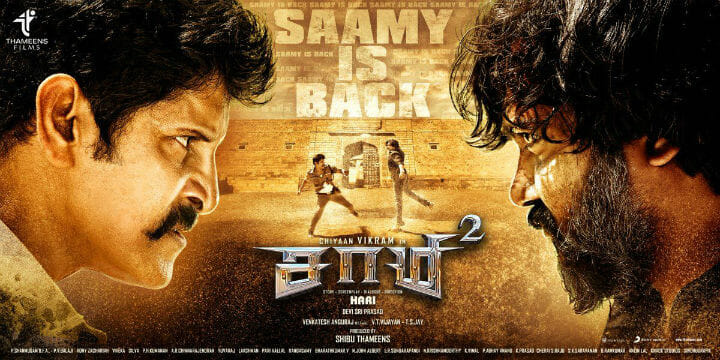 So naturally, we have Perumal Pichai’s son Raavana Pichai as the nemesis. If Bobby Simha is Raavana Pichai, we also have John Vijay as Devendra Pichai and OAK Sundar as Mahendra Pichai. With an interesting premise, we expected a nail-biting clash, but all we get is a template boring stereotype hero-villain fights.

So, what is the movie all about? Saamy (2003) ended with the line “Saamiyin Vettai Thodarum” implying that the hero will continue his hunt for the criminals. At the same time, Perumal Pichai son Raavana Pichai learned that his father was murdered by Aarusaamy and he kills everyone who is responsible for his father’s fate. He also establishes a money laundering network and at this juncture, he crosses lines with Ram Saamy who is the son of Aarusaamy and how Ram Saamy gets his revenge is what Saamy 2 all about.

Soori should be banned from Tamil Cinema for a while as his comedies don’t evoke much laughter. Keerthy Suresh as Radhika has done what Shruti Haasan did earlier in ‘Singam 3’.  Aishwarya Rajesh has replaced Trisha as Bhuvana and she’s nowhere near the original.

Sorry, Aish, you have given your best but its not as good as the original. Uma Riaz, Sajeev, Chaams, Imman Annachi, Gunalan, are just fillers. Harris Jayaraj made a magic with his music in the first part. Devi Sri Prasad totally lost it and his music is literally haywire. Editing could have been crisp.

Overall, Saamy 2 is a failed sequel.