Actor G. V. Prakash Kumar and his obsession for doing romantic comedies, does not seem to end anytime soon. He never takes you by surprise when it comes to his romedy flicks. Most of his entertainers under that genre open with a nuisance intro song, and have an aimless young man who with the help of his friend, deploy all crass ways to woo a woman. Vanakkam Da Mappilei is no exception.

When busy musician G. V. Prakash Kumar turned hero, he was literally churning out movies like a slot machine locked on Jackpot spewing out coins. It was a time when even professional actors wondered how the composer manages such a hectic schedule. But surprisingly for some reasons the actor has not had a single release last year. Perhaps he got busy with his musical commitments. The Naachiyaar star was last seen on story teller Chandramouli’s romantic comedy 100% Kadhal which hit the screens in the year 2019. After a year gap the actor is back with yet another romantic comedy with a funny title Vanakkam Da Mappilei. Is the flick as funny as its title? To know that let us get in to the movie review. 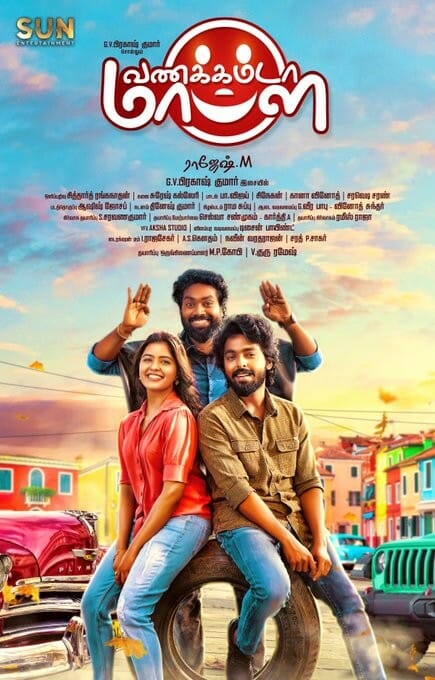 Vanakkam Da Mappilei follows the lives of Aravind (G. V. Prakash Kumar) and his friend Swaminathan (Daniel Annie Pope). Like most of G. V. Prakash Kumar’s films even here the problem is the inability to succeed in his love life. Both of them are dejected because of it. So they set a weird goal for themselves – to find a suitable girl and get married on the same day in the same marriage hall. They both get busy with their lives. Years go by, Aravind becomes a marine engineer. Meanwhile, Swaminathan’s engagement is fixed with his distant relative. When Aravind comes to know about this, he goes to his engagement and reminds his friend of their sacred vow. Not just that he bizarrely asks him to postpone his marriage for 6 months stating he will find a right woman for himself within that span and they can get married as they swore.

Stunned by the developments Swaminathan suggest Aravind to take his fiancé’s sister as his life partner. As a casual routine in his movies he passes a tactless comment for it, he asks, “Market la vikkathathu laam enakku thalli vidriya?” For many Tamil directors comedy translates to passing insulting remarks on someone. Aravind meets Thulasi (Amritha Aiyer) and yes he falls for her. And what happens when a Tamil hero is smitten by a heroine? Yep, you are right. He stalks her. Eventually, she falls in love with him. But Thulasi’s father (Ananda Raj) walks in to the frame and lays a condition that Tamil cinema has never witnessed before. He is a widower and so he asks Aravind to find a suitable bride for him in order to have his daughter’s hand in marriage. Will Aravind take up the challenge and find an apt bride for his future father in law, to marry Thulasi on the same day his friend ties the knot, is what makes the rest of the entertainer.

Actor G. V. Prakash Kumar and his obsession for doing romantic comedies, does not seem to end anytime soon. He never takes you by surprise when it comes to his romedy flicks. Most of his entertainers under that genre open with a nuisance intro song, and have an aimless young man who with the help of his friend, deploy all crass ways to woo a woman. Vanakkam Da Mappilei is no exception. What do you make of the title Vanakkam Da Mappilei? You get a hunch that you are going to take a risk having decided to watch the film. And your hunch turns out right. Vanakkam Da Mappilei offers a testing experience. But to be fair, the drama has its moments, with little efforts in the writing department; it could have offered us a better entertainment. Director Rajesh’s writing of comedy scenes is so bad that even with a highly potential cast he could not make us laugh, if not throughout the movie at least for considerable portions.

Actor G. V. Prakash Kumar undermines his own acting potential by signing projects with characters that has no scope to perform. We are tired of seeing him play the same absurd reckless young man character film after film. Actress Amritha Aiyer does not do justice to her role. Actors Ananda Raj and Jayaprakash are effective as usual. It is good to see actor Ananda Raj in comical roles. He outshines the comedians with his classic expressions and sharp timing sense. Apart from few portions comedian Daniel Annie Pope does not serve the purpose of his presence. Comedian M. S. Bhaskar holds our attention despite his short screen space. The rest of the cast has delivered a passable performance.

On the technical front, G. V. Prakash Kumar as the music director is clearly not at his best. His songs and background scores are not up to his standards. Cinematographer Siddharth Ranganathan has done a decent job covering the flick. Editor Ashish Joseph has upheld the work of his colleague with his edits.

On the whole, Vanakkam Da Mappilei was meant to be a comedy drama but when it fails to deliver on that, it has nothing else to hold our attention.