Velainu Vandhutta Vellaikaaran is a Tamil comedy movie which was written and directed by Ezhil and produced by Vishnu for Vishnu Vishal Studios, Ezhil and Rajan Natraj for Ezhilmaaran Production alone with Fox Star Studios .The movie features Vishnu and Nikki Galrani have paired for the very first time in movie and in the leading roles. 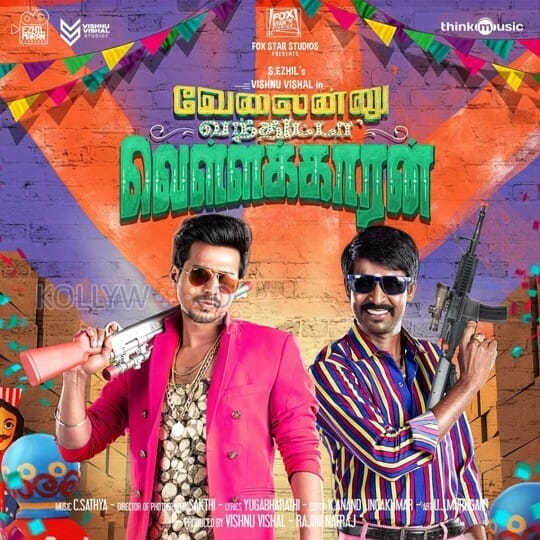 The music was composed by C. Sathya, the film began production during August 2015, and was released on June 3rd. The director Ezhil has signed on Vishan to portray the lead role in the movie during June 2015 and has held discussions with Keerthy Suresh and Taapsee Pannu about portraying the lead female role, though neither of the pair signed on to play the heroine role and so Nikki Galrani has later accepted to work on the movie.

The plot is simple Vishnu and Robo shankar are close friends and Robo Shankar is close with Minister. Minister’s nephew and another Politician doesn’t like them and when minister passes away he reveals secret about 500 Crores and this secret was heard by Ravi Maria and Naren. Meanwhile, Vishnu falls in love with Nikki and that creates another trouble. How all troubles are solved forms the rest of the story.

The director Ezhil has earlier directed sentimental touching movies like ‘Thulladha Manamum Thullum’, ‘Pennin Manadai Thottu’ and ‘Poovellam Un Vaasam’. But later he has also directed ‘Raja’, ‘Amudhe’ and ‘Deepawali’, were all unsuccessful and so he has moved away from the film industry for a while. After five years he has come again by directing comedy movies like ‘Manam Kothi Paravai’, ‘Vellakkara Durai’ and ‘Desingu Raja’ has earned good collections for the box office.

In ‘Velainu Vandhutta Vellaikaaran’ Ravimariya has acted as a comedy villain. The cinematography work was carried out by Sakthi. Actors like Aadukalam Naren, Sonia, Robo Shankar, Rajendran, Vaiyapuri and Swaminathan have acted in supporting roles. Ananda Lingakumar has done the editing work. Some scenes are not related to the movie and the length of the movie is not too long Nikki Galrani has acted glamorously and the songs were not up to the anticipation.

Overall, the movie is ‘No Brains, Pure Fun’ kinda genre !